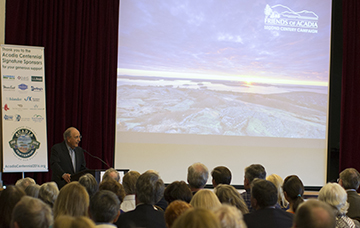 BAR HARBOR, MAINE— On July 8, 1916, Acadia National Park was first set aside as a protected reserve for enjoyment and inspiration of the American people, through the generosity and foresight of individuals who loved this unique coastal landscape. On the 100th anniversary of that event—Friday, July 8, 2016—more than 300 members, volunteers, and supporters of Friends of Acadia (FOA) gathered at the Bar Harbor Club for the organization’s Annual Meeting, to mark the Acadia Centennial and look ahead to the next century of park conservation.

The peak moments of the event came with the public launch of the Friends of Acadia Second Century Campaign, a $25 million campaign to address Acadia’s most urgent challenges as the park enters its second century and ensure that Acadia will thrive for many years to come. Making the announcement, FOA president David MacDonald said, “We come together today to celebrate Acadia. We come together to celebrate community, and we come together to honor those who came before—their foresight and generosity. Today is the first day of Acadia’s second century, and we want to you think about that, and think about how you can be involved. This is a time and a place when people, and ideas, and resources, and passion, will come together to blaze new trails in conservation.”

MacDonald honored the FOA committee charged with the success of the campaign, including honorary chairs Senator George Mitchell and Mr. David Rockefeller Sr.; and committee chairs Anne Green, Rob Leary, and Ann Rockfeller Roberts. Said Green, “Our national park is on the precipice and must address the needs of the next hundred years. Gifts from nature we can’t buy, but must make a long-term investment in.”

Senator Mitchell spoke with gratitude of the legacy of his co-chair and the Rockefeller family at Acadia and recalled that the first time he met Mr. David Rockefeller more than three decades ago, it led to their working together on the effort that led to the restoration of Acadia’s carriage roads and the endowment that Friends of Acadia now seeks to bolster as part of the Second Century Campaign. He noted, “every one of us who has had the tremendous pleasure of walking, running, skiing, taking our kids out on the carriage roads…can now look forward to maintenance and even improvement for a very long time to come. We’re very fortunate, really, first to be Americans…and second, being here, which gives us an opportunity for shelter, refuge, and respite from the turbulence in our country and in the world.”

In addition to Acadia’s carriage roads and trails, the Second Century Campaign will focus on the intertwined goals of Wild Acadia, to protect Acadia’s natural resources; The Acadia Experience, to address challenges of Acadia’s increasing popularity; Tomorrow’s Stewards, to get more young people outdoors and involved in Acadia’s future; and the FOA Endowment, to ensure FOA’s long term sustainability in its support of Acadia and the surrounding communities.

Acadia National Park Superintendent Kevin Schneider told the audience, “Acadia needs friends. Friends of Acadia is known throughout the National Park Service as setting the bar for what a friends group can do.” He asked attendees to continue to step up as donors, advocates, and volunteers for the park, but added that he believes that equally important is to “get out there and enjoy the park. Get out there and continue to nurture your connection to your wonderful place.”

Other highlights of the meeting included a standing ovation during the presentation of the Marianne Edwards Distinguished Service Award, Friends of Acadia’s highest honor, to Acadia Centennial Task Force Chairs Cookie Horner and Jack Russell for their inspired and tireless leadership of the yearlong effort that has brought more than 430 organizations, businesses, and individuals together as Acadia Centennial Partners to celebrate the past and inspire the future of the park.

The Kelly Farm Five performed their original song The Acadia Waltz, and Acadia’s poet laureate, Christian Barter, read a poem composed in honor of the centennial, “The Venture,” in which he urged, “May we remember, today, / and also the today of tomorrow, / what it took to keep this place for us…”

After the meeting, attendees enjoyed a “birthday party” reception outside on the Bar Harbor Club patio overlooking Frenchman Bay, with cakes decorated for the Acadia Centennial and Friends of Acadia’s 30 anniversary (also in 2016) and Acadia-themed Gifford’s ice cream. 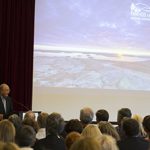 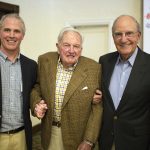 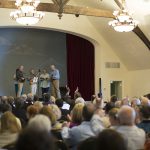 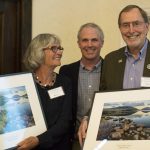 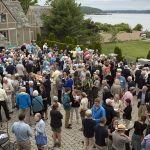 About Friends of Acadia

Friends of Acadia is an independent nonprofit organization and the primary philanthropic partner to Acadia National Park. Its mission is to preserve the outstanding natural beauty, ecological vitality, and cultural distinctiveness of the park and its surrounding communities, for the inspiration and enjoyment of current and future generations. Since 1986, FOA has granted more than $23.7 million for park and community conservation. Friends of Acadia has over 4,500 members and makes possible the employment of more than 150 workers directly serving Acadia. Friends of Acadia can be found online at www.friendsofacadia.org.