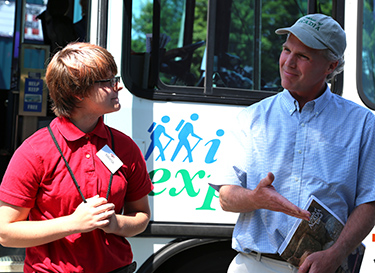 ACADIA NATIONAL PARK, MAINE – On Monday, June 30, supporters of the Island Explorer greeted the bus system’s 5-millionth passenger at the Bar Harbor Village Green. Marisa Gray from Otter Creek disembarked from the Blackwoods/Sand Beach bus at 10:44 a.m. to the news that she was the milestone passengers on the free, propane-powered bus system. Representatives from Acadia National Park, L.L.Bean, the Maine Department of Transportation, Friends of Acadia, and Downeast Transportation applauded her efforts to ride the environmentally friendly bus and awarded her with a goodie bag and gift card from L.L.Bean and a gift membership to Friends of Acadia.

The Island Explorer is a fare-free, propane-powered bus system that runs through Acadia National Park and the surrounding communities. Since the transportation system’s inception in 1999, the buses have eliminated over 1.88 million private vehicle trips and prevented emissions of more than 17 thousand tons of greenhouse gases and 26 tons of smog-causing pollutants. If all cars and recreational vehicles (RVs) removed from the roads by the Island Explorer since 1999 were placed bumper to bumper, the traffic jam would extend from Bar Harbor south to the Florida Keys and then back up the west coast of Florida, through the Gulf states, and well into Texas.

Acadia National Park planner John Kelly commented that “The Island Explorer is key to helping people enjoy the park and reducing congestion in Acadia. We receive about the same visitation as Yellowstone National Park, but Yellowstone is about 60 times the size of this park. It’s a very small concentrated park, and the more opportunities people have to get on alternative transportation and relieve congestion in the parking lots and roads, the better visitor experience for everyone.” Otter Creek resident Marisa Gray was surprised to learn that her morning commute had earned her a spot in Island Explorer history.

Marisa is a year-round Mount Desert Island resident and a student at MDI High School. She caught the Island Explorer in Otter Creek to commute to her summer job at Hannaford Supermarket in Bar Harbor. She noted that her parents work off-island so she finds the Island Explorer very helpful for getting to work and getting around in summertime.

The Island Explorer is supported financially by Acadia National Park, the U.S. and Maine Departments of Transportation, contributions from L.L.Bean and Friends of Acadia, local municipal appropriations, fees from businesses that receive front door service, and passenger donations. A portion of every weekly and annual Acadia National Park entrance fee is dedicated to funding the Island Explorer’s operations.

Sue Moreau of the Maine Department of Transportation commented that “we at MDOT want to make sure we can preserve what everyone loves in the state of Maine: Acadia National Park and the communities that surround it. It’s a group effort to make sure we keep this system going…and we will be here and be partners forever.”

L.L.Bean’s relationship with the Island Explorer began in 2002 with the corporation’s historic $1 million gift to Friends of Acadia that enabled the Explorer to extend operations through Columbus Day each year. The gift also enabled the purchase and operation of two vans and bicycle trailers that carry bicyclists directly between the Bar Harbor Village Green and Eagle Lake. In 2005 and again in 2011, L.L.Bean renewed its commitment to Acadia and the Island Explorer, with support totaling more than $3.25 million. L.L.Bean’s Bootmobile joined the celebration in Bar Harbor on Monday afternoon.

Case Chandler, store manager at L.L.Bean’s Ellsworth outlet, presented the gift card and goodie bag to Marisa. “For us, it’s about a partnership,” he said. “It’s about getting outdoors, enjoying it, but being responsible to make sure that the folks behind us—generations to come—are going to have the same enjoyment.” David MacDonald, president of Friends of Acadia, thanked L.L.Bean for its commitment to the Island Explorer, saying “We owe much to L.L.Bean for their outstanding support of the bus system and Acadia National Park. Their corporate stewardship of Acadia is a model among the National Park System and is lauded every year by visitors on the annual Island Explorer passenger survey.”

Paul Murphy, General Manager of Downeast Transportation, the operator of the Island Explorer, praised the extended partnership that makes the bus system a success, saying, “We are indebted to our great partners for making this achievement possible. From L.L.Bean to Acadia National Park, Friends of Acadia, Maine Department of Transportation, our great communities and businesses, and most importantly our riders, who trust us with their visitor experience and choose to leave their cars behind when using the park, we continue to be awed by your commitment to this great project.”

MacDonald echoed that thought, noting that in rider comments every year, “really the only criticism that comes through is that ‘we want more—we want more routes, we want it earlier in the spring, later in the fall.’ This is a widely loved system and we are deeply appreciative of the public’s engagement. It wouldn’t work without people like Marisa deciding to get on the bus and make it work.”

The Island Explorer runs eight routes plus the Bicycle Express through Acadia National Park and the surrounding communities. The buses will run their full schedule through August 31 and then will operate on a reduced basis through October 13. Information and schedules are available online at www.exploreacadia.com.