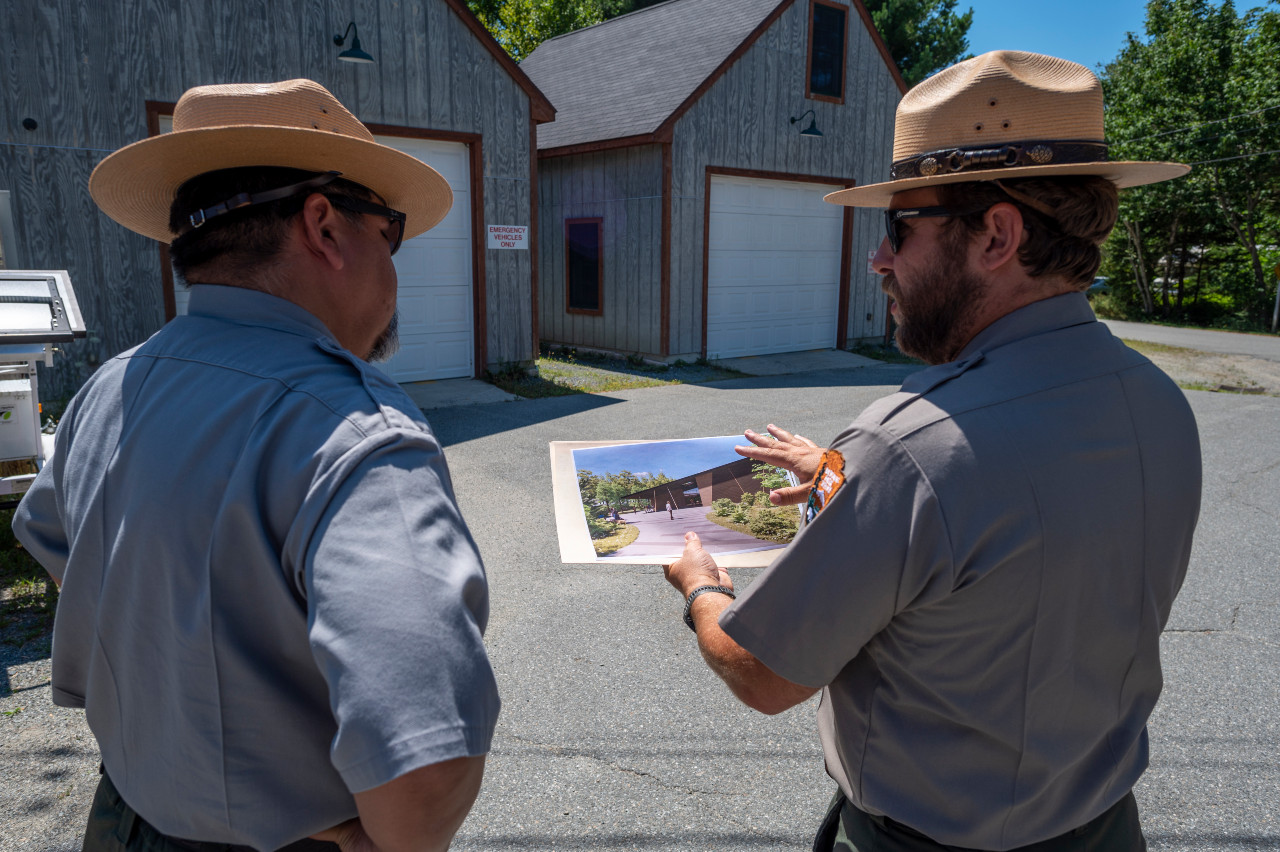 NPS Director Sams visits the site of Acadia’s future maintenance facility which will be funded by the Great American Outdoors Act to replace the current structurally unsound facility. (NPS/Jay Elhard)

BAR HARBOR, Maine – National Park Service (NPS) Director Chuck Sams visited Acadia National Park last week to meet with park staff and partners about shared priorities, including shared Tribal co-management, and see infrastructure improvements that are part of a concerted effort by the Biden-Harris Administration to address deferred maintenance and repair needs in national parks. Sams saw firsthand the positive impacts that funding provided by the Great American Outdoors Act (GAOA) and the Bipartisan Infrastructure Law will have on those who work in and visit the park. Last year, Acadia saw a record of over 4 million visits which contributed $411 million to the local economy.

A variety of funding sources are tackling Acadia’s estimated $134 million in deferred maintenance and repairs, led by $30+ million provided by GAOA. Sams toured Acadia’s current dilapidated maintenance facility which will be replaced with a modern structure that will comply with current code requirements and be appropriately sized to accommodate the maintenance needs for a park with 214 buildings, multiple campgrounds, 18 wastewater systems, and hundreds of miles of trails and roads. Another GAOA project will fund the rehabilitation of the potable water and wastewater systems in the Schoodic District of the park.

Sams was also briefed on the upcoming Great Meadow Wetland restoration project which is being funded with $500,000 from the Bipartisan Infrastructure Law. The Great Meadow wetland with its hiking trails, wildlife-viewing opportunities, and nearby visitor facilities is one of the most popular areas of the park. However, Great Meadow does not currently have the function or diversity of a healthy wetland. The work will improve water flow and quality, install culverts and boardwalks to enhance the recreation value of the trails and reduce flooding, expand wildlife passages, remove invasive plants and restore native plants appropriate for future climates.

Another ecosystem restoration project supported by the Bipartisan Infrastructure Law will take place next year in the Bass Harbor Marsh. Both projects are leveraging partner funding from the Friends of Acadia and involve collaboration between Acadia National Park, Friends of Acadia, and the Schoodic Institute. The marsh is threatened by sea level rise and disturbances from invasive plants that have impacted 156 acres of uplands surrounding the marsh. It is the largest salt marsh in the park and is a culturally significant landscape for traditional harvesting of sweetgrass by Wabanaki people from the four federally recognized Indian Tribes affiliated with Acadia. Sams also met with Wabanaki scientists and sweetgrass gatherers, who are working to restore this culturally significant practice to the park.

Sams emphasized the NPS’s commitment that Tribal voices are represented in matters of shared stewardship on ancestral homelands. While attending the National Park Foundation board of directors and national council meetings in Bar Harbor last week, Sams also discussed ways the partner community can support and advance Tribal engagement and co-management opportunities with national parks.

While in Acadia, Sams gave a keynote lecture at the Schoodic Institute on stewarding our natural and cultural heritage in face of the climate crisis. He also travelled to Katahdin Woods and Waters National Monument to tour the park and the construction site for the new visitor contact station that is being built in partnership with the Elliotsville Foundation.

Throughout his visit to the parks, Sams enjoyed interacting with employees, partners and visitors and hearing their concerns and ideas regarding the protection and enjoyment of these magnificent landscapes.