Home » News » What’s in Bloom at the Wild Gardens of Acadia?

What’s in Bloom at the Wild Gardens of Acadia?

On a misty, gray morning in early spring the rush of falling water off Dorr Mountain echoes in the Wild Gardens and the flute-like song of the hermit thrush and the sound of peepers calling carries from Great Meadow. It is a moment of anticipation. The moment before it all happens: the marsh marigolds opening bright in a dull post-winter landscape, the wood frog eggs hatching in the pond, the purple violets pushing through brown leaves. I feel that if I just sat still enough I
could actually watch the ferns grow. 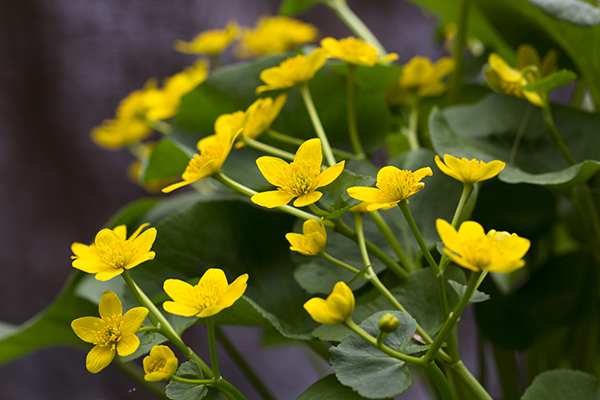 At emergence, fern leaves are tightly coiled to protect the delicate growing tip and tender leaflets folded within. These fiddleheads or croziers, as they are sometimes called, slowly unfurl upward and expand out. The term for this uncurling process is circinate vernation and it is fascinating to watch!

The largest of our native ferns, the interrupted, cinnamon and royal ferns, are all members of the family Osmundaceae (named for Osmunder, the Saxon god of war). Only a week ago these ferns were small nubs atop the crowns of dark root-stalk tussocks. Today some are nearly a foot tall! Both interrupted fern (Osmunda claytoniana) and cinnamon fern (Osmundastrum cinnamomeum) have pale woolly croziers. Those of royal ferns 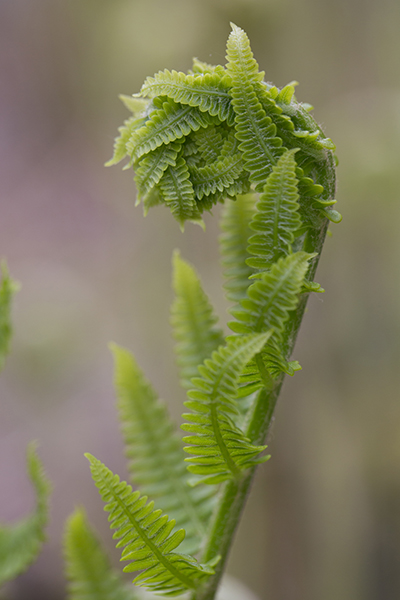 (Osmunda regalis) are fuzzy brown and burgundy. Fully extended, the leaves of all three species may grow to three or four feet. En masse they give the Wild Gardens a lush, primeval appearance.

Interrupted and cinnamon ferns look very similar but can be distinguished by a few key features. Interrupted fern is named such since the center of some of its fronds is interrupted by four or more pairs of dark, spore-producing leaflets. In contrast, cinnamon ferns produce a completely separate fertile stalk in a rich, cinnamon-brown color. Also, cinnamon fern has tufts of brown hairs where each leaflet attaches to the central stalk. Both ferns are found in rich woodlands and wetlands. Royal ferns are found in swamps and along streams and have characteristic separate, wide-spaced leaflets. Their spore-producing leaflets are found clustered at the top of the frond like a crown, hence the name. The fiddleheads of all three species are not edible and are considered carcinogenic.

Edible fiddleheads are in season now and come from the ostrich fern (Matteuccia struthiopteris, family Onocleaceae). Ostrich ferns, whose large graceful fronds resemble ostrich plumes, are not native to Mount Desert Island, but are found in riparian areas elsewhere in Hancock County. 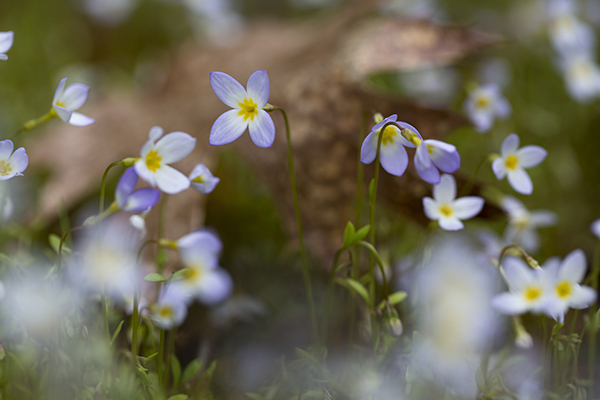