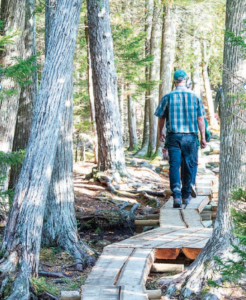 Friends of Acadia President David MacDonald enjoys a stroll along the newly completed bog walk along the west side of Jordan Pond in Acadia National Park.

Chinese philosopher Lao-Tzu famously said a journey of a thousand miles begins with a single step.

It follows then that reconstructing what is believed to be the longest stretch of raised bog walk hiking trail in New England, some 4,500 feet, began with the replacement of a single plank.

That single plank, on the west side of the Jordan Pond Trail in Acadia National Park, went down in late 2016. And now, some four years, 1,500 cedar slabs, thousands of cribwork timbers, and 20,000 lag screws later, the end of the adventure came on September 25.

For the dedicated cadre of volunteers and Friends of Acadia Stewardship Crew staff who have pursued the goal over the past four years, the fact that the project is complete is bittersweet.

“Over the years we’ve really learned better ways to do it,” explains FOA Stewardship Coordinator Dana Petersen. “The credit belongs with the volunteers. They’ve really taken on the field leadership for this. It has been a long journey.” The path around Jordan Pond, just over three miles long, hugs the shoreline for its entire length. On the west side, jumbled boulders, roots, and muddy sections provide little in the way of firm footing. The popularity of the trail also means the bootsteps of hundreds of hikers each day would cause serious damage to the environment on the edges of the pond, which serves as the public water supply for Seal Harbor.

The design requirements are straightforward, but not universal. Each 8-foot section posed its own unique solution to spanning the gap. In places where the terrain dips, the side-by-side planks may be a foot or two in the air. In others, they hug the ground. Additional sets of doubled planks are installed intermittently to permit groups to pass safely.

Each summer and fall since 2016 crews have toiled to remove rotted and weakened sections of the previous bog walk and replace them with four-inch cedar slabs that average eight feet in length. The width varies from 7 to 12 inches. Park officials have to special order the timbers from sawmills in western Maine. When cribwork is required, it is fabricated by using pressure-treated landscape logs. “Essentially you are building a big pier out of Lincoln Logs with five-inch lag screws in each corner,” comments Petersen. “It’s like putting together a giant puzzle.”

One unique aspect of the project is the ability to bring in the heavy supplies, tools, and even workers by boat. In more remote areas materials have to be carried by hand, brought in during winter by snowmobile, or pre-positioned by helicopters.

The park service’s work barge makes multiple runs each day between the latest work site and the boat landing near the Jordan Pond House. Along with bringing materials in, the boat is also used to ferry the removed sections out. Those are loaded onto trucks for later disposal. Several loads will still have to be removed.

The shore along the work area is entirely composed of sharp rocks and steep banks. The result is that the aluminum vessel has its share of dents, scrapes, and dings, Petersen admits. “It’s an understatement to say that boat’s been through a lot,” he says. Supplies have also been staged by dragging them across the ice in winter.

Depending on the available workforce and weather, replacement work has fl ipped back and forth from one end of the section to the other over the years. The fi nal section was located towards the north end of the lake.

“The crews have worked incredibly hard this season. Thanks to all,” says Acadia Trails Chief Gary Stellpfl ug. “They have pushed their usual 9 to 11:30 hours into the aft ernoon. Most of the crew are experienced hands, too.

“Coupling that with having lots of material on site at the beginning of the season, and the crew was able to really move along!”

Petersen is confi dent the quality of the work will stand the test of time. “It should last a good 20 years,” he says. “Then it will be time to start working on it all over again.”

For backcountry trail builders in Maine, stretches that include stout, rough-edged cedar slabs elevated above wet or uneven ground are referred to as bog walk. Several communities in the state have “bog walks” that are actually boardwalks surfaced with pressure-treated planks, often four feet wide and suitable for wheelchair access above marshy areas. One notable example is in Orono.