Life Under the Ice

Home » Life Under the Ice

“Life in the pond is a story of struggles and triumphs: struggle to survive the harsh winter and evade predation long enough to triumphantly breed and reproduce in the spring.” 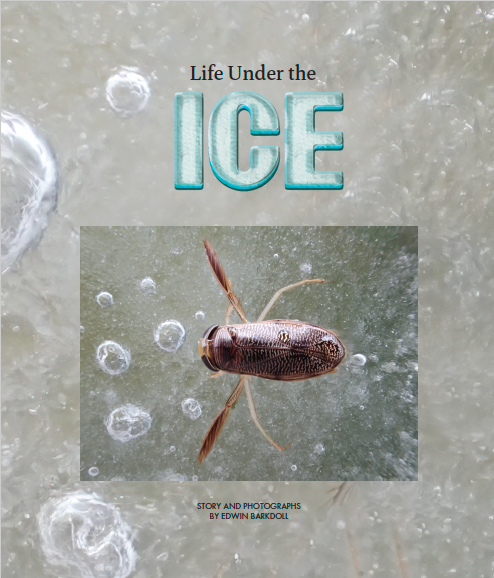 A water boatman, in the family Corixidae, on the ice. (Photo by Edwin Barkdoll)

Winter is my favorite season in Maine. The world is stripped to its barest essentials—nature’s palette is reduced to black, white, and gray; sounds are muted; animals leave traces of their activity in the snow long after they’ve left.

Surely life under the ice of a winter pond would be more austere, or so I had believed since I was a child. Animals just buried themselves in the mud and took the season off.

In 2017, as part of the Maine Master Naturalist Program, I had the opportunity to observe the hidden life under the ice of a wintery Maine pond. The pond was small, spring- fed, with no inlet or outlet, and without ﬁsh. It hosted species characteristic of the vernal pools that dot Acadia, such as wood frogs and spotted salamanders, but lacked the ephemeral nature of vernal pools. 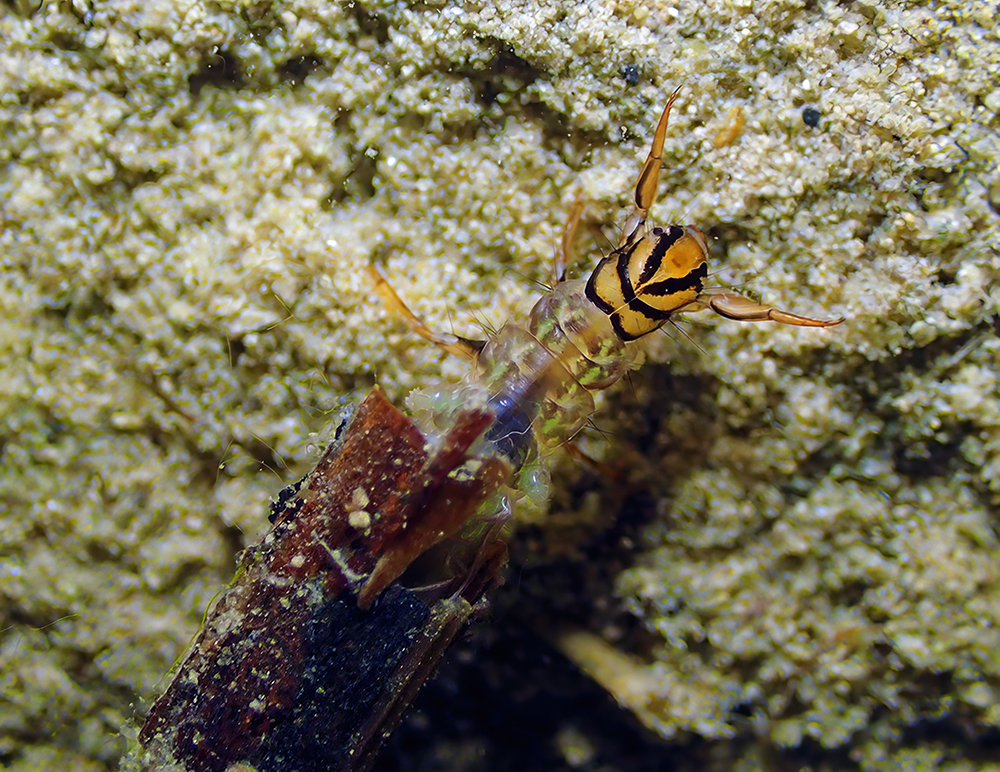 A salamander larva rests on the pond bottom. (Photo by Edwin Barkdoll.) 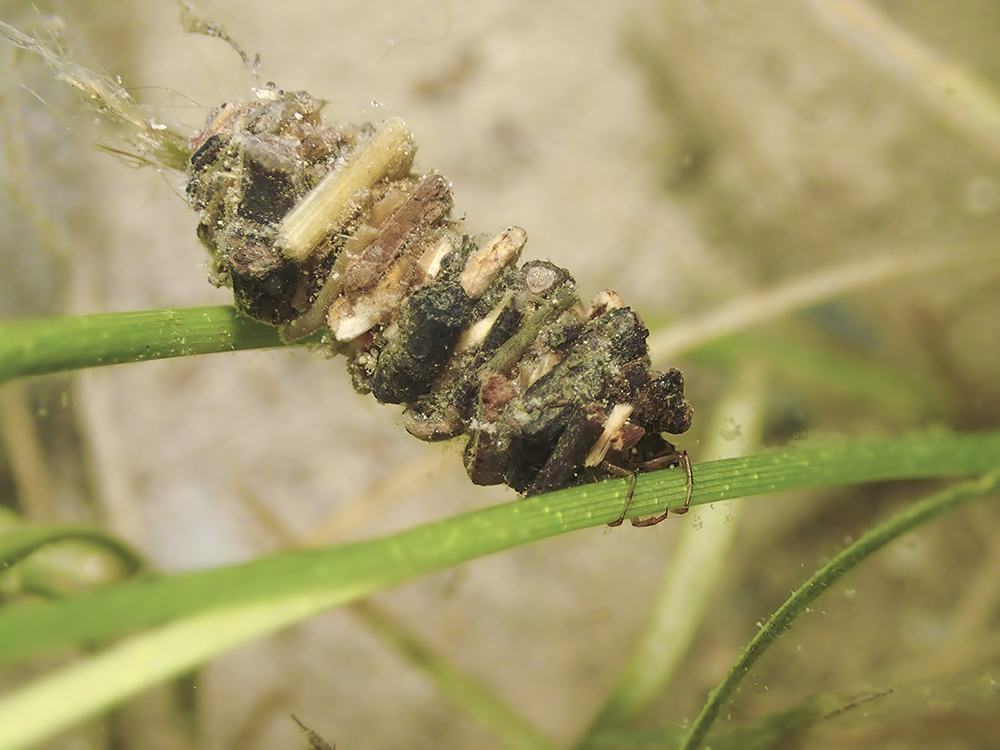 Plants serve as underwater highways for many aquatic insects, such as this Limnephilid caddisfly larva. (Photo by Edwin Barkdoll.) 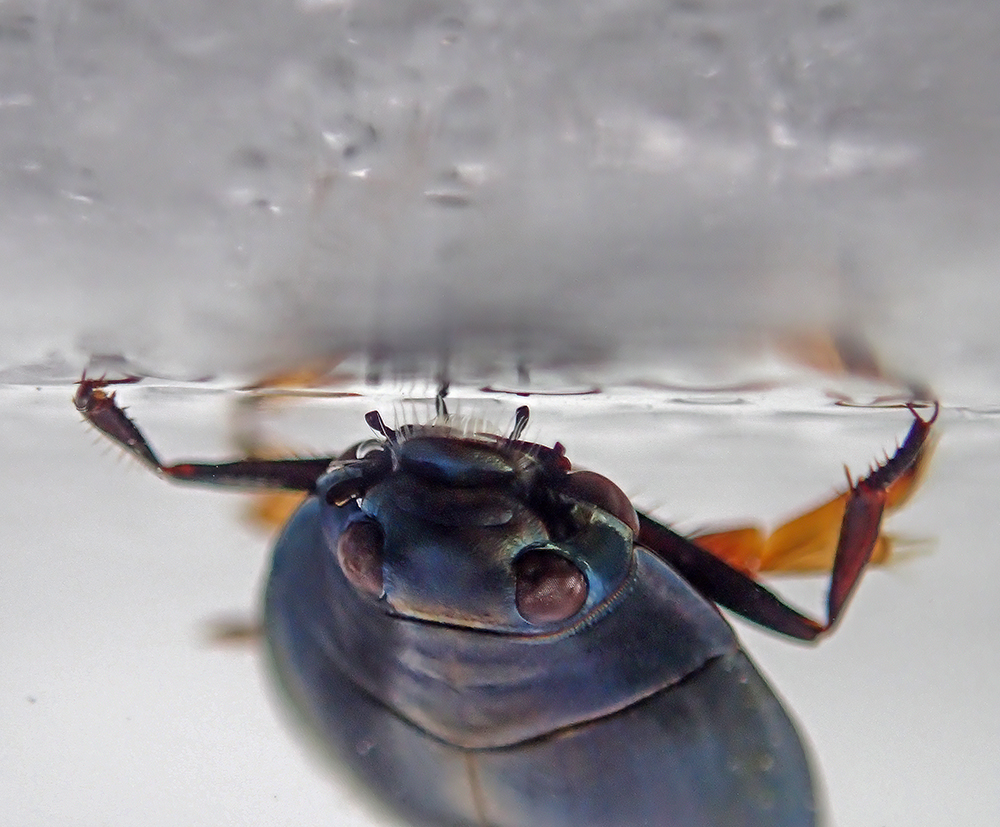 A whirligig beetle (family Gyrinidae) on the ice undersurface shows off its split eyes for looking above and below the water at the same time. (Photo by Edwin Barkdoll.)

In early February, I cut a hole in the pond ice expecting that I might ﬁnd a hibernating amphibian if I searched long enough, and I considered devising an underwater camera to monitor and record long-term activity. Upon submerging my camera, however, it became clear that my preconceived notions would need revision.

Over the next two months, I chopped open the hole several times a week to observe the ebb and ﬂow of life under the ice. I never ceased to marvel at the contrast between the often seemingly lifeless world above the ice and the bustling world beneath it. 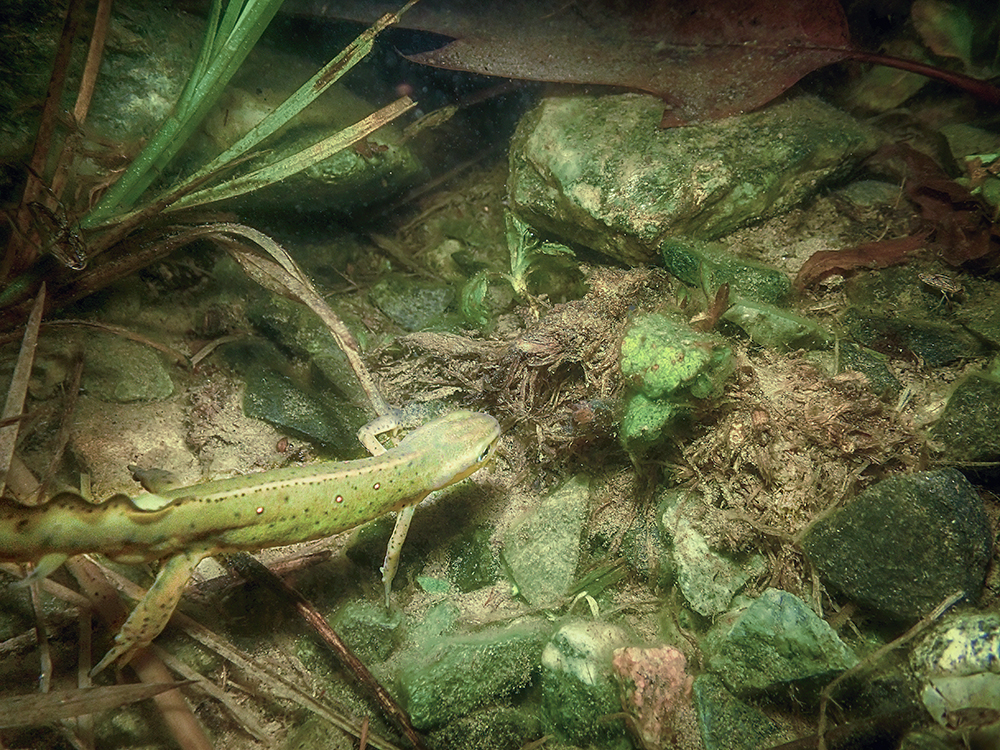 A host of small invertebrates who inhabited the water column were omnipresent, primarily tiny crustaceans, who swarmed with their characteristic jerky movements toward the underwater camera lights at night. Herbivorous water boatmen and predatory backswimmers were common aquatic bugs, swimming, resting on the pond bottom or on aquatic plants, and even crawling on the undersurface of the ice.

“I never ceased to marvel at the contrast between the often seemingly lifeless world above the ice and the bustling world beneath it.” 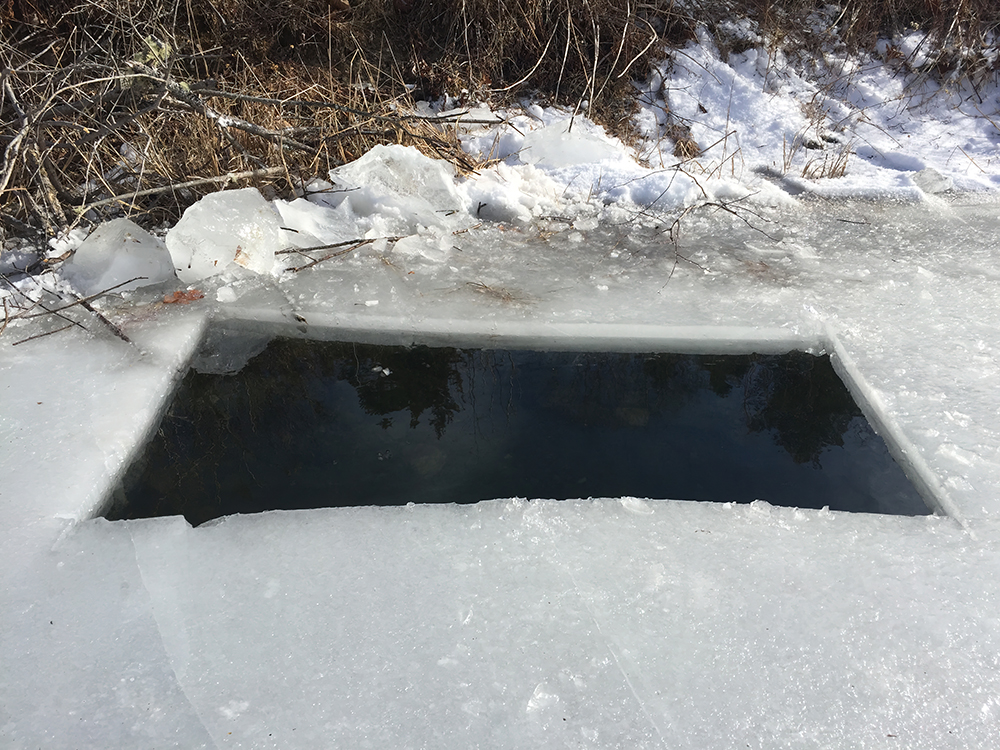 Window in the eight-inch-thick ice. (Photo by Edwin Barkdoll) 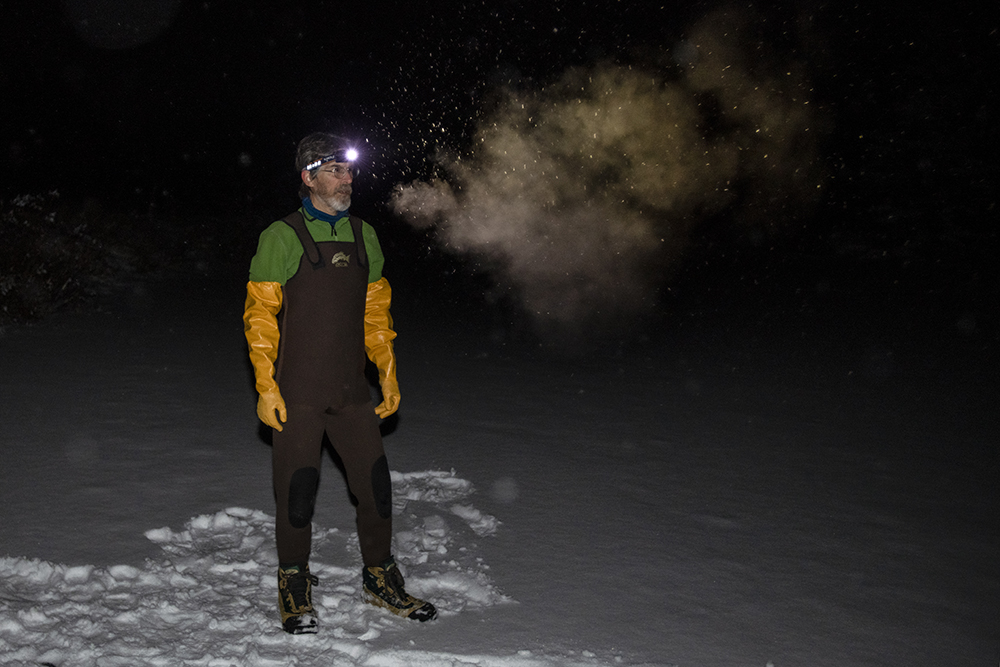 Edwin displaying how to keep warm while photographing under the ice. (Photo by Edwin Barkdoll)

The insect architects, case-making caddisﬂy larvae, moved purposefully, consuming detritus and the occasional prey. They fashioned their homes as long, spiraling cylinders or bushy broom-shaped cases from plant material, metamorphosing into moth-like adults in the spring.

From the ﬁrst day of the project, I was struck by the presence of amphibians under the ice. Larval salamanders were most numerous, followed by tadpoles. Occasionally, an adult eastern newt swam gracefully by. The larval salamanders occupied a soft spot in my heart, but after observing their predatory behavior as they snapped up tiny crustaceans, I developed a healthy respect for them as well, and, beﬁtting their nature, the feathery gills behind their heads gave them leonine manes. 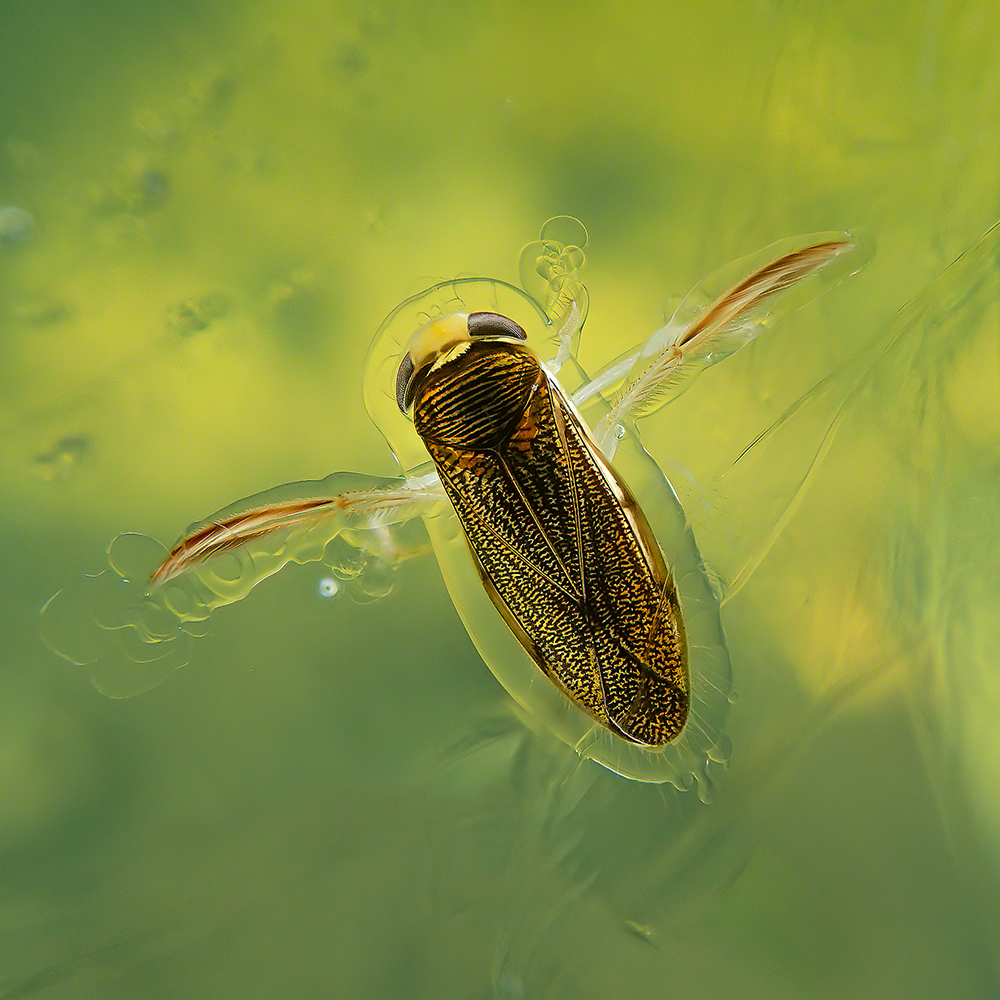 Despite being trapped in the ice, some water boatmen species
can survive freezing. (Photo by Edwin Barkdoll) 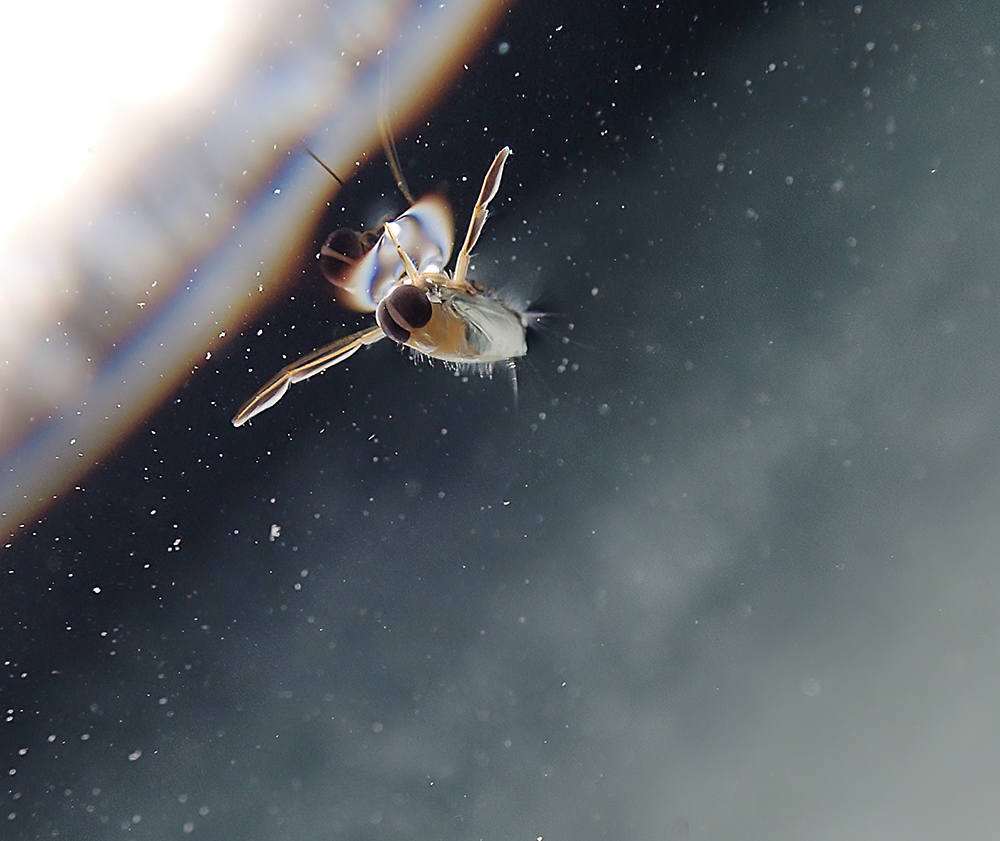 A backswimmer (family Notonectidae) fl oats at the water surface under the ice. (Photo by Edwin Barkdoll)

Early April marked a turning point. Adult amphibians began appearing in large numbers as they migrated from their winter hibernacula in the woods to breed, and I fell through the thinning ice.

Compared to the subdued sounds of winter, ice breakup coincided with the beginning of a nightly cacophony of frog choruses and a surge in activity around the pond. Salamanders and frogs choreographed their breeding rituals in a coordinated manner focusing on the task at hand, and within days spotted salamander and wood frog egg masses appeared in the pond shallows. The presence of the eggs signiﬁed the beginning of another pond lifecycle but was also a bountiful food source for many of the pond inhabitants, and I often saw caddisﬂy larvae feasting on egg masses.

Life in the pond is a story of struggles and triumphs: struggle to survive the harsh winter and evade predation long enough to triumphantly breed and reproduce in the spring. Witnessing these events unfold opened a window, a hole in the ice of my preconceptions if you will, for me to gain an intimate appreciation of this cycle.

EDWIN BARKDOLL has had a long-time love affair with the natural world—from the molecular as a biochemist, to the big and furry, as a veterinarian. He is a Maine Master Naturalist and nature photographer who enjoys prowling wherever an untrodden trail beckons.