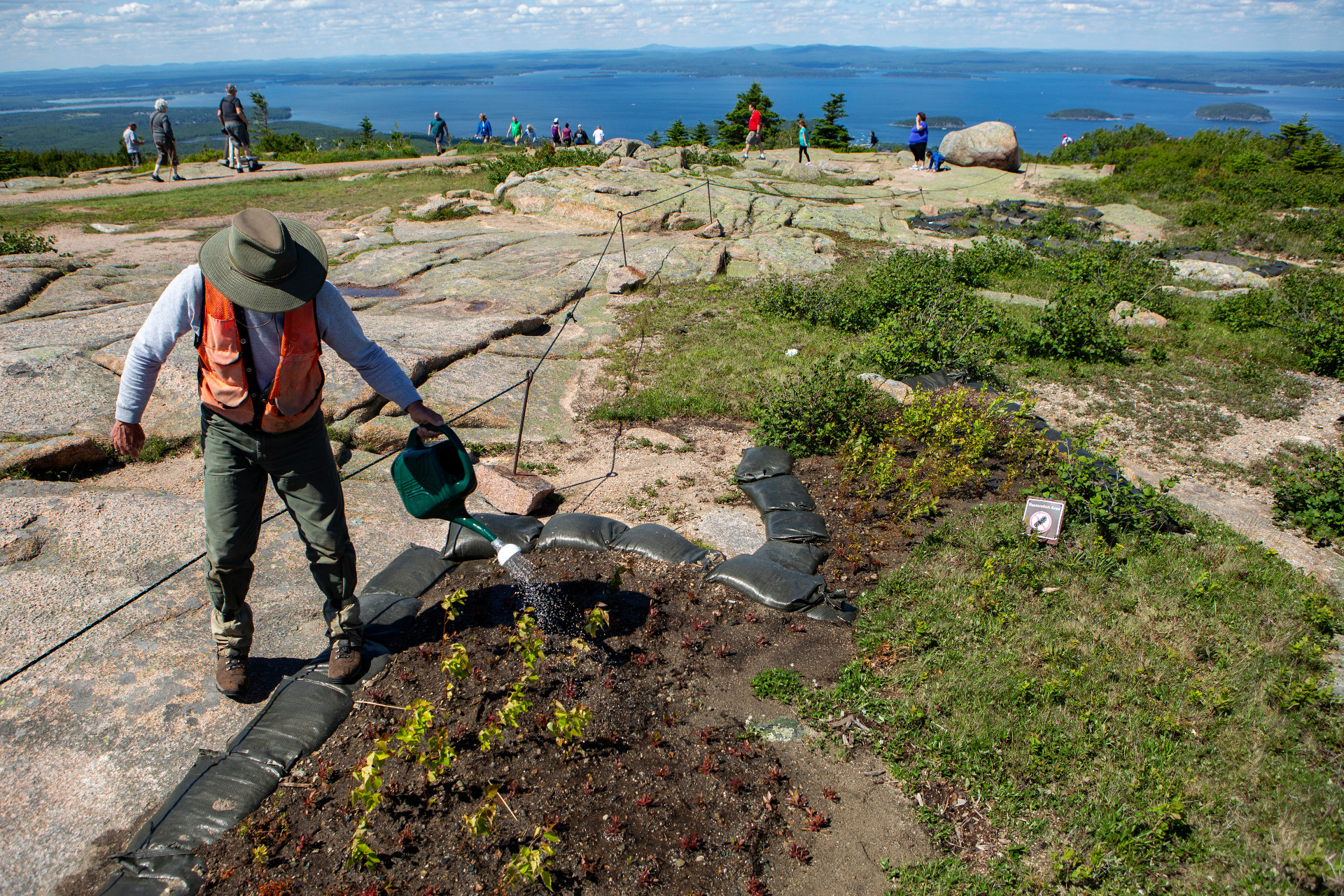 Every bit of damage leaves remaining plants, mosses, and lichens – part of the unique sub-alpine community – more exposed and vulnerable to the intensifying rainstorms, freeze-­thaw cycles, and prolonged periods of hot, dry weather on the mountaintop.

Park managers have been evaluating different ways to bring plants back to the mountain, in partnership with Friends of Acadia, Native Plant Trust, and Schoodic Institute. Beginning in 2016, Bill Brumback and Jill Weber of Native Plant Trust led a series of experiments on the Cadillac summit. Over the next five years, the partners set up 79 plots, outlined with rope and sandbags, in eroded areas of the summit. Each received a different combination of soil, erosion fabric, seeds (collected from Cadillac plants), and/or seedlings (grown from the collected seeds). Other plots received no treatment to serve as control groups for the study.

Measurements of plant growth and survival revealed mixed success, but a main conclusion is that “soil helps,” said Weber, who reported on the results with Brumback in March. Growth was better in the plots with deep layers of compost or loam-even in plots without any seeds or plants, as seeds from neighboring areas arrived on their own. Of the species planted, three-toothed cinquefoil and green alder were the most successful.
Planting nursery-grown seedlings (as opposed to seeds) was the most time and energy-intensive treatment and only resulted in high plant cover in some plots. 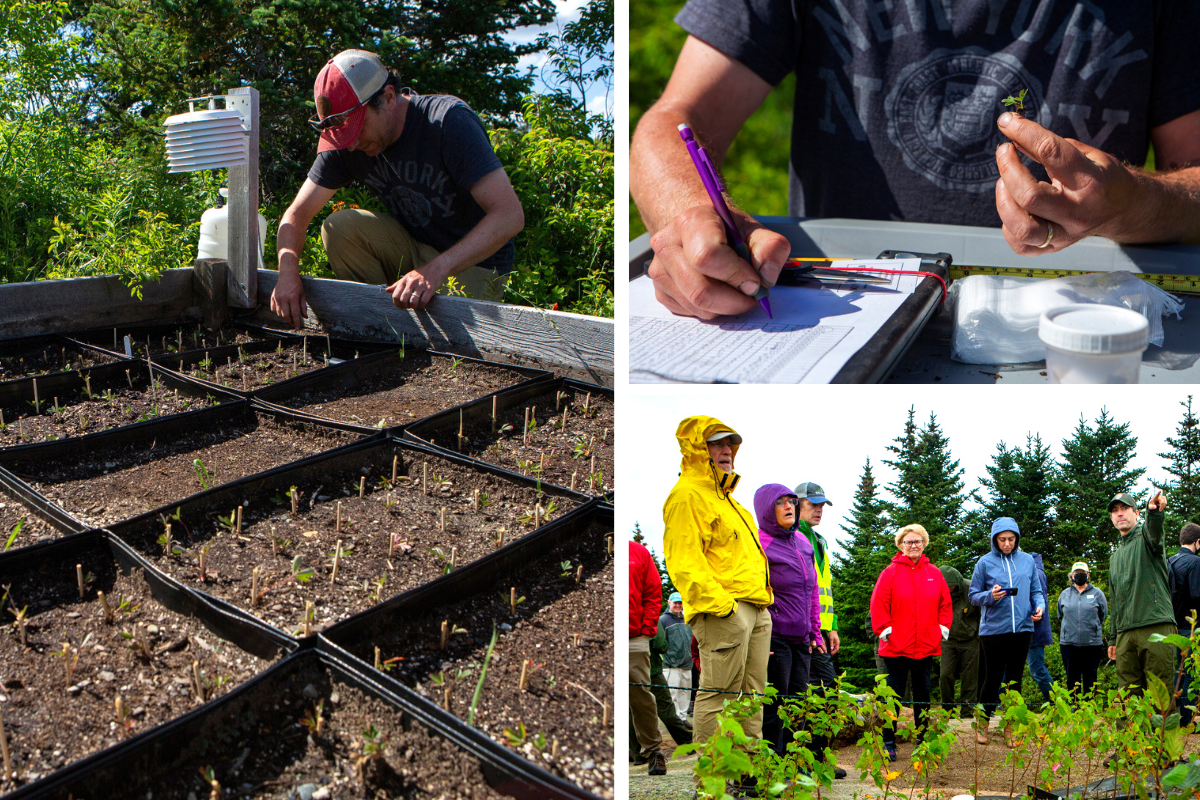 This method also isn’t feasible on other summits where managers plan to extend restoration efforts. Erosion is occurring at other sub-alpine locations, such as South Bubble, Penobscot, and Sargent Mountains, which don’t have the road access and water supply of Cadillac Mountain. These less-accessible summits and ridges will require a fine-tuned restoration approach using methods proven effective for Cadillac, but also that will work for each unique site.

It is also too early to draw any conclusions, said Brumback. “Continued monitoring is essential.”

Acadia National Park biologist Jesse Wheeler agrees. “There are still so many questions, including what does successful restoration look like in 20 years, and what do we need to know?” Wheeler said that answering these questions will require inviting more voices into restoration decisions.

To that end, Chris Nadeau of Northeastern University, who is researching the tolerance of mountain plants to future climate conditions in Acadia, is facilitating a series of meetings to help the park identify summit restoration goals and adaptive management approaches. These workshops will include a diverse Science Advisory Committee, coordinated by Nelson, to better incorporate diverse expertise and user groups. For example, the Science Advisory Committee will include Scott Abella of University of Nevada Las Vegas. Abella is the restoration expert with both hands-on and theoretical experience in restoration, including with desert soil crusts, which are not unlike the moss and lichen that are the first to become established on bare rock and gravel and help build soil on Acadia’s granite peaks. 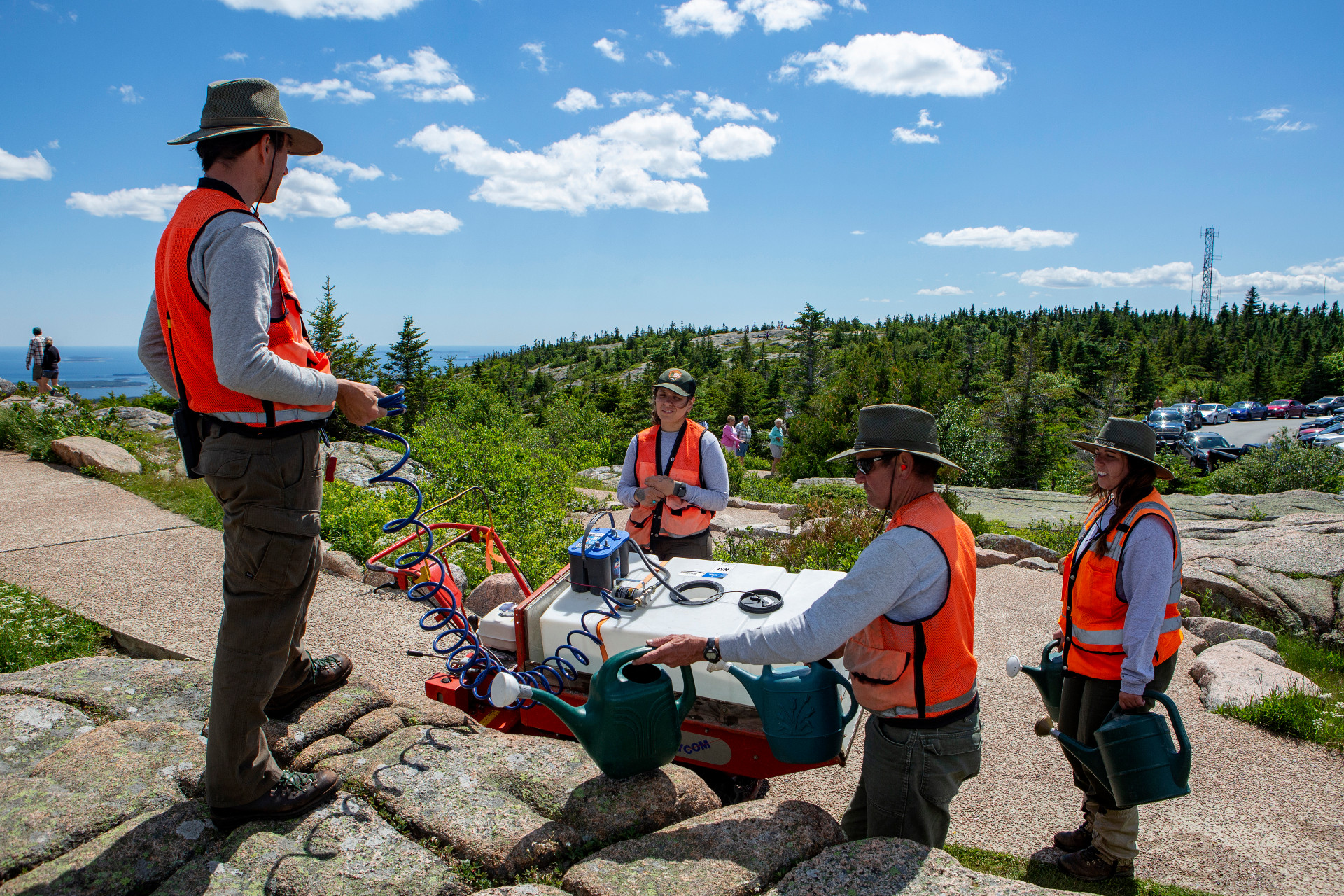 “Our monitoring of the experimental plots on Cadillac documented new growth of soil-forming mosses and lichens,” said Nelson. “We want the restoration to follow nature’s lead and mimic these processes,” said Nelson, who has studied lichens in Maine, the Arctic tundra, and other boreal and alpine ecosystems.

This summer, Nelson and Wheeler plan to test the application of a slurry made from Cadillac moss and lichen samples on additional small plots on Cadillac. “We aim to use crust organisms to stabilize gravel beds or partially eroded patchy vegetation, in combination with methods from the first phase of the project, such as the use of mesh netting to hold soil in place and potentially selective planting and soil amendment,” said Nelson.

They will also continue to monitor the previously planted areas and survey other summits to learn more about natural processes of soil and plant regeneration. The hope is that with more voices, more information, and more preparation, they can be more successful in protecting Acadia’s unique and wild mountain summits.

CATHERINE SCHMITT is the Science Communications Specialist at Schoodic Institute.