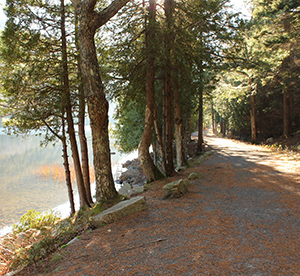 A generation ago, the park faced a seemingly insurmountable backlog of maintenance on the roads and some wondered whether they should be allowed to grow in as simple walking trails. When the carriage roads were gifted to Acadia National Park by the family of John D. Rockefeller upon his death in 1960, the park lacked the resources to add staff to perform annual upkeep. Instead of Rockefeller’s seasonal maintenance staff of 40, the system now shared the attention of the park’s small road crew. Without annual upkeep, leaves and woody growth choked the drainage system and erosion led coping stones to tumble out of place. As the upper layers of gravel were lost and vegetation grew on the road surface, erosion accelerated. How You Can Help
Join Friends of Acadia and Acadia National Park each fall on the first Saturday in November, for Take Pride in Acadia Day—a giant volunteer work party to clear fallen leaves and debris from the carriage road drainways before winter. This single morning of volunteer effort protects the road surfaces from erosion and other seasonal damage, potentially saving the park thousands of dollars in repair costs each year.

Take Pride in Acadia Day from Friends of Acadia on Vimeo.