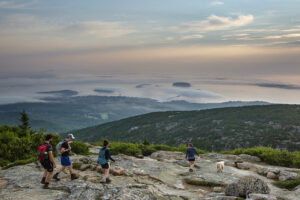 The headline in the Bangor Daily News yesterday (4/20/22) read: “American Aquafarms’ controversial salmon pen proposal is killed.” The news article, which was posted online later in the day, announced that the Maine State Department of Marine Resources (DMR) terminated American Aquafarms’ lease application for two 60-acre salmon pens because the company failed to select a proper source for its fish eggs.

The company can still submit an entirely new application, but a restart would likely tack on several years to the permitting process.

American Aquafarms needs a total of three permits to move forward, in addition to the DMR, permits are required from Maine Department of Environmental Protection, and the U.S. Army Corps of Engineers.

Friends of Acadia joined the fight early to defend Acadia against the industrial-scale aquaculture proposal to lease two 60-acre sites near Bald Rock and Porcupine Island in Frenchman Bay. Friends of Acadia stands with the National Park Service, Frenchman Bay United, area fisherman, local municipalities and businesses, and other stakeholders urging state and federal regulators to stop the proposal. So, this was an early victory in what could be a long and arduous process.

“The decision by the Maine Department of Marine Resources to terminate the permit for American Aquafarms’ massive salmon farm in Frenchman Bay, was a small victory and we are delighted by the news,” said Stephanie Clement, Interim President and Conservation Director at Friends of Acadia. “This is a serious setback for American Aquafarms, but it is likely not the end of the proposal. There is still a lot of work to do.”

Today, in response to the DMR’s action, the Maine Department of Environmental Protection returned American Aquafarms’ application for a waste discharge license. So, the application is basically dead in both Maine state departments, for now.

Frenchman Bay United—a coalition of groups and individuals from the bay and across the state opposed to industrial size aquaculture in Frenchman Bay—released a public statement today urging American Aquafarms to pull the plug on the project.

“It has been clear from the start that this project will create massive water and air pollution and will hurt the local economy through its adverse impacts on the lobster fishery, small-scale aquaculture operations already in the bay, and the many tourism and recreation jobs. All of these depend on a clean, unspoiled bay,” said Frenchman Bay United Treasurer Jeri Bowers, who is also president of Friends of Eastern Bay.

You can read the full statement from Frenchman Bay United here.

The Friends of Acadia Advocacy Committee will continue to monitor developments and discuss strategies for defending Acadia against industrial size aquaculture.

Stay tuned to Friends of Acadia E-News and the advocacy page on our website to learn more about recent developments and what you can do to help ensure our bay and its ecosystem are protected from this industrial threat.