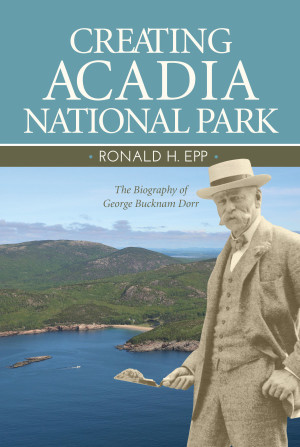 Mount Desert Islander – 3/31/16: “Readers will come to know Dorr the man, not only his triumphs and generosity, but also his frailties, his blind spots and ultimately, his humanity…. The storyline flows so well and the cast of supporting characters is so well explained, producing a singularly easy-to-read book with its accessible presentation and an unimperious style.”

Dan Zukowski (Lecture given 4/22/16 at L.L.Bean): “Epp’s academic background clearly shows through in his research for this book. It is well documented and filled with the context and details of George Dorr’s life that help us connect with him.”

Kennebec Journal – 6/2/16: “this biography is a fitting tribute to both the man and a natural treasure…a richly detailed history of Dorr, Acadia and the National Park Service”

Also see this article in the September/October 2016 issue of Harvard Magazine: http://harvardmagazine.com/2016/09/george-bucknam-dorr

The first biography of George B. Dorr ever written, Creating Acadia National Park: the Biography of George Bucknam Dorr is based on painstaking research both in the US and abroad, including federal, state, and private archives. Newly-discovered and uncatalogued sources are supplemented by in-person interviews. This work will appeal to general and scholarly readers who care about the philanthropic roots of land conservation, those interested in what has been celebrated as “America’s Best Idea,” and above all, those who know and love Acadia National Park. RONALD H. EPP, Ph.D. is a historian and professor of philosophy with a background in scholarly publishing and academic library leadership. His research over the last two decades into the Massachusetts families that influenced the development of conservation philanthropy has resulted in numerous talks and publications for Acadia National Park, Hancock County Trustees of Public Reservations, Mount Desert Island Historical Society, and many other organizations. He served as a consultant for the Ken Burns documentary America’s Best Idea: the National Parks and has uncovered and inventoried hidden collections of documents relating to the history of Acadia National Park.

“George B. Dorr has always been more myth than man. He is seen off in the distance striding purposefully along a trail, or standing, pensively, atop a mountain ridge looking to the distant horizon. Known locally as the father of Acadia, George Dorr was largely unknown nationally until now. With this biography, Dr. Ronald Epp eloquently brings George Dorr’s life and accomplishments onto a national stage. Weaving threads of the cultural, intellectual and historical milieu in which Dorr lived, Epp’s writing is both scholarly and engaging.
“From Dorr’s background as a member of an important family of proper Bostonians, Epp traces the tapestry of events and individuals who shaped Dorr’s thinking and work, culminating in the creation of a national park. We are constantly reminded of George Dorr’s accomplishments with every walk or hike through Acadia; we marvel at him even more when turning every page of Epp’s well researched and fascinating account.”
—Rebecca Cole-Will, Acadia National Park Chief of Resource Management

“We are very fortunate to have Ronald Epp’s timely work at the 100th anniversary of the park and the National Park Service. Epp’s extensive research provides new insights into the life of George B. Dorr, which Epp carefully weaves into the remarkable story of the founding of Acadia National Park. Epp documents Dorr’s abilities to collaborate, his persistence, indefatigable spirit, and belief in preservation for future generations. Readers will be inspired to reflect on how the dedication of one person can influence the enjoyment and enrichment of millions.”
—Margaret Coffin Brown, Historical Landscape Architect at the NPS Olmsted Center for Landscape Preservation and author of Pathmakers: Cultural Landscape Report for the Historic Hiking Trail System of Mount Desert Island.

“A wonderful gift for all who love Acadia, bringing to life the man who, more than any other, was responsible for the park’s creation and early growth. We also learn about the many others, unknown today, whose support and expertise were indispensable, and how the creation of Acadia fits into the story of our other national parks. Based on wide-ranging research, Epp describes Dorr’s upbringing, education, wide-ranging family and social connections, and preservation philosophy, all of which played a crucial role in the Acadia story. Even those who know Acadia well will learn much from this valuable book.”
—William C. Clendaniel, a six-decade visitor to Acadia and formerly Deputy Director of The Trustees of Reservations in Massachusetts, President & CEO of Mount Auburn Cemetery, and board chair of the Massachusetts Historical Society

“Here is the untold story of the making of Acadia National Park and the critical role of George B. Dorr, a passionate lover of the natural world and, in particular, Mount Desert Island in Maine. This book reveals the fascinating story of Dorr’s collaboration with Harvard College president Charles W. Eliot and philanthropist John D. Rockefeller Jr., to make Acadia the first national park on the East Coast in 1916. Dorr’s elite upbringing, independent spirit, and dedication to preservation make fascinating reading.”
—Judith B. Tankard, Landscape Historian and author of Beatrix Farrand: Private Gardens, Public Landscapes

Although he is known as the “Father of Acadia” and a founder of the oldest national park east of the Mississippi River, George Bucknam Dorr’s seminal contributions to the American environmental movement have gone largely unacknowledged. Even today, those who live in or visit the coastal Maine communities surrounding Acadia National Park do not fully realize the scope of his achievements. This biography is the story of Dorr’s pioneering role in the establishment and development of a unique conservation model that dovetailed with the evolution of the US National Park Service—which shares its 2016 centennial with Acadia.Raised in Boston as a member of New England’s elite merchant class, Dorr adopted Maine’s Mount Desert Island as his home and the setting to apply the practical lessons of “Boston Brahmin” philanthropy that tracked back to his maternal grandfather, banker and Harvard College Treasurer Thomas Wren Ward. Yet through his finest work—the creation and management of Acadia National Park—and through his collaborations with park co-founders Charles W. Eliot, John D. Rockefeller Jr., and others—Dorr transformed an elitist social inheritance into an all-consuming commitment to conservation. One hundred years after its founding, this national treasure is visited, enjoyed, and beloved by millions every year. The first biography of George B. Dorr ever written, Creating Acadia National Park: the Biography of George Bucknam Dorr is based on painstaking research both in the US and abroad, including federal, state, and private archives. Newly-discovered and uncatalogued sources are supplemented by in-person interviews. This work will appeal to general and scholarly readers who care about the philanthropic roots of land conservation, those interested in what has been celebrated as “America’s Best Idea,” and above all, those who know and love Acadia National Park.