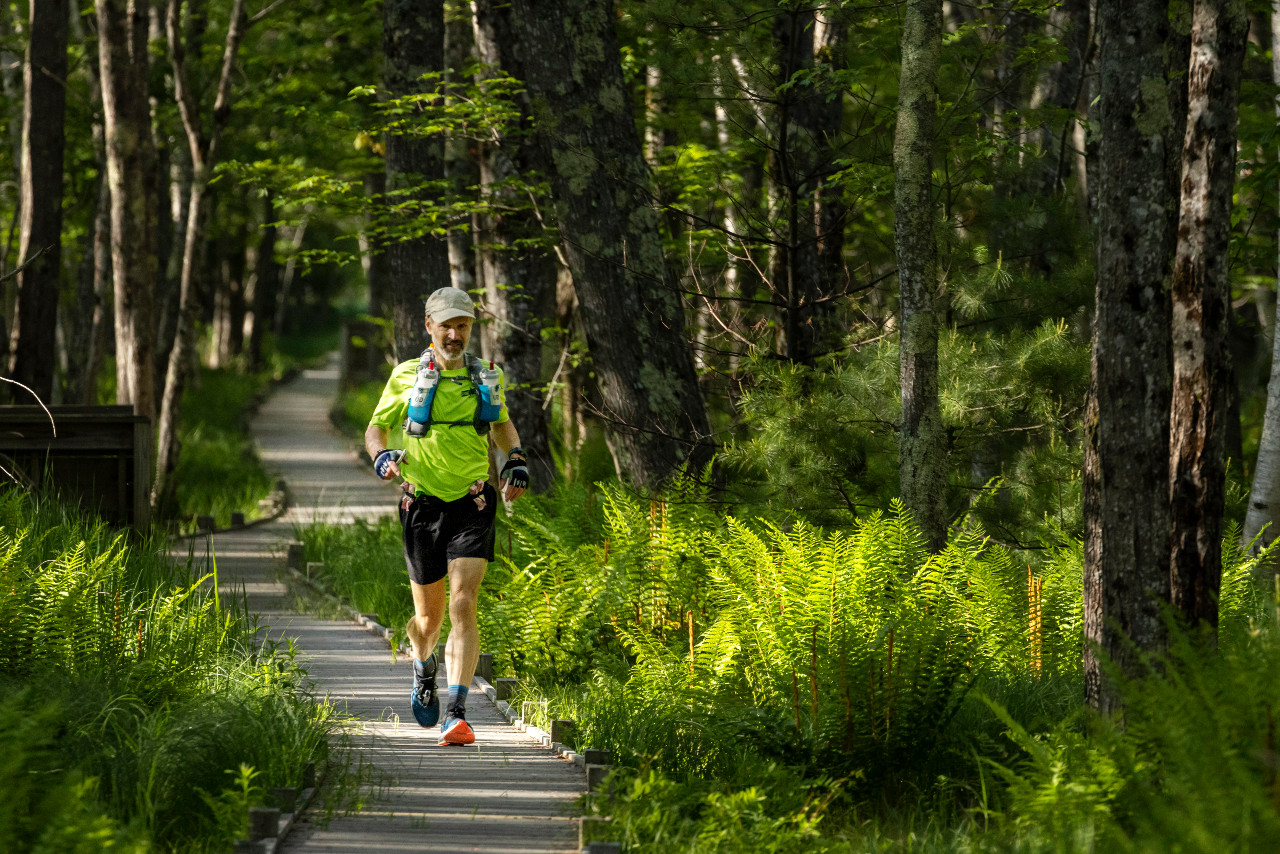 Pat Sandefur, of Burlington, Conn., runs along the Jesup Path in Acadia National Park as part of a 50k solo fundraising run. (Photo by Ashley L. Conti/Friends of Acadia)

“Climate change is something I have been concerned about for a long time, and I worry about its impact on Acadia National Park,” said Pat Sandefur. The Friends of Acadia member and Burlington, Conn. native decided he needed to do something about it.

“My 50K ultra run through the park was a way to raise money for the Wild Acadia project by doing something I love to bring attention to the impact of climate change on the park,” he said.

Sandefur has been visiting Acadia since he was six years old (and has the pictures to prove it, he jokes); his wife has joined him for the last 33 years, and his kids have been visiting Acadia their entire lives. His appreciation for the park’s unique landscapes and coastal vistas runs deep – he even named his business, Bass Harbor Group, in honor of the iconic Bass Harbor Head Light Station, which marks the entrance to Bass Harbor and Blue Hill Bay on the southwest corner of Mount Desert Island.

Sandefur is also an avid ultra runner, the sort who’ll wake up before dawn at a Mount Desert Island campground to pack in 31 miles on the park’s carriage roads and trails before the warm midday air settles in. It makes sense he’d choose to do a 50K in Acadia National Park to raise funds and awareness for a place so close to his heart.

“My family and I have experienced decades of joy visiting this place,” he said. “So I committed myself and Bass Harbor Group to being socially responsible by helping Friends of Acadia preserve and protect Acadia for future generations, specifically through the Wild Acadia project.” 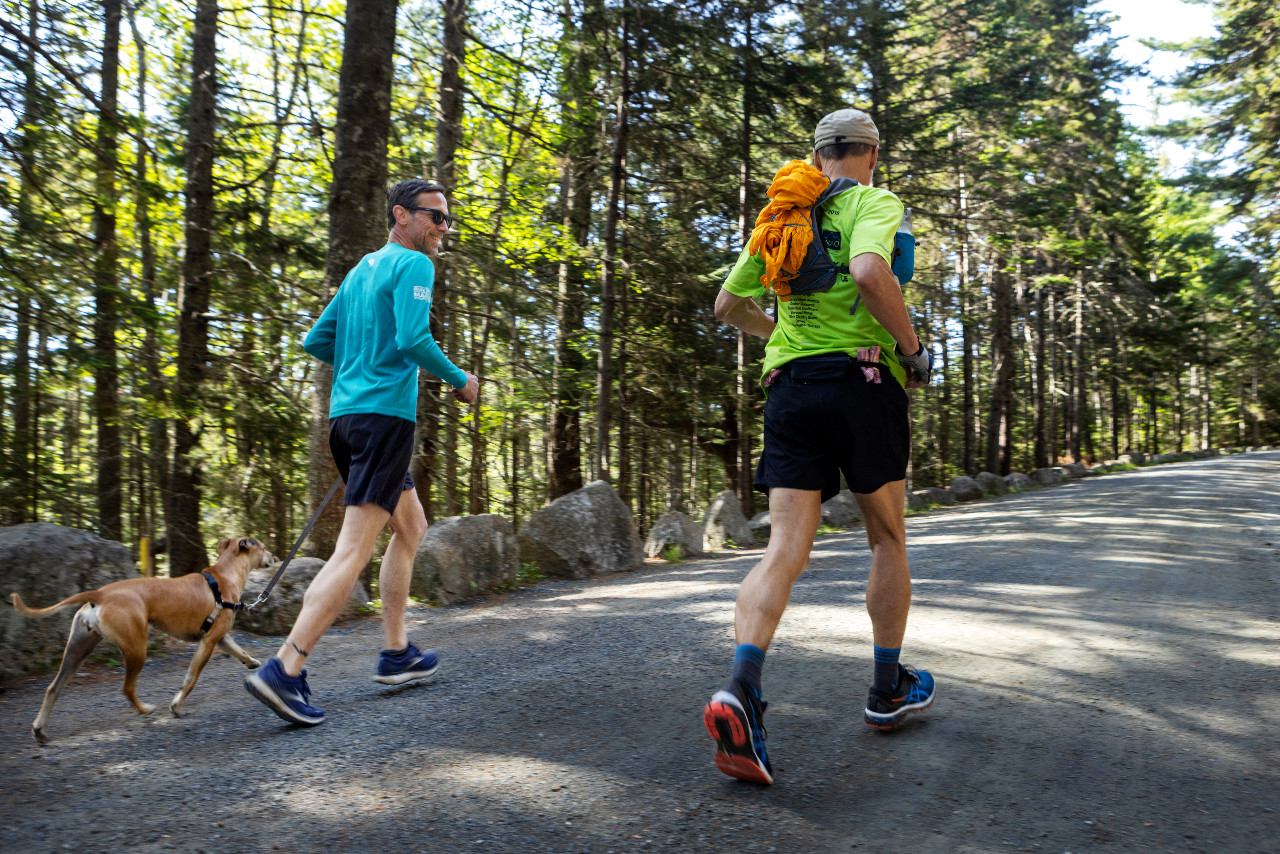 Pat Sandefur, of Burlington, Conn., runs with Brian Henkel, Friends of Acadia Wild Acadia Project Coordinator, along the carriage road near Eagle Lake in Acadia National Park, Wednesday, June 7, 2022 as part of a 50k solo fundraising run. Sandefur ran the 31.1 miles ultramarathon around the eastern half of the park to raise funds for Wild Acadia, which is helping the park explore ways to manage ecosystems so that it is better equipped to handle changing environmental conditions. (Photo by Ashley L. Conti/Friends of Acadia)

On June 7, Sandefur awoke in his tent before daybreak to begin his run from Blackwoods Campground. He ran by notable park locations, like Thunder Hole, Eagle Lake, Sand Beach, and Jordan Pond House, sometimes stopping to shoot a quick video about the location and the specific impacts climate change is having there.

“With climate change, as storms intensify, the waves increase,” he says at Sand Beach in the YouTube video he posted of his run. “It’s already having an impact on this beach. Sometime in the future, it won’t look the same.”

At Thunder Hole, one of his favorite places in the park, Sandefur talks about rising sea levels, which will eventually fill up the naturally formed inlet, submerging Thunder Hole entirely. At Great Meadow, he notes how increased rainfall in recent years is exacerbating flooding.

Wild Acadia Project Coordinator Brian Henkel joined Sandefur at Eagle Lake and ran 13 miles alongside him, even making an appearance in the YouTube video to talk more about the work happening at Great Meadow. “It was a pleasure to run with Brian,” Sandefur said.

“I’m so happy to have been doing this,” he said in the YouTube video he posted following his 50K. “I made a lot of nice friends along the way, and I’m doing it all for Friends of Acadia and the Wild Acadia project.”

Thank you to Pat for his love for Acadia and dedication to sharing it with generations to come.