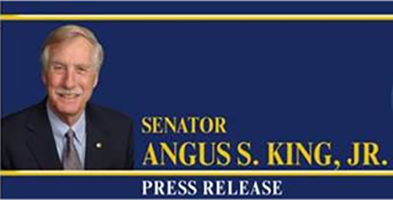 WASHINGTON, D.C. – Today, June 17, the U.S Senate passed the Great American Outdoors Act (GAOA), bipartisan legislation championed by U.S. Senator Angus King (I-Maine) that will support national parks and public lands across our nation. The GAOA includes the Restore Our Parks Act, legislation introduced by Senators King to address the existing $12 billion maintenance backlog in our national parks – including an estimated $65 million in needed repairs at Acadia National Park. In addition, the GAOA includes the Land and Water Conservation Fund (LWCF) Permanent Funding Act, legislation cosponsored by Senator King that would make $900 million available each year for the LWCF without being subject to federal appropriations. The legislative package would be among the most impactful conservation laws enacted in the last century. The bill passed the Senate by a vote of 73 to 25, and now heads to the House of Representatives for consideration.

“America’s natural beauty has been passed down from generation to generation, creating an untold number of lifelong memories. Now, it’s our turn to protect these lands for our children, and their children,” said Senator King, the Ranking Member of the Senate National Parks Subcommittee. “Unfortunately, we’ve fallen short on this responsibility for too long, leaving the National Park Service with a $12 billion backlog of maintenance projects in national parks from Acadia to Zion, and regularly allowing funding for the widely popular LWCF to get caught up in unrelated political squabbles. That changes today.

“The Great American Outdoors Act is monumental legislation that will preserve these lands for future Americans,”Senator King continued. “The overwhelmingly bipartisan vote showed just how much this issue transcends politics – because a sunrise from Cadillac Mountain inspires the same awe in everyone, no matter how you vote in November. These lands are a great unifier – a distinctly American legacy, that we inherited from those that came before us. Today’s passage extends that legacy onward, and ensures that millions of people are able to connect with the wonders that surround us for years to come.”

As a lifelong advocate for conservation and Ranking Member of the Energy and Natural Resources Subcommittee on National Parks, Senator King is among the Senate’s loudest voices advocating for conservation. He first introduced the Restore Our Parks Act in July 2018 with Senators Lamar Alexander (R-Tenn.), Rob Portman (R-Ohio), and Mark Warner (D-Va.). The bipartisan legislation will establish the “National Park Service Legacy Restoration Fund” to reduce the maintenance backlog by allocating existing revenues the government collects from on and offshore energydevelopment. Last week, Senator King spoke on the floor of the Senate, urging passage of the GAOA as “a gift for our fellow Americans.” Senator King has also highlighted the economic benefit of investing in public lands. One recent study by the National Parks Service (NPS) showed that Restore Our Parks Act will support an average of 40,300 direct jobs and 100,100 direct and indirect jobs over the next five years, while another study shows that national parks generated more than $41 billion in economic activity in 2019. Senator King’s work on this legislation is the culmination of nearly 40 years of work on land conservation efforts in Maine, including helping to establish the Land for Maine’s Future program in 1987 and supporting extensive conservation projects during his time as Governor.

In addition, the legislation will provide permanent and full funding – $900 million annually – for the LWCF without being subject to federal appropriations. This builds on the John D. Dingell, Jr. Conservation, Management, and Recreation Act, which permanently authorizes the LWCF and was signed into law last year with Senator King’s strong support.

The passage of the Great American Outdoors Act has been met with widespread support by conservation organizations and advocates, including:

Ken Burns and Dayton Duncan, producers of The National Parks: America’s Best Idea: “Our public lands––owned by every American––are national treasures, which John Muir called ‘places to play in and pray in, where nature may heal and give strength to body and soul alike.’ Protecting them for future generations is a sacred obligation, and maintaining them with good roads and better trails and improved visitor facilities is a vital part of fulfilling that responsibility. This bill is an important––and much overdue––step in preserving ‘America’s best idea.'”

Will Shafroth, President & CEO of the National Park Foundation: “Senate passage of the Great American Outdoors Act (GAOA) is a remarkable achievement in advancing historic bipartisan legislation for our national parks. The National Park Foundation commends Senator King for his unwavering support of Maine’s iconic national parks, and to preserving our national treasures through his leadership as Ranking Member of the Senate Energy & Natural Resources’ Subcommittee on National Parks. GAOA will ensure that national parks receive the funding required to address deferred maintenance needs, that parks remain accessible to all Americans, and continue to serve as economic engines for local communities in Maine and across the country.”

David MacDonald, President & CEO of Friends of Acadia: “Acadia and all who enjoy it will benefit greatly from this historic legislation. Passage of the Great American Outdoors Act in the Senate is a major step toward preserving and protecting the places that mean so much to us as a nation. We are grateful to Senator King for his leadership in helping to draft the legislation and marshaling such broad and bipartisan support among his colleagues. The Act would dramatically boost funding available for maintenance of existing assets in parks, such as trails, roads, bridges and water systems; as well as ensuring support for the Land & Water Conservation Fund, which has been essential to land protection efforts at Acadia and in communities throughout Maine.”