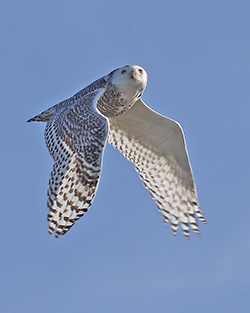 By Catherine Schmitt
from the Winter 2012 Friends of Acadia Journal

Editor’s Note, January 2014: This winter a record number of snowy owls are being spotted in the Northeast US, in what has been called “one of the most dramatic natural history spectacles in the northeast” (by the Cornell Lab of Ornithology). Many “snowy” sightings have been reported in Acadia; the bare summits of the park’s granite mountains may feel similar to their arctic tundra home. This article appeared in the Friends of Acadia Journal one year ago; the author’s quest might have been an easier one this winter!

Winter in Acadia: bare limbs of beech and birch cast long shadows on the snow. Evergreens shimmer along shallow coves that sing with the ebb and flow of icy tides. Frozen summits shine like mirrors in the thin sunlight. It is the favorite season of many residents. Anglers drop lines through the ice on Eagle Lake, and friends take an afternoon ski along Upper Hadlock Pond. There are visitors who prefer winter, too; the most enchanting winter visitors might be snowy owls.

Every year, around November or December, snowy owls begin arriving in Acadia from their Arctic breeding grounds. Immature males travel the farthest, finding their way to fields, marshes, beaches, farms, even airports—any place that reminds them of the tundra. In the Arctic, snowy owls eat lemmings. In Acadia, they probably eat lots of chipmunks, red squirrels, and birds. A heavy, white nomad, the snowy owl hunts during the day (because it is always day in the Arctic summer), usually from a perch on the ground but also from trees and fenceposts. If winter weather is severe up north or food is scarce—or food was so plentiful that prime breeding conditions resulted in too many owls— more owls will move south in search of sustenance. These “irruptions” occur every few years, although Acadia seems to be a regular destination for the owls, which are known to return to the same locations year after year. It must be something about the bare, windswept summits, the long ocean views, the peace and quiet.

Snowy owls appear in the oral history of the native Wabanaki people. In one story, rivers and streams have dried up, and Snowy Owl seeks out the source, only to find great beasts (possibly mammoths?) drinking all the water. Snowy Owl knocks down trees. The beasts fall upon the stumps and die, and the rivers flow once again.

I’d been wanting to see a snowy owl for years. I can’t remember when it started— probably after I heard a story about snowy owls on Sargent Mountain from Rich MacDonald, naturalist, ornithologist, and proprietor of The Natural History Center in Bar Harbor. His many encounters with the enigmatic bird made him my authoritative source on the snowy owls of Acadia. Each fall, I would check in with him to see if he had seen any owls yet. I also monitored the Maine-birds forum at www.mainebirding.net/mainebirds, where birders share sightings, report rare birds, and discuss bird issues.

Last winter saw an especially strong irruption, with snowy owls appearing as far south as Kansas, Missouri, and Hawaii. More seemed to have traveled to Acadia, too. Birder friends kept sending me updates. “This is going to be your year!” they told me.

On December 4th, 2011, one snowy owl was spotted atop Cadillac Mountain and another tussled with a red-tailed hawk over McFarland Hill.

The owls are easier to see early in the season, before they camouflage against the snow. On a clear, crisp December Saturday, a friend and I hiked up the north ridge of Cadillac, taking our time and pausing often to scan the terrain and sky. It was not the first time this particular friend had come along on one of my snowy owl excursions. I promised this time there would be no ice, no epic climb on frozen slopes. There were a few other people at the top. We wandered around a bit then decided to descend by the paved road, thinking the open views might offer a better chance of seeing an owl. We saw a fat porcupine amble into the bushes on the side of the road. We did not see an owl.

Late in the afternoon of December 18th, James Bright posted that he and his wife Harriet were descending Day Mountain when a snowy owl glided over their heads, landed on the open ledges just through the woods from the carriage road, and then perched high in a scraggy spruce.

I started up the South Ridge Trail from Route 3. Winter was on by then, and the landscape had gotten icy. Snow builds up on the frozen surfaces of Acadia’s small brooks and streams; they thaw and refreeze, ice spilling out into the forest. Trails and bare granite turn to skating rinks. I hit ice as soon as the trail began to steepen. To continue would be difficult, and the sun was sinking fast. I turned around.

Rich MacDonald, patient with my inquiries and encouraging of my pursuit, provided the latest news: four snowy owls seen on Sargent in February, then a College of the Atlantic student (“who is also an amazing birder”) saw six snowy owls on Sargent Mountain.

In mid-February, Rich posted that he saw three snowy owls on Sargent.

I contacted him for details and he provided this account: “It was a perfect day: warm, mild breeze (which was a bit stiff up top). I biked (my bike has studded tires) from Jordan Pond House, down the carriage road to its intersection with the Deer Brook Trail. I followed the trail directly to the summit. No Snowies. I then followed the North Ridge Trail down almost to treeline. Nothing. Next was the trail east toward Jordan Pond; again, to treeline. Still no Snowies. From that point, I headed toward the South Ridge Trail. This is where I had all of my Snowies! Two stunning white adults and one juvenile! And this is the general area where I have had most of my Snowies in past years.”

A few weeks later, I followed his directions. Because the Deer Brook Trail winds through a steep ravine between Penobscot and Sargent Mountains and Jordan Pond, it doesn’t get as icy as other trails. Still, I walked carefully through several inches of slushy snow. I began to pay attention as I skirted Sargent Pond. I felt different this time, as if I knew the owls were waiting for me. As soon as I emerged above treeline and began ascending the open ledges of Sargent, I saw it staring at me from behind a fold in the rocks.

A smooth rounded head, yellow eyes, and soft white feathers flecked with black. I paused to take in the reality: I was seeing a snowy owl! The bird flew off toward the summit. I followed. Two, maybe three (the same one again?) owls took flight as I hiked along the ledges. Not wanting to disturb them, I turned around and went back the way I came. Had I really seen a snowy owl—multiple snow owls?! It was hard to believe, and yet, at that moment, the only thing I could believe.

“Snowy owls are a charismatic bird, visually stunning,” said MacDonald of his own fascination. “This bird represents the natural communities of the extreme northern latitudes, those mystical lands. To see a snowy owl on Mount Desert Island entails a winter hike to the mountaintops of Acadia National Park, which are home to some plant types found in the Arctic. They are an intersection of my intrigue for the far north, winter adventure, and birds. When I find a snowy owl, I like nothing better than to sit and watch, removed from the sounds of civilization.”

It’s often, oddly, not surprising when fascinations intersect, when a thing long imagined is seen in the plain and open light of a winter’s day. Go—go out for a walk and you’ll see.

CATHERINE SCHMITT lives in Bangor and is the author of A Coastal Companion: A Year in the Gulf of Maine from Cape Cod to Canada.