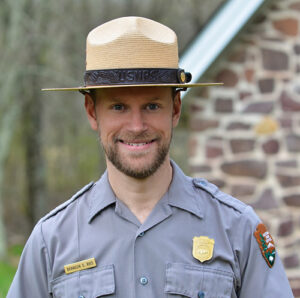 Prior to his selection, Bies was the Superintendent of Manassas National Battlefield Park in Virginia. Bies also served a ten-month special assignment as the National Park Service Deputy Chief of Staff coordinating the agency’s COVID-19 response.

“Brandon brings expertise to Acadia from many facets of park operations, communications, and community relations. We are thrilled to welcome him to the park in mid-December,” said Schneider. “He has an incredible depth of experience and is a highly accomplished professional with strong leadership skills that will help guide this park into the future.”

In his new role, Bies will work closely with Acadia’s senior management team overseeing the operation and planning for the national park. Bies’ multifaceted career includes working at the park, regional, and national office levels, including assignments in congressional affairs, as a park manager, and as a cultural resource specialist and archeologist. He has worked closely with a range of philanthropic partners and other non-profit organizations.

While at Manassas, he has focused on protecting the 5,000-acre park from several external development projects, as well as introducing critical management tools such as prescribed fire and deer control. His work in congressional affairs included advocating for several high-profile projects such as the $227M rehabilitation of the Arlington Memorial Bridge and for critical repairs to the Washington Monument. He also served as the Site Manager of Arlington House, the Robert E. Lee Memorial in Arlington National Cemetery, and a stint as the manager of Great Falls Park. Earlier in his career, working in cultural resources at the George Washington Memorial Parkway he was key in the discovery of PO Box 1142, a secret American military intelligence facility that operated during World War II.

“I am honored to be selected as the Deputy Superintendent of Acadia National Park” said Bies. “Acadia is an amazing place with incredible resources, and I look forward to joining the team and engaging in the many complex issues the park faces.”

Bies fills the position vacated by Michael Madell, who retired from the Deputy Superintendent position in July. Bies was selected through a competitive process that included applicants from across the National Park Service. Bies is a native of Delaware and holds a Master’s in Applied Anthropology from University of Maryland and Bachelor’s in American History and Anthropology from the University of Delaware. He and his wife and two sons will be moving to the area in December. They look forward to exploring all that the area has to offer and pursuing their many outdoor interests including camping, hiking, and fishing.