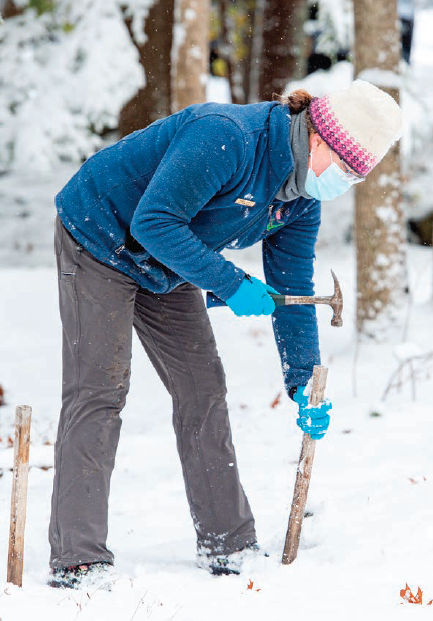 Supervisory Gardener Geneva Langley prepares the hardscape of the Wild Gardens of Acadia for winter.

As every parent knows, putting a child to bed starts well before opening the bedroom door.

When supervisory gardener Geneva Langley describes how the Wild Gardens of Acadia are put to bed for winter, there are echoes of the same step-by-step rituals and even inevitable delays. Like children, the autumn leaves slyly resist, and rakes must patiently wait.

Langley cares for the award-winning garden of 400 indigenous plant species located next to the Sieur de Monts Nature Center in Acadia National Park. It is unique because, in less than an acre, it mimics Acadia’s diverse habitats — 13 in all.

“It is wild, but tended,” says the College of the Atlantic graduate, who holds a master’s degree in ecology and environmental science from the University of Maine. With 13 years of experience working alongside volunteer gardeners from April into November, this consummate list-maker reels off an end-of-the-season routine that may be surprisingly familiar to home gardeners.

The first step in the process begins in mid-September, when the gardens enjoy a fall feeding of compost mixed with leaf duff, the decomposed litterfall rich in nutrients. Year-round, the gardeners collect leaves and other materials, which they turn and sift to create the next year’s compost.

In September, they spread the joy.

They also begin pruning trees and shrubs. Up to this point, “we have been busy looking down,” says Langley. “But fall is a good time to start looking up.”

As the leaves fall and tree structure becomes visible, the gardeners prune both for aesthetics and the health of the plant. They remove dead wood and branches that cross and rub, a particular problem for winterberry, the native holly with bright red berries that brightens the winter landscape.

Gardeners also cut back the tough stalks of large ferns, such as the cinnamon and interrupted ferns. Doing so in the fall rather than during spring clean-up prevents damage to the little fern croziers as they push up out of the ground.

“We add plants to the garden every year,” Langley continues. Late-season planting occurs aft er the drought stage when it is less stressful for plants to adapt to a new environment.

In fact, the process of adding plants hearkens back to the garden’s history as “a plant propagation experiment,” according to Langley. In 1961, Acadia National Park Superintendent Harold Hubler offered three-quarters of an acre of park land for volunteer gardeners in the community to grow and display wildfl owers.

The plot, however, was covered with blackberry bushes and mature red maples damaged by the Great Fire of 1947. The Wild Gardens of Acadia committee began laying out paths and introducing plants — all native to Mount Desert Island.

Paths now link the diff erent areas featuring plants from Acadia’s many habitats. Depending on the time of year, a visitor can see skunk cabbage in the marsh area, columbine and three-toothed cinquefoil on the mountain, and goldenrod and purple aster in the meadow, to name just three of the ecosystems. 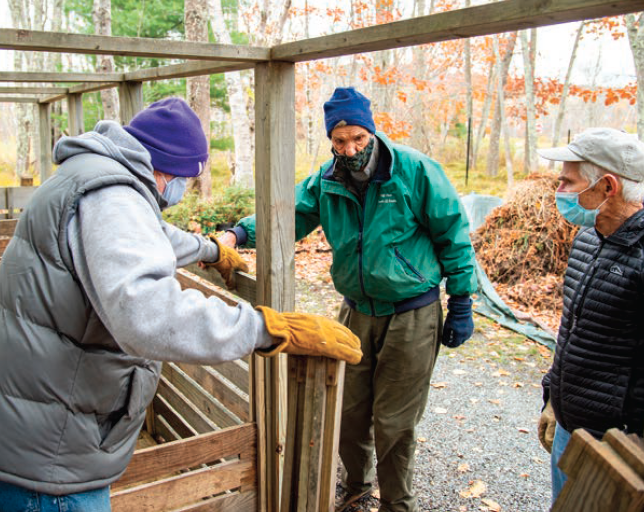 Raking the paths interlacing them all is an ongoing fall activity, both to guide visitors and to keep the garden appealing. “But we use all of those leaves,” Langley reminds us. “We tuck them into the beds as insulation. Once they have enough, the leaf piles go to our work area and become the following year’s leaf duff .”

Gardeners must also take care of plants that have been donated and are still in pots. They surround them with mesh fencing, banking them with leaves and straw for protection.

The final steps are familiar to home gardeners. Tools are cleaned and sharpened. Garden ornaments, such as a bird house from the thicket and a lobster pot from the beach, are stored in a shed. The irrigation company comes to drain and blow out waterlines and turn off the system.

And, of course, there’s deer protection. Although the garden is fenced, a rough Maine winter can blow over enclosures and freeze them in place. So, the favorite plants of deer — muskrats and beaver, too — receive the protection of cages.

At the last minute, the meadow is cut down to the ground. “Meadows thrive on disturbance,” Langley says. Reducing it to just “stubble” prevents unwanted shrubs and trees from getting established. It also helps spread seeds.

Other winterization tasks refl ect the fact that this is a public garden. For example, signage must be put away. And this year, because paths were roped for one-way traffi c as a safety measure due to COVID-19, stakes and ropes had to be removed and stored.

The pandemic also prompted the decision to post greeters at the garden’s entrance to ensure counts stayed below restrictions on the size of public gatherings. But these volunteers also oriented visitors to the gardens’ layout and answered questions.

Stephanie Clement, conservation director at Friends of Acadia, challenged children to fi nd a fl ower the color of their shirts or to check out bug “casualties” in the carnivorous pitcher plant and sundew. Hikers who had toured the garden prior to hitting the trails reported back on what plants they now noticed. “That was especially fun,” Clement says.

The Wild Gardens of Acadia have been described as a “living fi eld guide.” With the help of greeters, gardeners, and ubiquitous labels, visitors learn about Acadia’s many diff erent habitats — a special quality of this national park. Mount Desert Island is situated near the boundary of two major biogeographic regions, so it off ers a unique mixture of northern and southern plant species.

And with them come the wildlife of that habitat, whether a lightning-fast blue heron spearing a trout or a very hungry swallowtail caterpillar devouring willow leaves. “As a gardener, you look aesthetically, but animals rely on these plants for survival. I think that big picture is important,” says Langley.

Even at the end of the season — having checked so many things off her list — Geneva Langley has a hard time controlling her excitement about the Wild Gardens of Acadia. “Look at this plant,” she says. “If you hold the seed just right, it explodes.

“Or did you know that a crab spider turns pink when it sits inside a rose so it can ambush bees? It actually catches and eats bees!” And that, in the end, might be her best gardening tip. Coming to the Wild Gardens of Acadia is a way to slow down and really look. 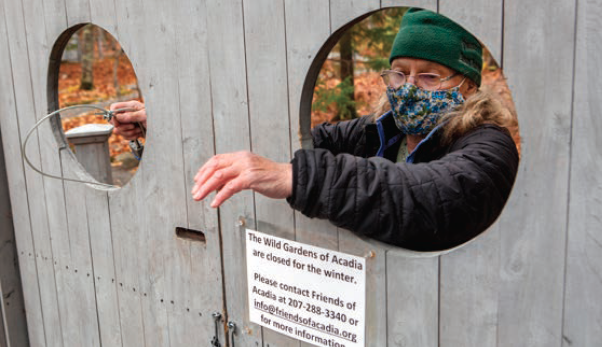 The Wild Gardens of Acadia sit inside Acadia’s boundaries but, like so much in this national park, bear the ﬁ ngerprints of generous individuals. The garden itself was created by volunteers and is primarily maintained by such a cadre today.

“We have amazing volunteers,” says supervisory gardener Geneva Langley. They include people who like to get their hands dirty, as well as docents and greeters. A decade ago, the Wild Gardens of Acadia became an ofﬁ cial committee of Friends of Acadia, which now sponsors a supervisory gardener and an intern. FOA also helps fund tools, infrastructure repairs, and educational materials.

In this way, Friends of Acadia offers stability and assistance to a resource that is a rare asset. Very few national parks have a native plant garden of this size and scope, and the Wild Gardens of Acadia is certainly one of the oldest.

This article appeared in our Winter 2021 Acadia magazine.

Putting the Wild Gardens of Acadia to Bed for the Winter