For more than three decades, the partners have deftly blended private-sector philanthropy with Congressional action and park management priorities. That combination ensures that the 45-mile system, including its masonry bridges, continues to be a primary conduit for sharing the scenic, natural, and cultural resources of the park with current and future generations of Americans.

The partnership continues a long, proud tradition in one of the country’s most-loved national parks, the first established in the eastern United States and the first created entirely from private lands. In its latest incarnation, that cooperation achieved the complete restoration of the park’s carriage roads, which began in 1994 and culminated in 2021 with the reconstruction of the six-mile Eagle Lake loop. 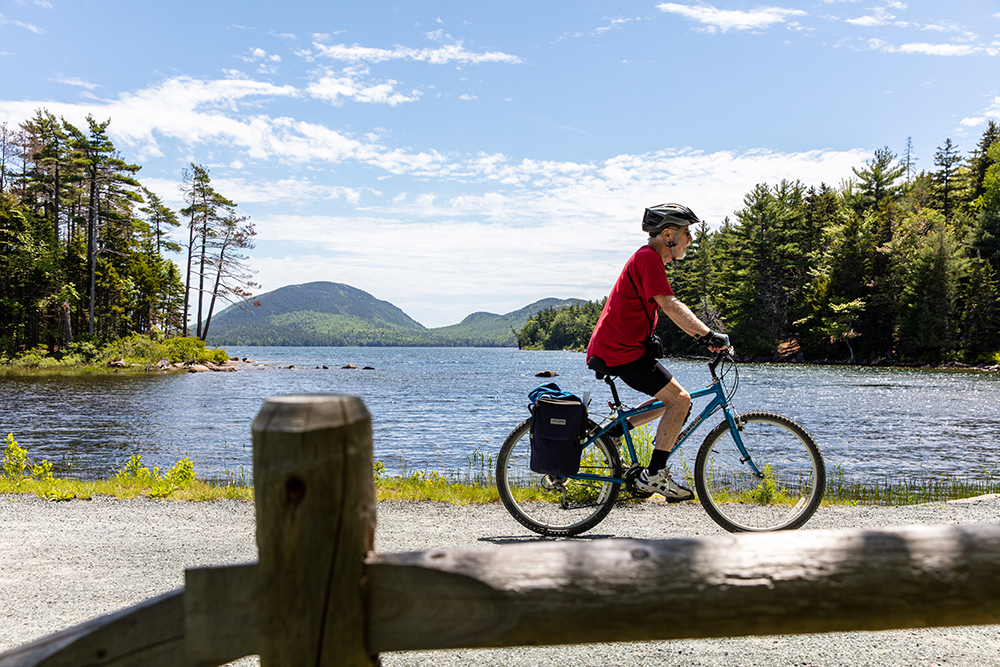 Rockefeller’s Vision for the Roads

More than any other individual, the system would not exist if it were not for the vision and drive of philanthropist John D. Rockefeller, Jr. A Mount Desert Island (MDI) summer resident, he had extensive experience in the laying out and construction of carriage roads, having enjoyed the system built by his father around the family estate at Forest Hills, Ohio. He also assisted his father in creating a 65-mile network around the family’s estate at Pocantico Hills in upstate New York.

Rockefeller purchased a summer residence, the Eyrie, at Seal Harbor in 1910. His desire to enjoy his horses and carriages free from motor vehicles spurred him to begin building carriage roads on his own lands surrounding Little Long Pond in Seal Harbor. From there an inspired system quickly took shape with Rockefeller acquiring more lands to expand the network (with the intention from the start of donating it, upon completion, to the nascent national park) and securing permission from the National Park Service to access park lands with all work being done at his expense.

Rockefeller called upon the country’s top landscape professionals such as Beatrix Farrand and Frederick Law Olmstead, Jr. for assistance in the layout of the roads, siting of scenic vistas, and environmentally appropriate plantings. He also hired talented tradesmen and laborers, many of whom were immigrants, who were responsible for bringing Rockefeller’s vision to reality. In all he spent around $4 million, the equivalent of around $65 million today, although that amount could not come close to re-creating such a system now.

Rockefeller’s vision proved extraordinarily prescient. It is impossible to image Acadia without such seemingly organic access to the natural beauty and solace sought by those seeking to escape more crowded and congested parts of a park that hosted more than 4 million visits in 2021.

Restoring the Roads to Their Original Glory

Much like the original construction of the system, which was done in phases between 1913 and 1940, the efforts to restore the carriage roads to their original glory spanned several decades.

Acadia, like many units in the National Park System, suffered from a lack of funding during the later decades of the 20th century, most of that shortfall coming in budgets for infrastructure and maintenance. By the late 1970s, and early 1980s, encroaching vegetation, erosion, and washouts resulted in carriage roads that offered a less-than-satisfactory visitor experience. In fact, it was a testament to the design and quality of the carriage roads’ original design and construction that they endured for as long as they did without regular and routine attention.

Finally, in 1989, the National Park Service completed a Historic Resource Study for the Carriage Road System that provided the foundation for the restoration, maintenance, and use of the carriage roads.

The emerging clout of Friends of Acadia, formed just a few years earlier in 1986, helped sound the clarion call that the status quo was no longer acceptable. Rather than merely advocate, or as some organizations do, demand, the government act, Friends of Acadia offered to be part of the solution as well, ensuring that the carriage roads not only would be restored but that such a deteriorated state never be allowed to happen again.

Much like the construction of the carriage roads themselves, which took design, engineering, and political skill, as well as financial largess, the efforts to restore them required an adroit commitment to pushing ahead simultaneously across divergent spheres of influence. Friends of Acadia was uniquely positioned to assist on all fronts.

Nearly five decades had passed since the last of the carriage roads had been constructed so the partners decided to do a pilot restoration of more than a mile in the valley known as the Amphitheater. Friends of Acadia board members Frederic “Rick” Bourke and David Rockefeller, Sr. son of John Jr. joined forces to fund the project and shepherd its completion.

The success of that effort culminated in a meeting between Friends of Acadia and the National Park Service with Interior Secretary Manuel Lujan, Jr., Maine U.S. Representative Olympia Snowe, and Maine U.S. Senators William Cohen and George Mitchell at the Jordan Pond House to discuss the rehabilitation of the remainder of the system. Subsequently, an unprecedented agreement was struck whereby the federal government would provide $4 million in funding to restore the carriage roads while Friends of Acadia would raise $4 million to create an endowment aimed at generating funds to care for the roads in perpetuity. The first gift to that effort came from then Friends of Acadia Board Chair Charles Tyson, Jr. who also headed up the organization’s Carriage Road Rehabilitation Campaign Fund Steering Committee.

As David Rockefeller commented at the time, “The restoration of the Acadia Carriage Roads through joint efforts of the Congress and private initiatives, is a wonderful development for Mount Desert Island. It is a fine example of the effectiveness of public-private cooperation.” 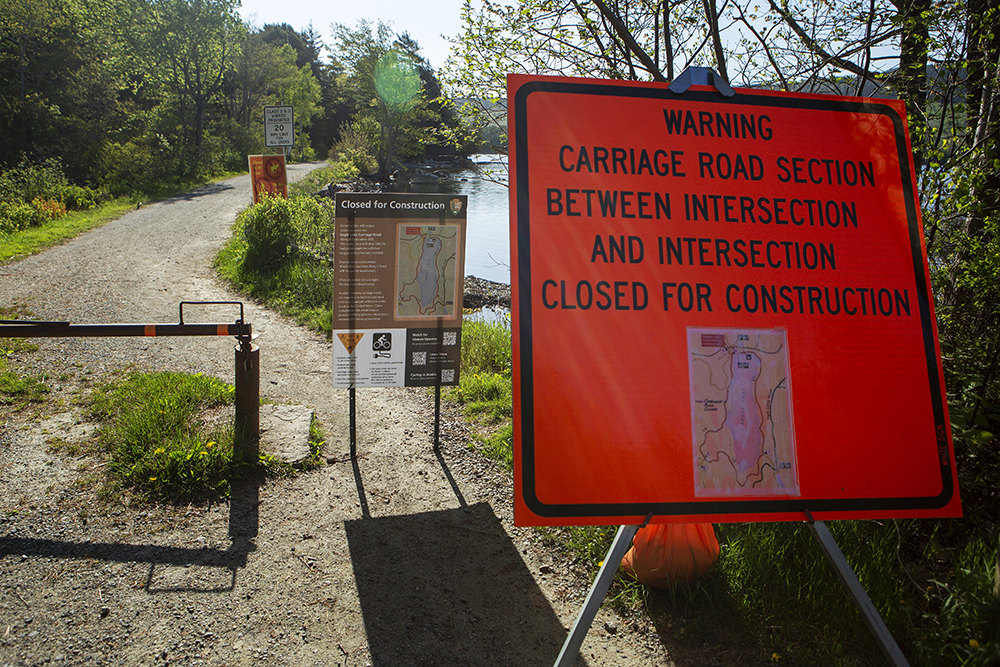 Construction closure on the north side of Eagle Lake. (Photo by Ashley L. Conti)

Rehabilitating the carriage roads was a far more complicated effort than just filling washouts with gravel and removing unwanted vegetation. The system, which was listed in the National Register of Historic Places in 1979, features numerous stonework structures such as culverts and retaining walls, 16 unique granite bridges and two gatehouses in the park. The road surface was designed to incorporate intricate layers of successively smaller stone, and a final surface comprised of finely ground granite, clay, and other components. Marshaling the proper equipment, sourcing unique materials, and tapping long-dormant expertise was not easy.

“The roads were in terrible shape when we began,” explained Acadia’s Road Superintendent at the time Merle Cousins. “The only section that was maintained to any degree was around Eagle Lake. It was simply a matter of money.”

According to Doug Hopkins, former general manager of Greenrock, the organization that manages Rockefeller family properties, core samples were taken on the roads to help better understand their construction and inform modern design specifications. All that preliminary investigation only prompted those involved with the restoration to be impressed with the original builders.

“Those engineers did a fantastic job of laying them out and building them so that everything about them worked to the advantage of the road,” Cousins said.

The first $1.2 million in federal funds was included in the FY 1992 budget.

In the summer of 1994, Harold MacQuinn, Inc. of Bar Harbor was hired to begin the first phase of restoration. Company founder, Harold MacQuinn, had worked for John D. Rockefeller, Jr. building carriage roads and parts of the Park Loop Road. He, and eventually his son Ronnie, and grandson Paul who now runs the firm, provided their multiple generations of expertise to the work.

In the intervening years, subsequent federal appropriations to honor the government’s original commitment as costs increased were secured thanks to the continued commitment of the National Park Service, as well as members of Maine’s Congressional Delegation.

Fittingly, the National Park Service awarded the construction contract to Harold MacQuinn, Inc. for the final phase of the work—the six-mile loop around Eagle Lake completed in summer 2021.

Over the past 25 years, the original $4 million dollar endowment created by Friends of Acadia, has gradually grown with additional gifts and investment returns, and has provided more than $5 million to help maintain the restored carriage roads. Friends of Acadia’s annual Take Pride in Acadia Day was the brainchild of Merle Cousins back when the park’s maintenance resources were thin. The event now attracts as many as 400 volunteers to clear leaves from the carriage road ditches before winter each year, providing even more assistance for the systems’ upkeep.

And, in August of 2019, the paddle raise at Friends of Acadia’s annual benefit brought in more than $300,000 earmarked to help the National Park Service maintain 16 historic carriage road bridges in the park. 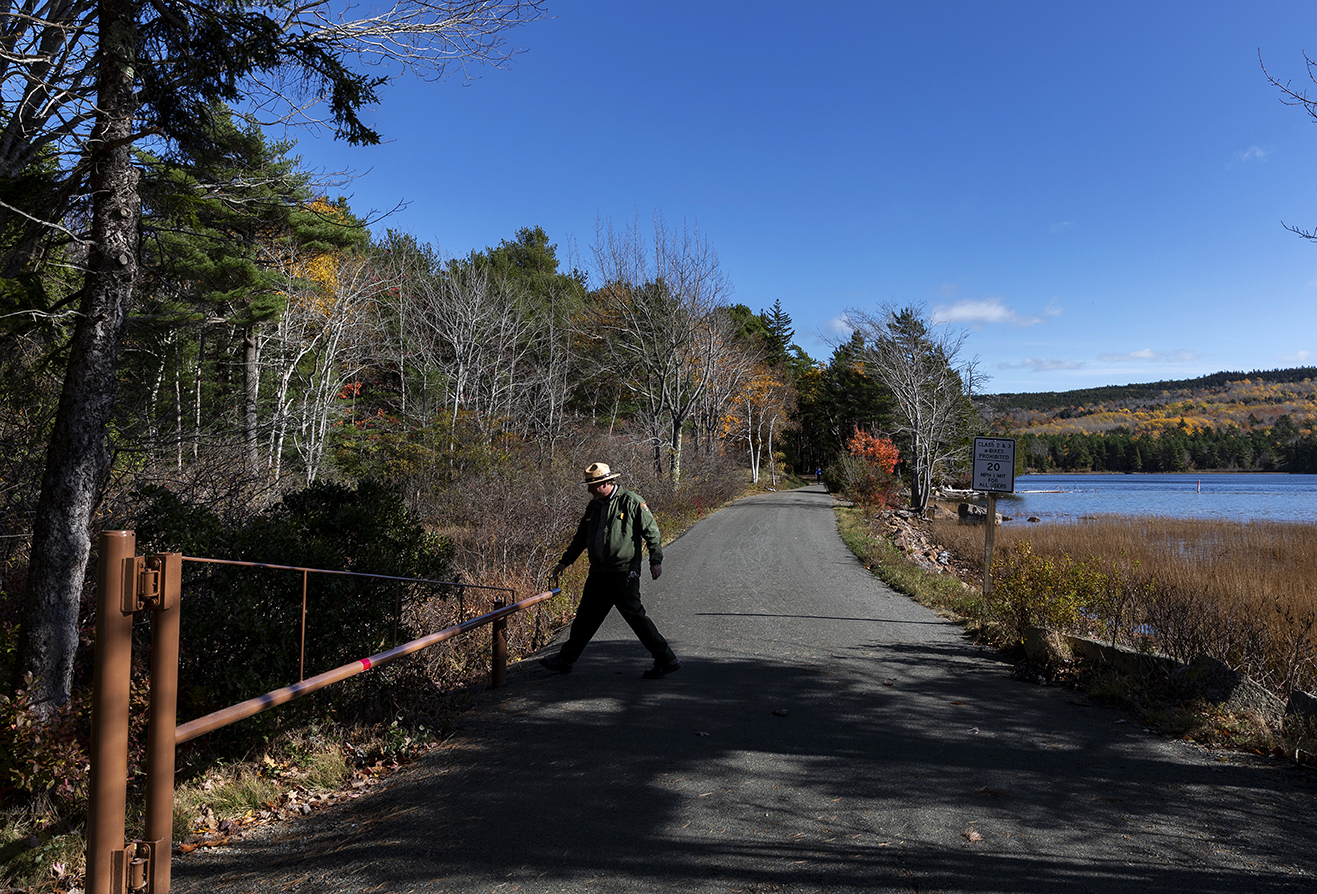 Now that all of the carriage roads in the park have been restored, the commitment of succeeding generations of thoughtful stewards will face new challenges as they strive to maintain continuity. Among the biggest concerns is climate change. Changing weather patterns threaten to test to the breaking point the original design specifications and century-old infrastructure.

In the spring of 2021, a storm described by park managers as “one of the most exceptional weather events in park history,” dropped five inches of rain over the heart of the park in just a few hours. Some ten miles of carriage roads were closed due to heavy damage, and the cost of repairs is estimated to be around $500,000.

Park managers are concerned that the frequency and intensity of major weather events will only increase, adding new challenges to keeping the carriage roads in top shape.

Efforts to protect Acadia’s carriage roads continue to this day with the park’s Transportation Plan, which was approved in 2019. To reduce congestion and improve visitor safety caused by visitor vehicles parked along the state highway to access the carriage road at Eagle Lake, the Transportation Plan includes the creation of an off-road parking area to provide a new access point. As part of the restoration work completed in summer 2021, a connector path between the proposed parking lot and the carriage road was created, thereby making the final accomplishment of the rehabilitation process also becoming, in effect, the first act of what is to come next.

While unforeseen challenges may lie ahead, the resources for meeting them head-on are undoubtedly the same that have served the public-private partnership so well for more than 100 years—commitment and continuity.

In the 1950s, Freeman Tilden, regarded as “the father of interpretation” in the National Park Service, puzzled that Acadia’s carriage roads were strangely underused. He held a firm belief that their intrinsic and transcendent values eventually would be rediscovered by future generations. “Someday the spark that will lead the public to them will flash,” he predicted. “And they will come into their own.”

By any measure, thanks to decades of private and public partnership across multiple generations that have joined forces to protect one of Acadia’s most-valued resources, Tilden’s prophecy, has finally come to pass.

This story appeared in the Winter/Spring 2022 Acadia magazine.