Take Heed of the Hemlocks

Invasive hemlock woolly adelgids are endangering eastern hemlocks in Acadia. Learn about the multi-pronged approach to mitigate their impact on MDI and in the park during a free webinar on Jan. 25. Register here. 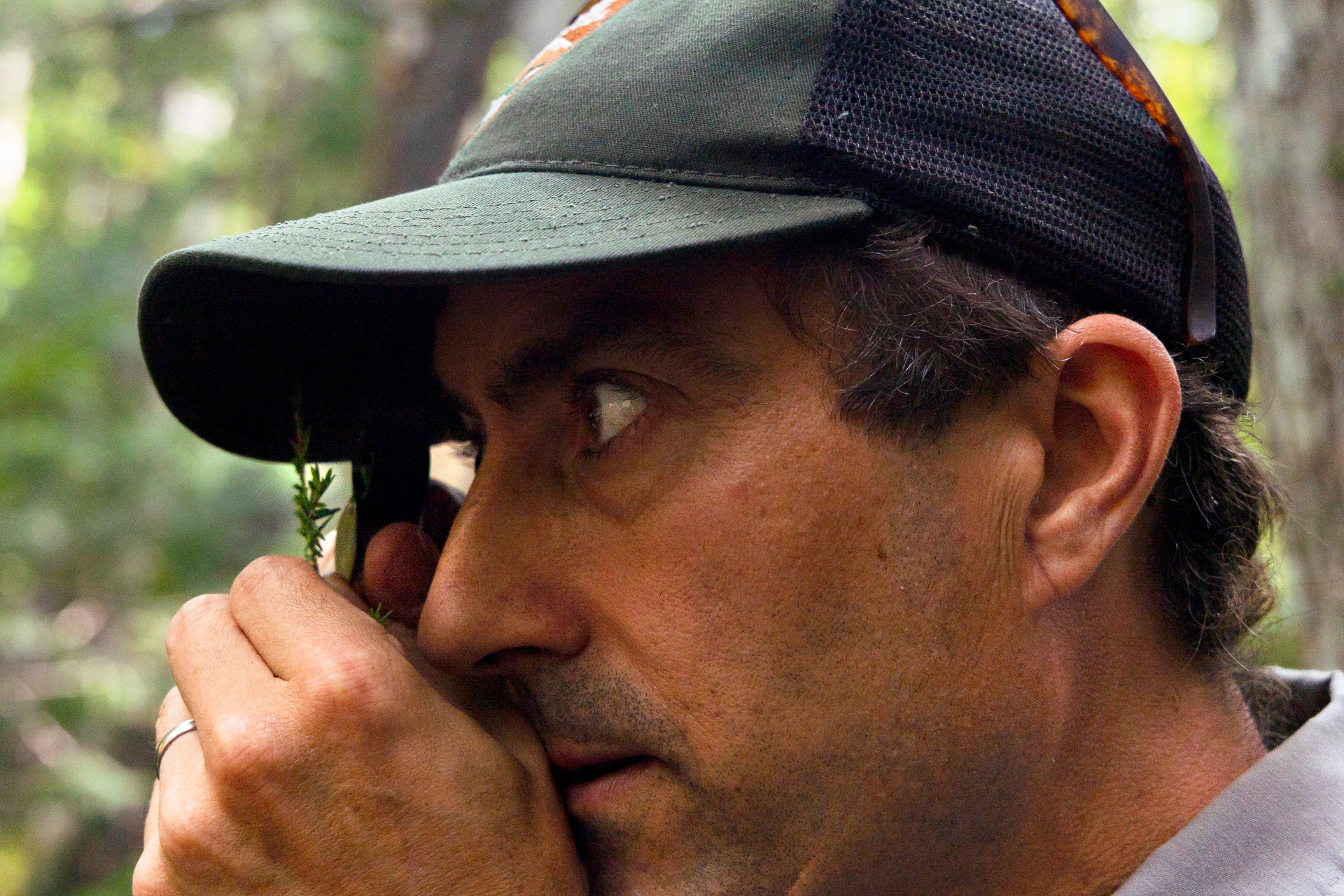 The hemlock woolly adelgid (pronounced “uh-dell-jid”) is a clingy little insect. Its preferred place to nestle is the underside of new branches and twigs on hemlock trees.

These aphid-like insects suck nutrients from the hemlock’s twigs, ultimately killing the tree. They’ve already wreaked havoc on many hemlocks on the east coast of North America—and they’ve arrived in Acadia National Park.

The insect was first detected on the east coast in Virginia in the 1950s. In the early 1980s, it was found in New York. It continued its creep up the coast and was first spotted in a forest on Mount Desert Island in 2020.

This summer, hemlock woolly adelgids were discovered within the boundaries of Acadia. This certainly isn’t the first invasive species to be detected in the park. Acadia’s Invasive Plant Management Team monitors more than two dozen invasive plant species—including glossy buckthorn, Japanese and common barberry, and exotic bush honeysuckle—removing what they can each year.

But the hemlock woolly adelgid’s presence is particularly worrisome because of the potential domino effect it could have on Acadia’s forests. 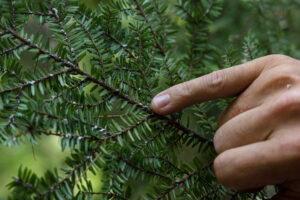 Join this free presentation to learn about hemlock woolly adelgid (HWA) and its effects on the environment, what we are doing on MDI, and most importantly, what you can do about HWA on your property.

The webinar presenters are working together on a multi-pronged approach to mitigate the impact of HWA on land they manage and on private properties.

Register For the Free Webinar

While coastal Maine’s forests are well known for their spruce, “the eastern hemlock is a keystone species,” said Jesse Wheeler, Vegetation Program Manager at Acadia National Park. “Its presence creates a whole habitat and ecosystem. Without it, that ecosystem fundamentally
breaks down.”

Healthy eastern hemlocks can live for 800 years or longer. “They’re one of the oldest living organisms in this region’s old-growth forests,” Wheeler said. They’re tolerant of shade and can grow in stands of fellow hemlocks or mixed in with deciduous trees.

Hemlocks provide year-round shade to streams, helping to maintain cool water temperatures, which is critical for stream salamanders and fish, including brook trout. They create a cool and damp environment that supports unique plant communities. Deer and moose eat hemlock needles and twigs; squirrels, chipmunks, and voles will eat the seeds. The black-throated green warbler and blue-headed vireo depend on forests that include hemlock. Look up in the forest canopy and you might spot a porcupine sitting in a hemlock munching on branch tips. 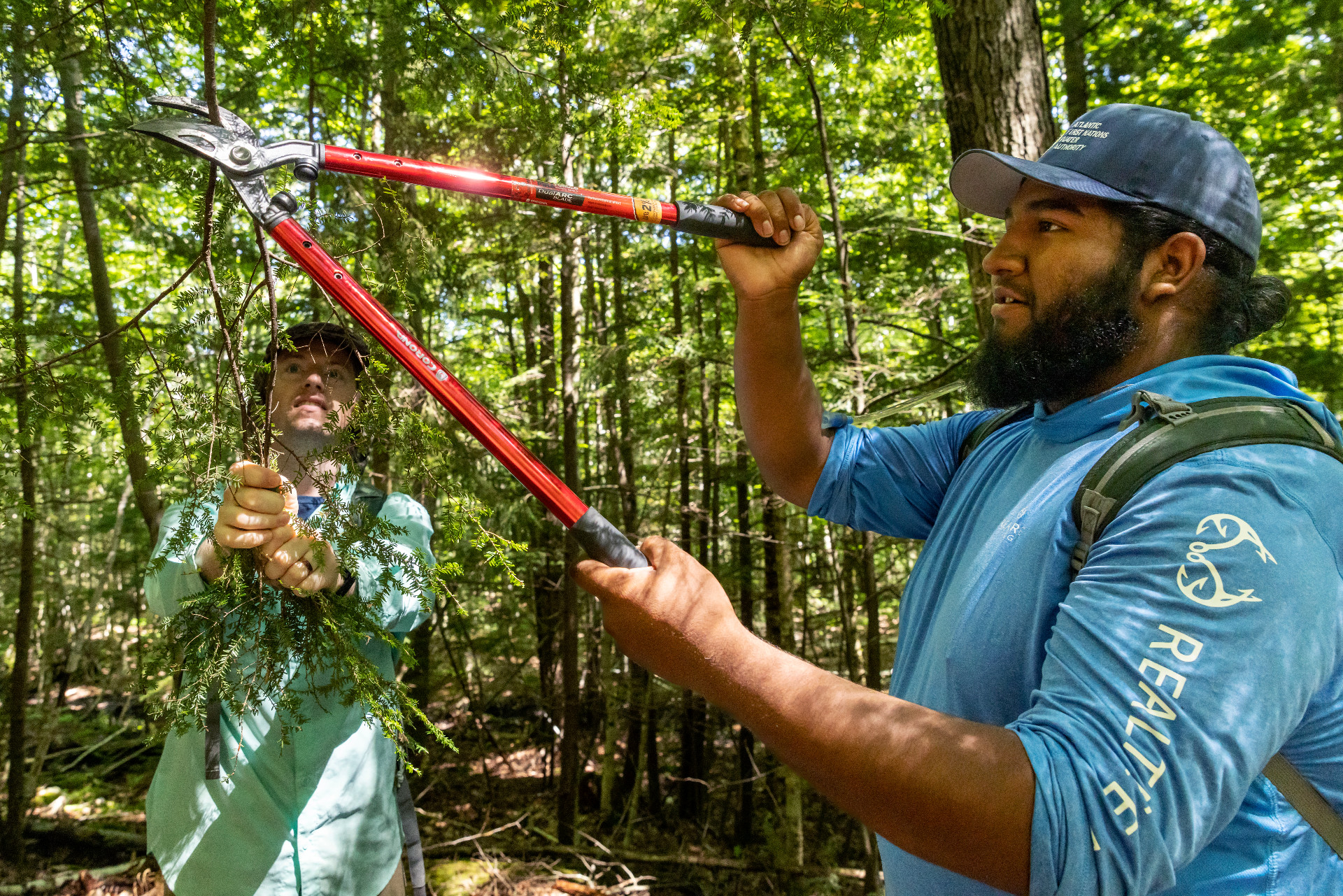 “Even as the climate changes in Acadia, hemlock is expected to do okay,” Wheeler said. The same can’t be said for spruce, fir, and birch. Eastern hemlock’s biggest threat now is the hemlock woolly adelgid’s expediency.

In Shenandoah National Park, hemlock woolly adelgids have decimated upwards of 95 percent of eastern hemlocks since they were first detected in the park in 1988.

In the northeast, our cold winters help stymie invasive insects. “Farther south, where it’s warmer, hemlocks with hemlock woolly adelgids die within five years,” Wheeler said. “Up here, a healthy tree can survive a decade or 20 years or more.” But projected increases in winter temperatures could mean hemlocks in Acadia succumb to invasive insects at accelerated speeds and that the adelgid’s expansion range increases.

There’s also a question of what might take the hemlocks’ place.

“If we lose hemlocks, what else is going to grow there?” Wheeler wondered. Invasive plants can often out-compete native plants—they leaf out earlier, their leaves stay on longer, they have fewer, if any, predators.

For now, the park’s focus is on monitoring—identifying where the hemlocks are using vegetation maps and remote sensing data from satellites—to detect trees under stress and better prioritize for conservation management.

“Acadia might not always look like a coastal spruce forest, which is unfortunate,” Wheeler said. “That’s where we’re at. But a wholesale change of an ecosystem we don’t
want to see.” 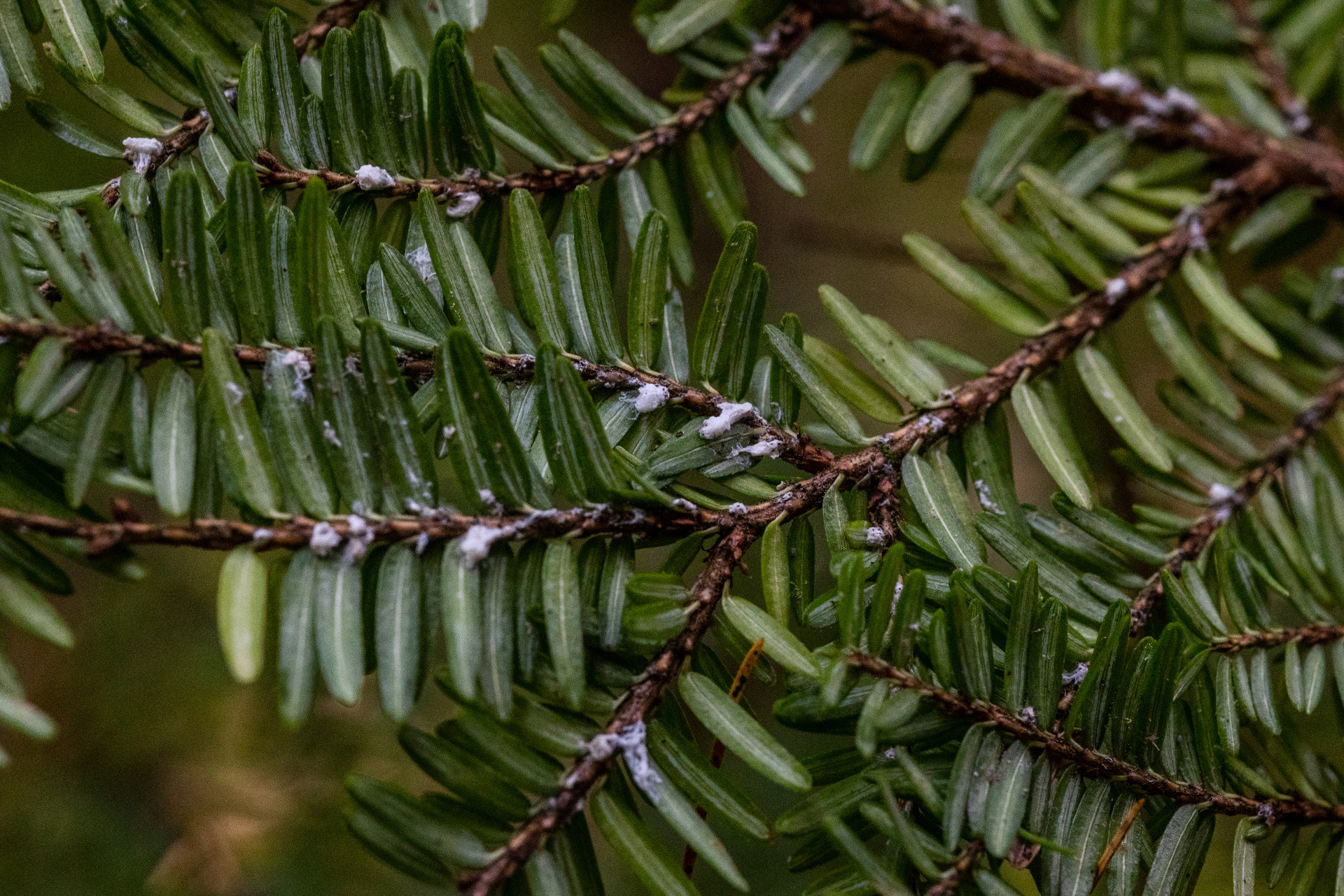 Several hemlock woolly adelgid cling to the twigs of a hemlock tree. The invasive pest is threatening hemlock trees in the area. (Photo by Sam Mallon/Friends of Acadia)

How to Spot a Hemlock Woolly Adelgid

Flip over a hemlock twig on an infected tree and you’ll find them clinging to the base of the needles. As adults, they’re small—1.5 mm—oval, and black. They secrete wax out of glands on their backsides that looks a bit like wool, which makes adelgid look something akin to the end of Q-tip. Newly hatched nymphs—also known as crawlers—are much smaller and reddish-brown.

Where are the males? Winged males and females do hatch as part of the spring generation (which also includes wingless females). The winged adelgids fly off to find spruce trees on which to mate and reproduce. Unfortunately for them, none of the spruce species in North America is suitable, and they all soon die off.

How You Can Help

You can help reduce the rate of spread by cutting back branches from trails, roads, and driveways. If you are a landowner in Maine and find hemlock woolly adelgids on your hemlocks, contact Maine Forest Service or report a sighting on their website.