This summer, Tim Mount and Lynne Macco became the first to reside at the Bass Harbor Head Light Station since it was transferred in 2020 to the National Park Service. 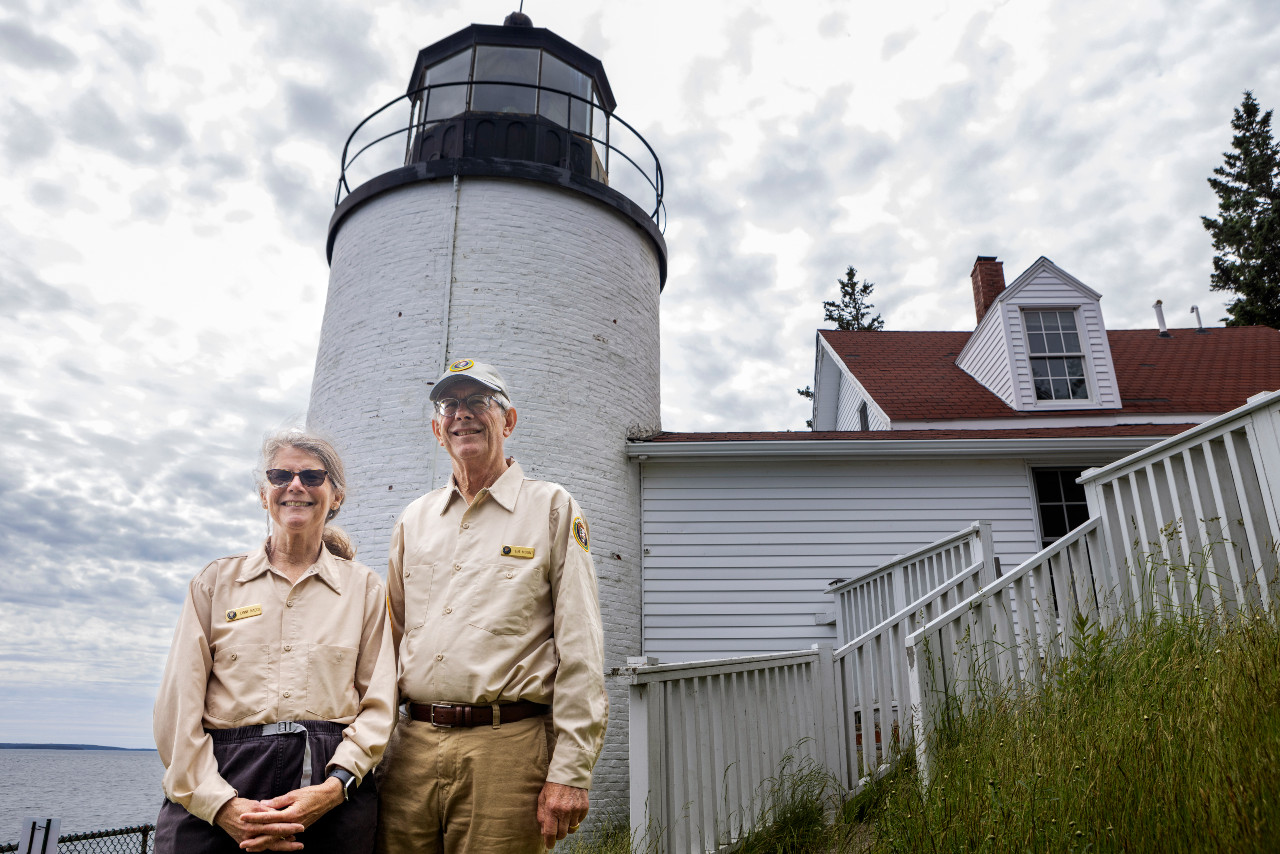 When Tim Mount met Lynne Macco in 2005, he asked, “Would you ever be interested in being a lighthouse caretaker?” Her answer to what might be a unique question in the dating ritual was “Absolutely” and, three years later, they were living on Seguin Island, two miles off the Maine coast. They left the island only once a week to shop and do laundry. Seguin was only the start of their lighthouse adventures.

This summer the Adirondacks-based couple became the first to reside at the Bass Harbor Head Light Station since it was transferred in 2020 to the National Park Service from the U.S. Coast Guard, which remains responsible for maintaining the light as an aid to navigation. 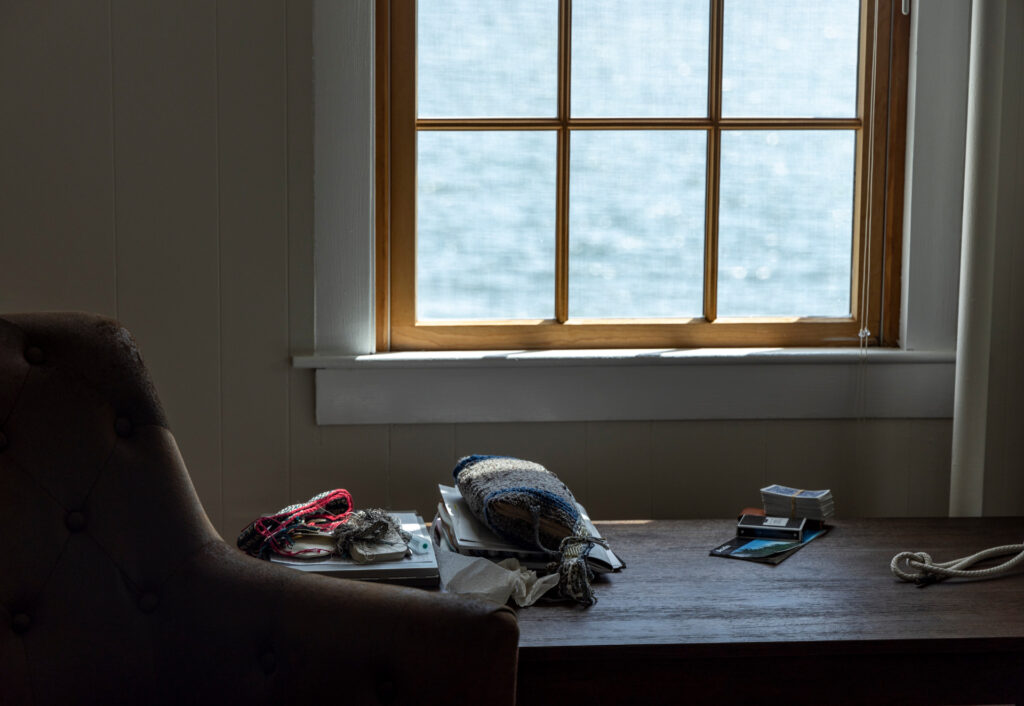 The living quarters at Bass Harbor Head Light Station provide quite the view. (Photo by Lily LaRegina/Friends of Acadia) 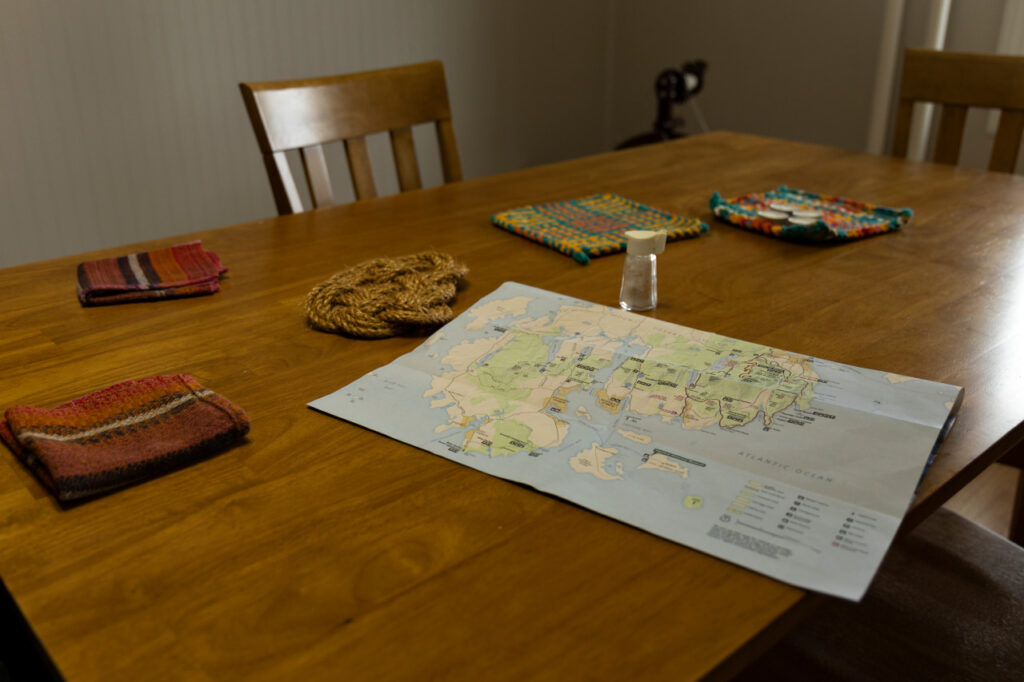 A map of Acadia National Park and other personal items are spread out over the dining room table of the Bass Harbor Head Light Station’s living quarters.(Photo by Lily LaRegina/Friends of Acadia)

“One reason Lynne and Tim were selected from about 50 applicants on volunteer.gov is that they had lots of experience as lighthouse volunteers,” said Kathy Grant, a supervisory park ranger who is a specialist in visitor experience.

That includes caretaking lighthouses off the coasts of Maine, Massachusetts, Washington state, and Alaska. Three times they’ve been to a 4,000-acre island near Tasmania, where the only visitors are sailors in the summer. “They drop you off with all your provisions and come back for you three months later,” said Lynne. It is their favorite experience so far.

Though these lighthouse adventures have brought them to some remote locations, Lynne still practices medicine. Tim practices piano. A retired university choral director and singer, he now gives chamber music concerts. His keyboard goes everywhere, even when there’s no hot water, drinking water, or flush toilets. 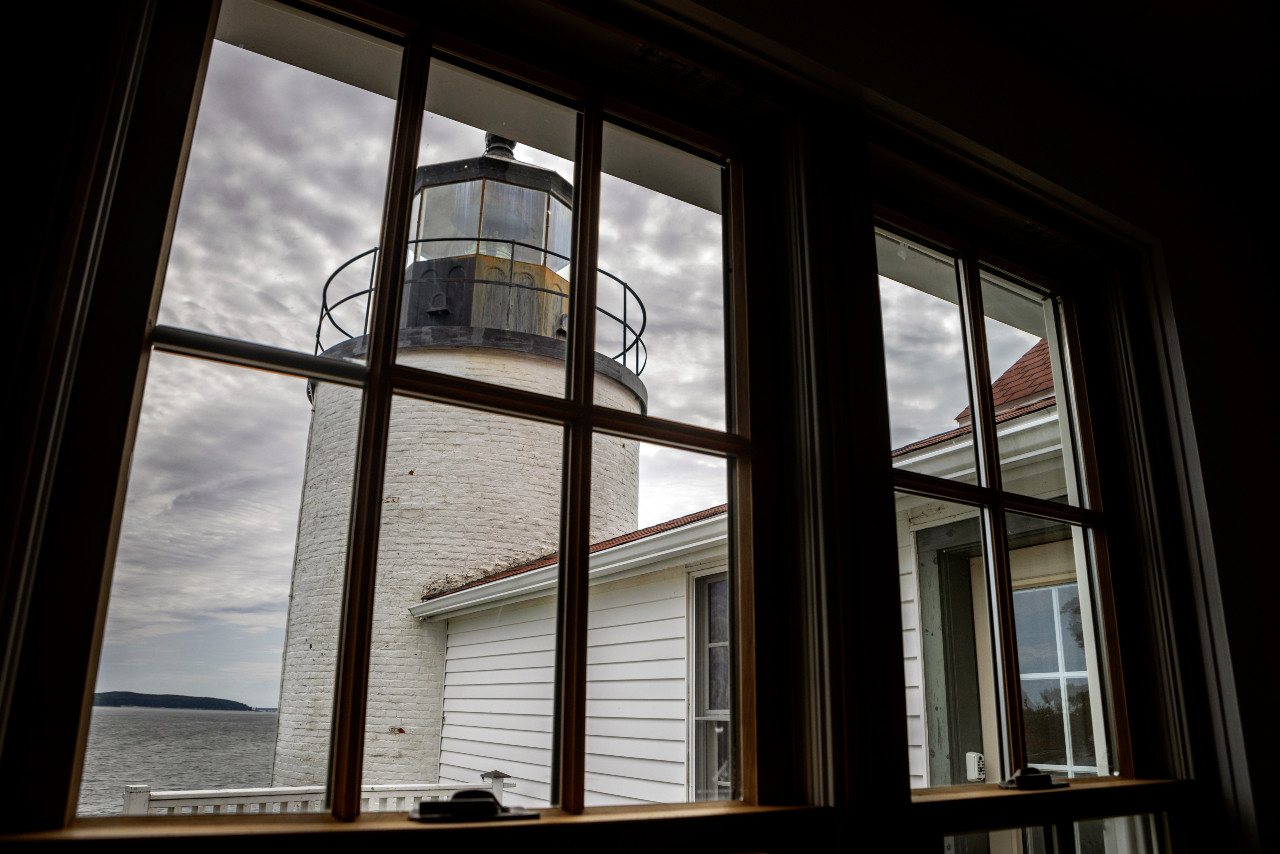 The Bass Harbor Head Light Station from a window within the living quarters. (Photo by Ashley L. Conti/Friends of Acadia)

The couple’s tenure in Bass Harbor presents a different set of challenges. According to the job description, the light station is the fifth most popular site in Acadia National Park, drawing over 180,000 visitors annually. As uniformed volunteers, Lynne and Tim provide basic information about the park, but also monitor parking issues and report accidents.

Sharing a 32-hour work week, they also have some building ­warden and grounds-keeping duties. (That’s fine with Lynne who describes herself as the “small engine repair person.”) Housing is free. 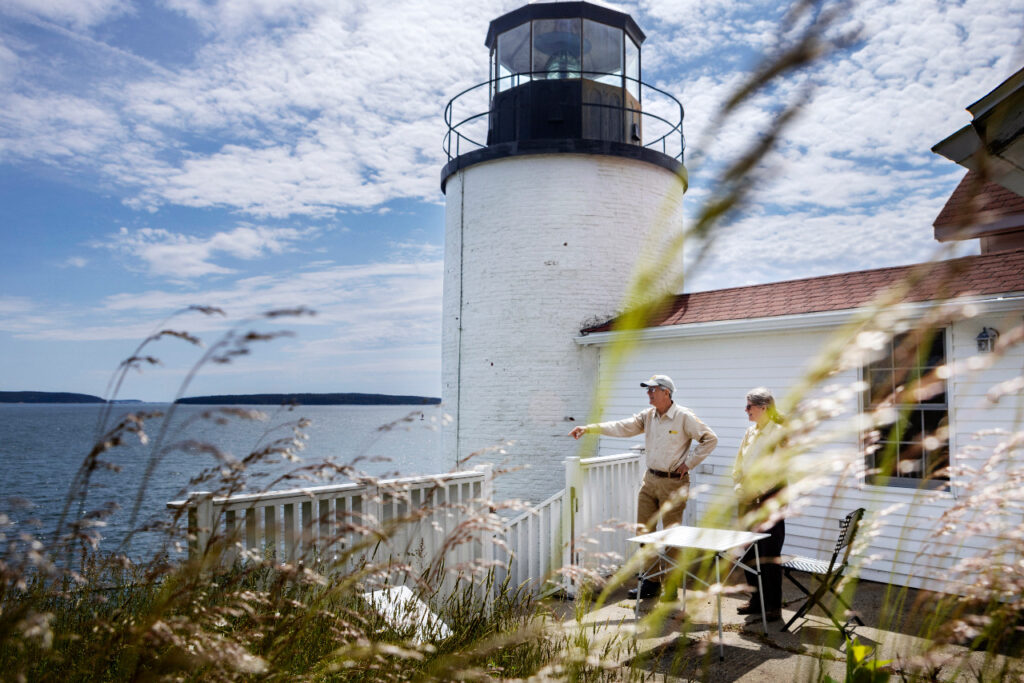 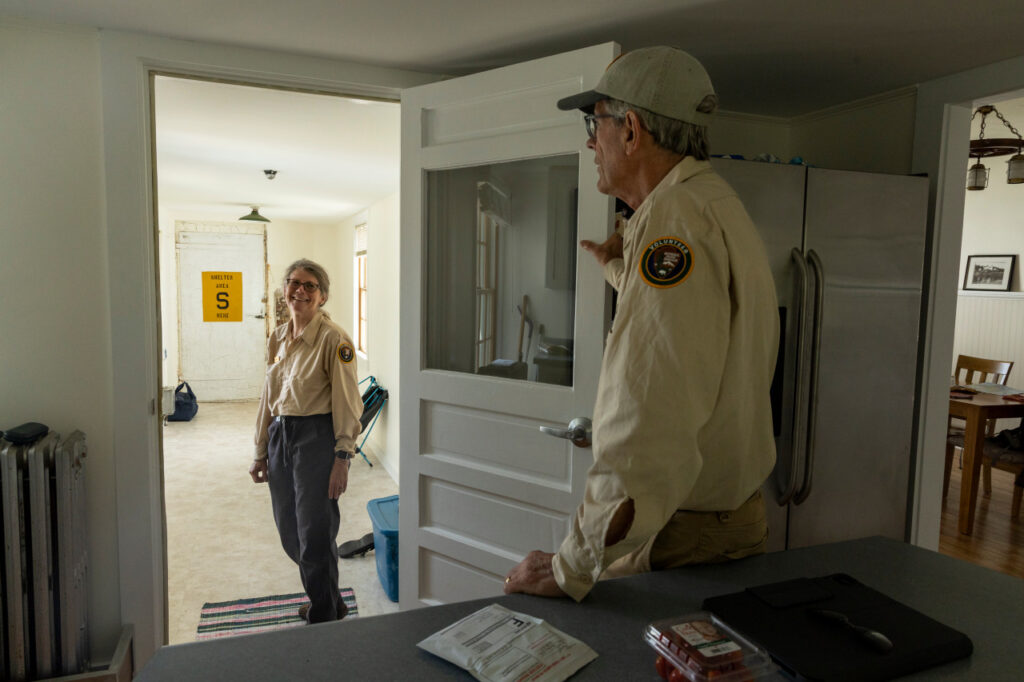 Lynne and Tim take a break from visitors inside the Bass Harbor Head Light Station living area. (Photo by Lily Regina/Friends of Acadia)

Working at a light station today in Acadia (which has a total of three lighthouses) is a far cry from the traditional isolation for which the role is known. In the 1920s, then-Secretary of Commerce Herbert Hoover, concerned about the loneliness and monotony people faced in such an important job, appealed-successfully-to the public to donate radios for each light station to reduce their isolation.

Today, lighthouses are such an icon of coastal charm that it may be easy to forget their importance to maritime safety. In fact, they were so critical to the commercial success of the young United States that before the new Senate even acted on congressional salaries or appointed a single cabinet member, it sent a decree in 1789 to George Washington to fund lighthouses.

The Bass Harbor Head Light Station was built in 1858 high on a rocky promontory-the tower itself rises 32 feet-to help vessels avoid the “large and dangerous reef’ in the middle of the harbor. Like other light stations, it also included a keeper’s house, bell house, and oil house for storing the fuels to power the light, from whale and porpoise oils, to kerosene, to electricity in 1948. It was listed in the National Register of Historic Places in 1988. 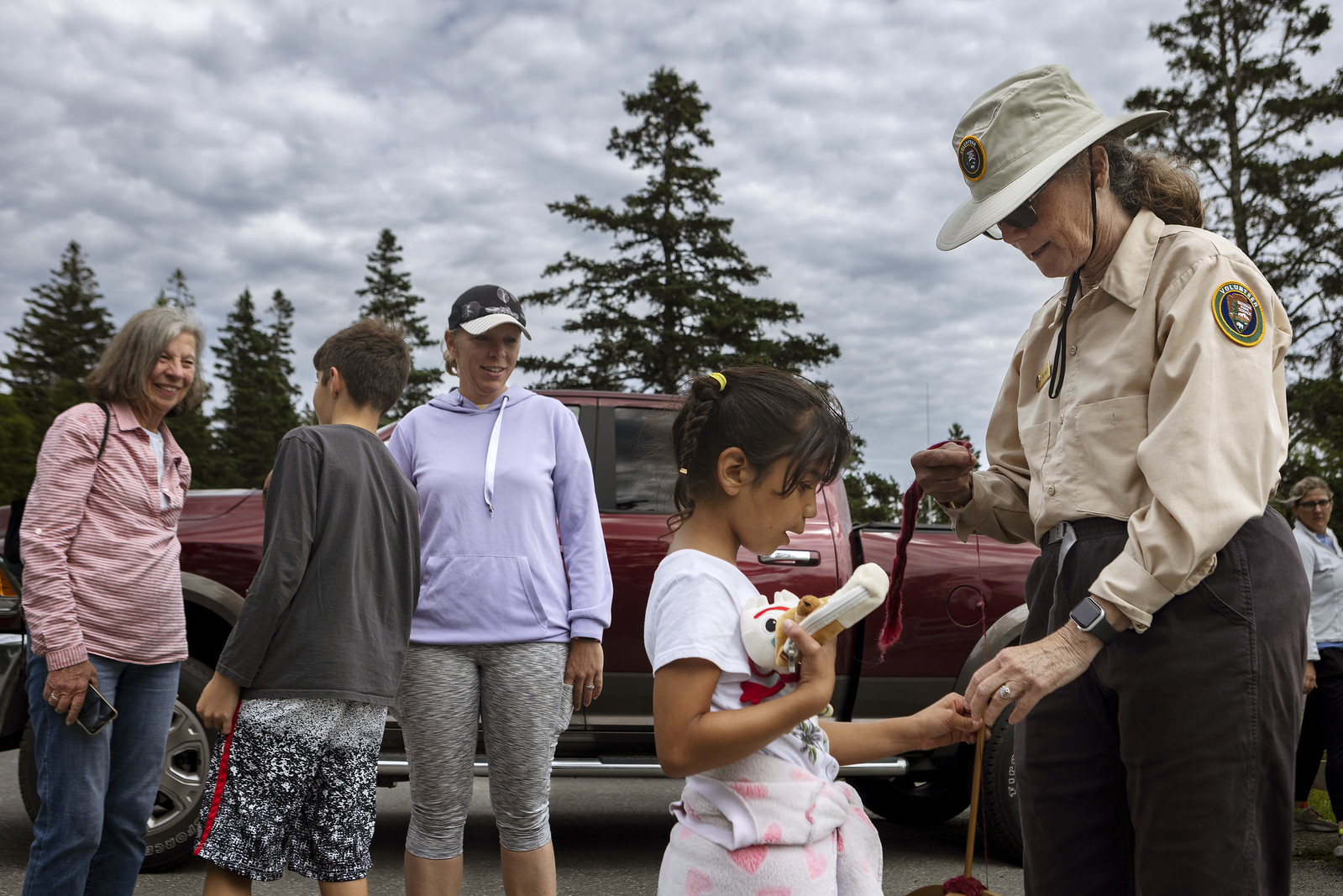 History is one aspect of what has attracted Lynne to light stations. “You can read the stories about the families who came before you,” she said, adding, “And they’re always in gorgeous settings.”

Another former resident of the light, Keri Conlon, said living in the light station felt like living on a boat. Keri and her then­ husband lived at the Bass Harbor Head Light Station between the spring of 2008 and fall of 2009 when he worked for the U.S. Coast Guard. “I felt intimately a part of nature and the ocean. I remember sitting at night and watching the moon make its circuit over the inky black water.”

Visitors won’t be able to experience that-the light station is closed at dark-but they can take the opportunity “to pause and reorient with nature” when they visit, said Keri. “The ocean air hits you and you hear the buoy bell. It is one of my favorite sounds in the entire world.”