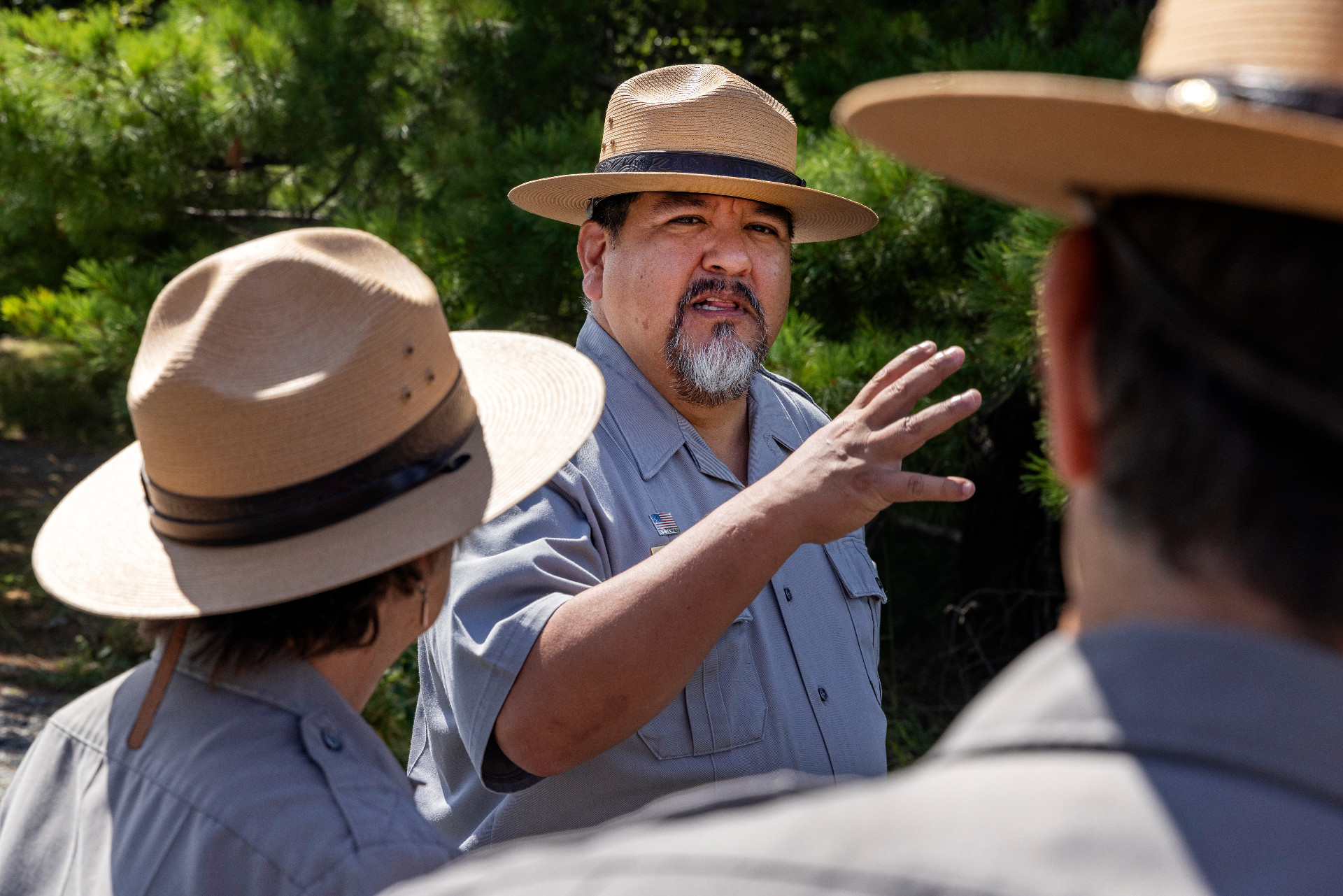 The last week of July at Acadia National Park is always busy, but this year it was extra busy and extra special.

Acadia hosted National Park Service Director Chuck Sams and his chief of staff Susan Faranelli for a week-long visit, and the National Park Foundation held its July Board of Directors and National Council meeting here. Both visits were helpful in Acadia’s efforts to build relationships with national parks leadership and to advance priority issues.

Director Sams met with National Park Service (NPS) employees, partners, and visitors to hear their concerns and ideas about the protection and enjoyment of our national parks. A primary purpose of the visit was to discuss shared priorities—including shared Tribal interests and infrastructure improvements that are part of a concerted effort to address deferred maintenance and repair needs in national parks.

The week was jam-packed with briefings, tours, and discussions on these and a host of other issues. Friends of Acadia board members and staff participated in discussions on affordable workforce housing, the need for more operations funding from Congress, and the importance of public-private partnerships to address the effects of the climate crisis at the Great Meadow Wetland, Bass Harbor Marsh, and Cadillac Summit.

“We were delighted to host Director Sams at Acadia,” said Park Superintendent Kevin Schneider. “No virtual or in-person briefing can compete with seeing issues firsthand on the ground.”

The moments that stood out for Superintendent Schneider where those where Director Sams interacted with Acadia National Park staff. “I was so proud of our team as they told him about the work we’re doing here, how we’re collaborating and engaging partners like Friends of Acadia, what our biggest challenges are today, and how we’re doing our best to rise up to meet them. Our people are our most important resource at Acadia, and I felt like we got to “show them off” to the NPS Director,” Schneider said. 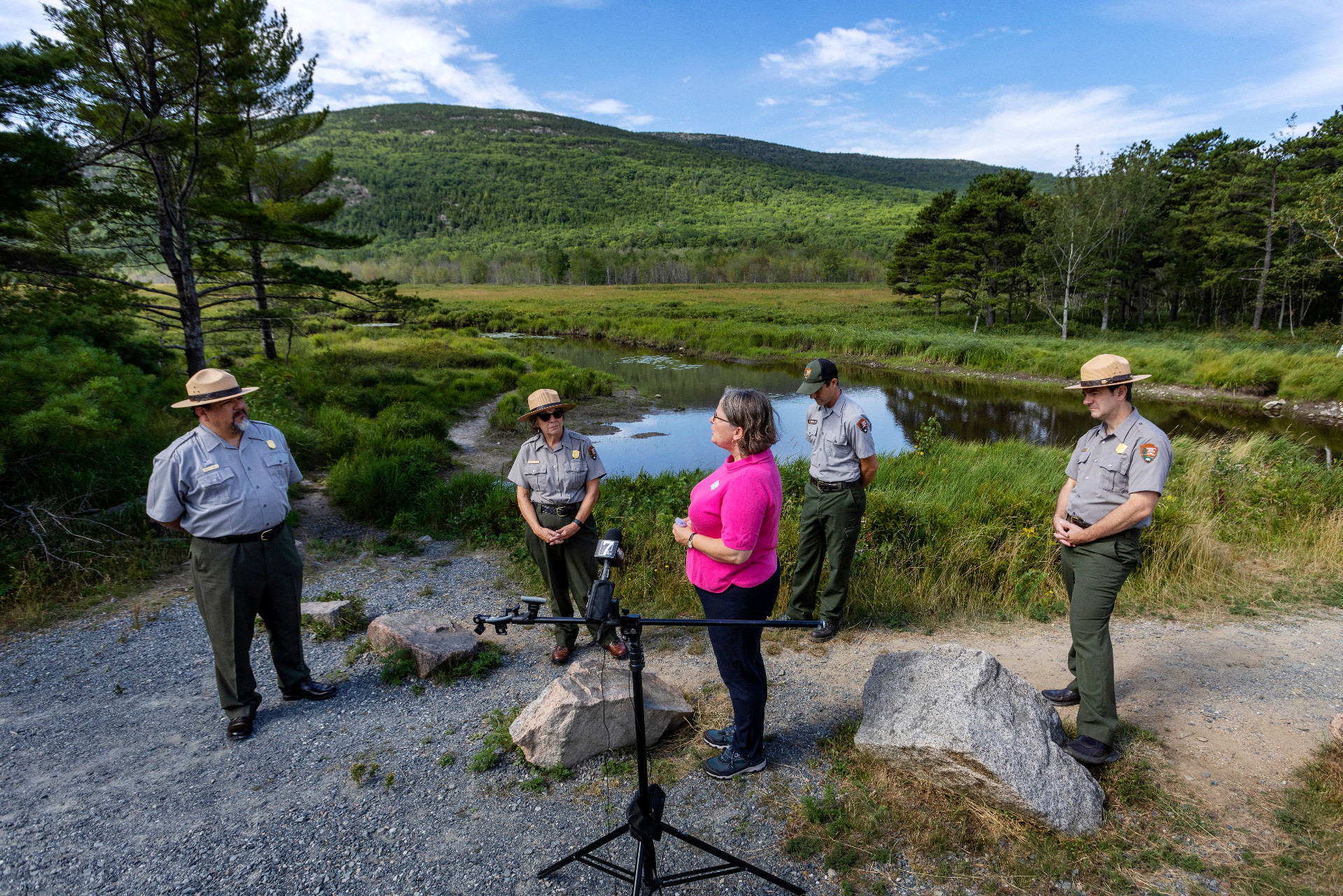 Shining a Light on Key Priorities

During his visit, Director Sams was briefed on the Great Meadow Wetland restoration project to improve the health and function of the wetland ecosystem. The project received $500K in federal funding from the Bipartisan Infrastructure Law in 2022.

Park staff explained how federal funds will be used to improve water flow and quality, reduce flooding, expand wildlife passage, remove invasive plants, restore native plants for future climates, and enhance recreational opportunities in the wetland. It builds on six years of work in the wetland by the park and its partners.

“This is a great example of climate resiliency and climate adaptation and bringing back ecosystem function into the wetlands,” Director Sams offered, suggesting that Acadia’s leadership will lay a foundation for the entire National Park System. “We’ll start aggregating that data, doing best management practices, and being able to share those best management practices so nobody is starting from square one,” he said.

The $500K in federal funding leverages significant investments by Friends of Acadia and the NPS in forward-thinking adaptive management. Sams acknowledged the importance of partnership and offered that the restoration efforts at Great Meadow would not be possible without partners such as Friends of Acadia.

“Without these types of public-private partnerships,” Sams said, “we wouldn’t be able to do nearly everything we need to do to be the good stewards we want to be and are charged to be.” 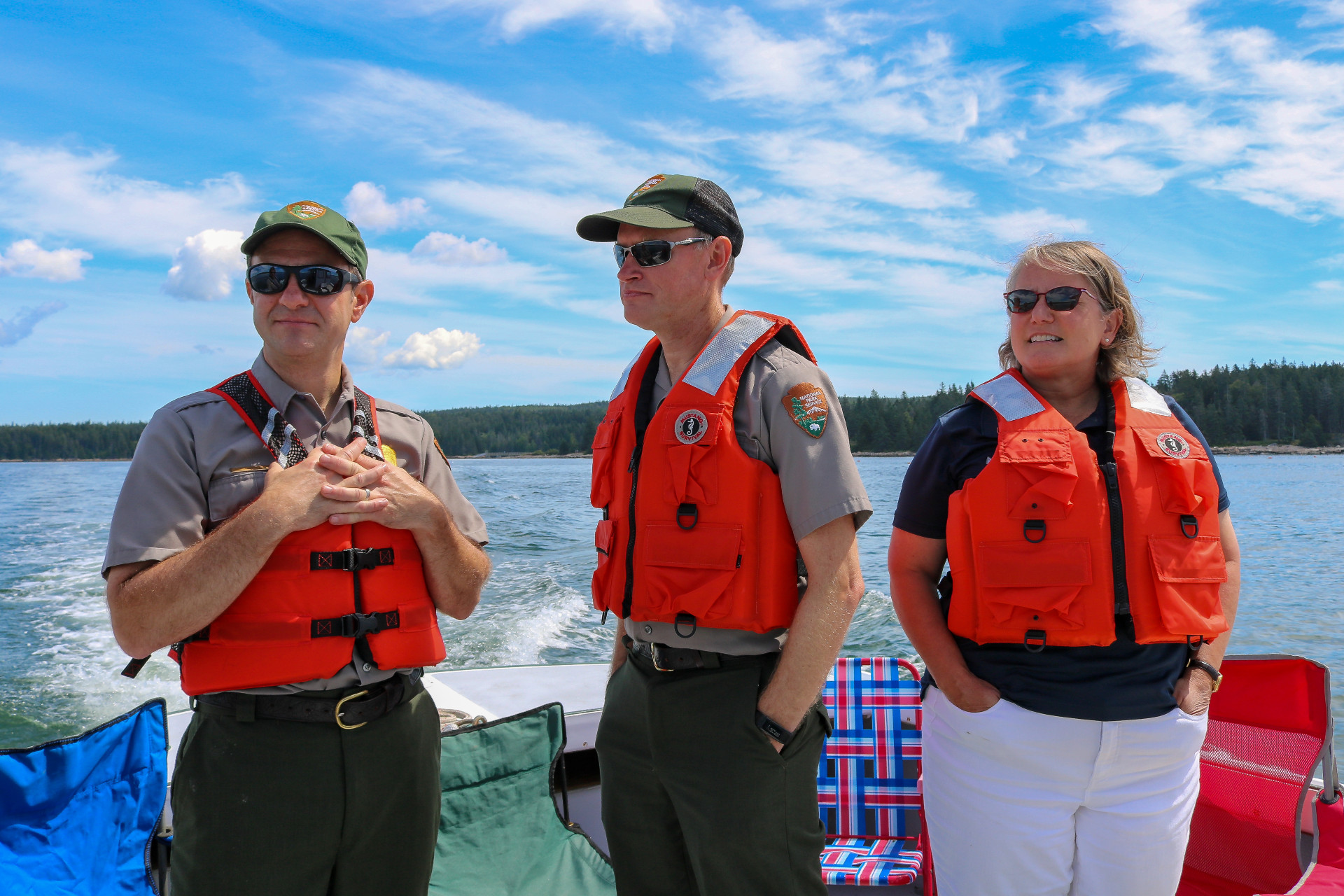 Friends of Acadia Conservation Director Stephanie Clement accompanied the Director on his visit to the Great Meadow and was happy to share how Friends of Acadia is supporting work to improve the health and functionality of the wetland.

“About five minutes before the Director arrived at the Great Meadow, an otter popped up on one side of the culvert, ran over the Park Loop Road, and swam off into the stream on the other side, perfectly demonstrating why the park needs to replace the undersized culvert at the outlet with an open-bottomed bridge that will keep wildlife safe,” Clement said.

No, that “otter moment” was not planned and couldn’t be recreated for the Director and the reporters present at the briefing.

The Bass Harbor Marsh ecosystem restoration project will receive funding of $400K from the Bipartisan Infrastructure Law in fiscal year 2023. This project also leverages funding from Friends of Acadia and involves collaboration between the park, Friends of Acadia, and Schoodic Institute.

The marsh is threatened by sea level rise and disturbances from invasive plants that have impacted 156 acres of uplands surrounding the marsh. It is the largest salt marsh in the park and is a culturally significant landscape for traditional harvesting of sweetgrass by Wabanaki people from the four federally recognized Indian Tribes affiliated with Acadia.

Director Sams also met with Wabanaki scientists and sweetgrass gatherers who are working to restore this culturally significant practice to the park. 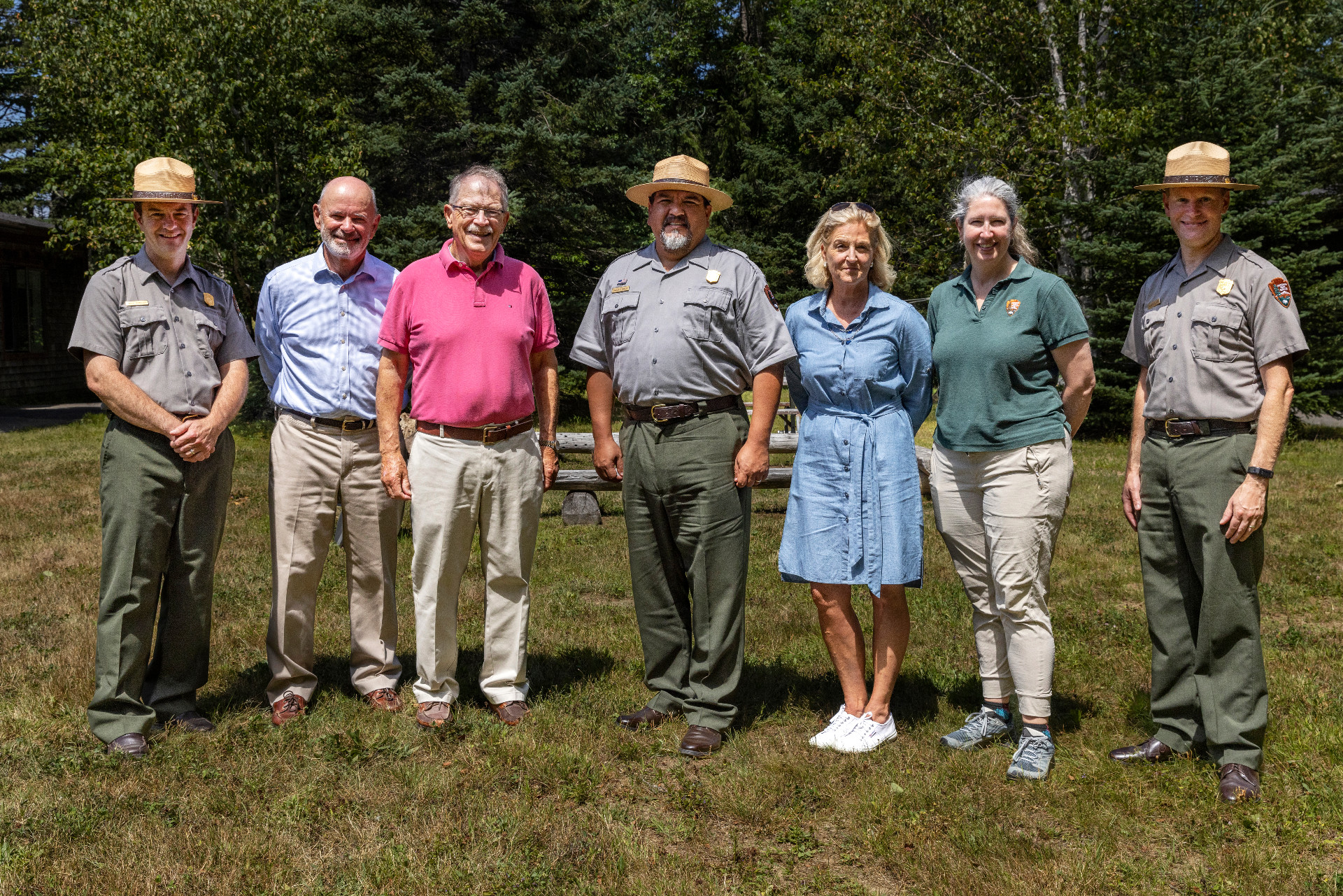 Superintendent Kevin Schneider (L) and Deputy Superintendent Brandon Bies (R), and Friends of Acadia board members Dave Edson, Jack Kelley, and Anne Green, met with Director Sams and his chief of staff to discuss housing and a host of other issues. (Photo by Ashley L. Conti/Friends of Acadia)

Friends of Acadia Board Chair Jack Kelley had several opportunities to meet Director Sams and said he was “approachable, engaged, and sympathetic to a host of issues raised.” Kelley was joined by board members Anne Green and Dave Edson, as well as former Friends of Acadia President David MacDonald, for a discussion with the Director and park leadership about the need for investment in affordable workforce housing in our national parks.

Sams toured existing employee housing units and a potential area to be developed for employee housing in Acadia. Park managers, partners, and employees all stressed that modern and affordable housing is an increasingly critical component needed to attract and retain employees.

Superintendent Schneider participated in a panel discussion about employee housing as part of the National Park Foundation’s board meeting. “It was gratifying to see the National Park Foundation Board recognize the importance of employee housing and wrestle with strategies to help the NPS address this critical need,” Schneider said. “These are major issues for us at Acadia, as we are struggling to provide housing for our workforce.”

“I think the real benefit of the visit will be as Director Sams travels to other parks around the country and shares the great work that is being done here in Acadia,” said Friends of Acadia Conservation Director Stephanie Clement. “A very special thanks to Park Superintendent Kevin Schneider for facilitating Friends of Acadia’s participation and carving out quality time for substantive discussion.”