With this feature, we continue our series recognizing women of Acadia, both past and present. Here we pair Acadia National Park Curator and Cultural Resources and Interpretation Liaison Marie Yarborough with Ardra Tarbell, who served in park administrative roles from 1930 to 1969. One treasure in the archives Yarborough oversees is an audio interview with Tarbell. Yarborough marvels at the juxtaposition of the “calm, lulling, deliberate, gendered-of-her-time voice” with the reality that Tarbell was a “powerhouse.” 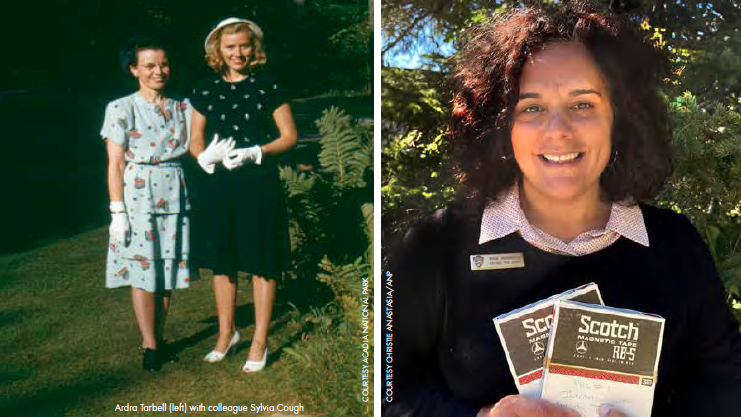 This is a feature in the Women of Acadia: Then & Now series recognizing women of Acadia, both past and present. View the full series.

Ardra Tarbell, a 25-year-old from Aroostook County, met George Dorr on her ﬁrst day of work at Acadia National Park in 1930. That was the beginning of a close working relationship for the next 14 years. Tarbell’s business training and professional administrative skills helped ensure the stability of park operations during the early years of land transfers and challenging events of the Great Depression, World War II, and the Great Fire of 1947. Her lasting impact will be not only these administrative contributions but also her detailed and sensitive oral history of the time she served Acadia and worked in Bar Harbor.

Marie Yarborough’s summer jobs as a teenager—delivering newspapers, shelving library books, and welcoming guests at a museum café—foreshadowed her future as a cultural anthropologist and collections curator. Today she is still managing “repositories of knowledge”—and with the same passion of that girl back in suburban Connecticut.

“I always loved museums,” she says.

Acadia National Park’s collections give visitors a look into the natural and cultural history of Acadia, the Cranberry Isles, and Mount Desert Island, as well as the management of Acadia and the Saint Croix Island International Historic Site. Objects, photographs, and historic audio ﬁles help ignite the imagination.

Yarborough’s responsibilities as curator of the William Otis Sawtelle Collections and Research Center range from protecting the collections to ﬁelding research requests to handling special projects. One minute she is checking mousetraps and humidity controls. The next ﬁnds her working with developers to create a virtual tour of George Dorr’s former estate, downloadable as an app, the ﬁrst of a cultural site that Acadia ever produced. She also serves as cultural resources liaison to the park’s Division of Visitor Experience and Education.

That’s a lot of balls in the air—with a few under the leg and behind the back—but it’s not surprising for someone who is a researcher, mom, restaurant co-owner, and elected school board member. Currently, some of Yarborough’s most compelling research focuses on Thomas Frazier, potentially the ﬁrst documented free African-American who lived in Hancock County between 1774 and 1820 and served in the American Revolution. It’s a project she refers to as “Finding Private Frazier.”

Yarborough’s work today grows boldly from her academic studies. She earned her bachelor’s degree from Wheaton College in Massachusetts, where she majored in Cultural Anthropology. At the time, she thought, “I don’t know what the heck I’m going to do with this degree, but I’m going to study this because I love it.” Later, she added a master’s in New England and American Studies from the University of Southern Maine.

That commitment to learning required not only passion but some sacriﬁce. “I needed two jobs to pay for school,” she says. “I would get my check and go directly to the bursar’s ofﬁce to sign it over.”

Maybe that’s why she is driven to learn more about “the underdog,” as she says. She is bringing a new perspective to cultural history. “I want to tell stories at Acadia that are beyond those we tell over and over again, to include Native people, people of color, women, local people.”

“You’d have no problem ﬁnding an article about George Dorr or Charles Eliot. You will be hard pressed to ﬁnd content built around women and their roles in the founding of Acadia,” she adds.

One of those stories is that of Ardra Tarbell. Near the end of her 39-year career with the National Park Service, Tarbell sat down in an ofﬁce, with phones ringing and typewriters clicking in the background, to record her experiences with an unidentiﬁed interviewer who was particularly curious about George Dorr.

“That interview wasn’t really about Ardra and about women and their roles. It was about George, but what can I glean from this?” asks Yarborough. “That’s where we’re at today.”

From the serendipitous oral history told in a soft, steady voice with a distinct Maine accent, listeners hear a story of a young woman’s self-determination and quiet ambition. For example, anticipating the impact of the Wall Street crash of 1929 on her burgeoning business career in Aroostook County, she hedged her bets by taking the federal civil service exam. It paid off in an offer to come to Acadia National Park.

Tarbell displays both touches of humor and masterful recall. From construction projects to stafﬁng, she could peg events in time and cite speciﬁc titles of personnel according to payroll records.

Despite the interviewer’s best attempts to zoom in on Dorr, the lens widened.

Today’s National Park Service wants to offer a more meaningful experience to a wider range of visitors. Yarborough says, “All these people coming to Acadia now want to know how this park may be connected to them. They want to hear a different story.” And she’s ready to tell it.