Changes in climate, when combined with other environmental changes like pollution and invasive species, have altered the park’s forests, lakes, and coasts forever.

Read more in this series about how scientists and experts in Acadia are leading the way in developing a new framework for how national parks manage this rapid environmental change. 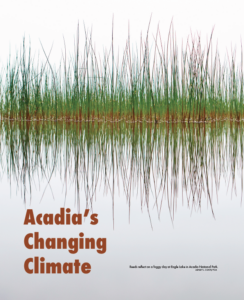 Acadia National Park is a measurably different place than it was when it was founded 105 years ago.

Average temperatures have warmed by 3°F since 1890. Six inches more precipitation falls each year on average, with bigger storms, more rain, and less snow than in the past. Sea levels have risen by eight inches since 1950, and growing seasons have lengthened by more than two weeks.

These changes in climate, when combined with other environmental changes like pollution and invasive species, have altered the park’s forests, lakes, and coasts. One of every six plant species found on Mount Desert Island in the late 1800s no longer occurs on the island, and many more native plant species have declined in abundance, whereas non-native plants have become more common.

Bird populations are shifting too; some species, like boreal chickadees, no longer breed in Acadia, and others have newly arrived and breed here routinely. Coastal ecosystems, archeological sites, and roads, including Acadia’s carriage roads, are punished and eroded by stronger coastal storms.

These changes are dramatic but can be surprisingly difficult to see. Visitors still see majestic rocky coasts, spectacular forests, and beautiful lakes and streams. For most of us, it is hard to notice changes in individual plant or animal populations, or the steady rise in sea level. But those who watch closely—the many scientists, naturalists, and other nature watchers we have in our Acadia community—have noticed.

In contrast to these hard to see changes, many people may not realize that most of the visible changes to Acadia have also been caused by our changing climate. The park is busier well into November, in part because it is warmer longer. Winter storms now routinely damage the railings at Thunder Hole, requiring frequent repairs. And ticks, which carry Lyme and other diseases, have become more common as our winters warm and growing seasons lengthen.

Unfortunately, the pace of change is speeding up. In time, climate-driven changes in Acadia will be noticeable to most everyone. Nine of the 10 most common tree species in Acadia—species like spruce, cedar, and fir—will likely decline or disappear from the park in the next 80 years. Our forests will shift from large swaths of evergreen trees to forests more like those on the eastern part of Mount Desert Island that burned in the fire of 1947 and grew back as birch, maple, and oak. That will mean more color in the fall, more leafless trees in winter, and more new green leaves each spring.

The transition will probably not be smooth. We may lose some species suddenly, like we did the red pine, killed by invasive red pine scale throughout Acadia over the past six years. Hemlock and ash could be next.

With these changes comes a sense of loss. But there is also urgency to act to keep Acadia’s resources healthy. You can help. To find out how, please visit friendsofacadia.org/climatechange/ or nps.gov/acad/learn/nature/climate-change.htm.

DR. ABE MILLER-RUSHING is an ecologist and the science coordinator at Acadia National Park 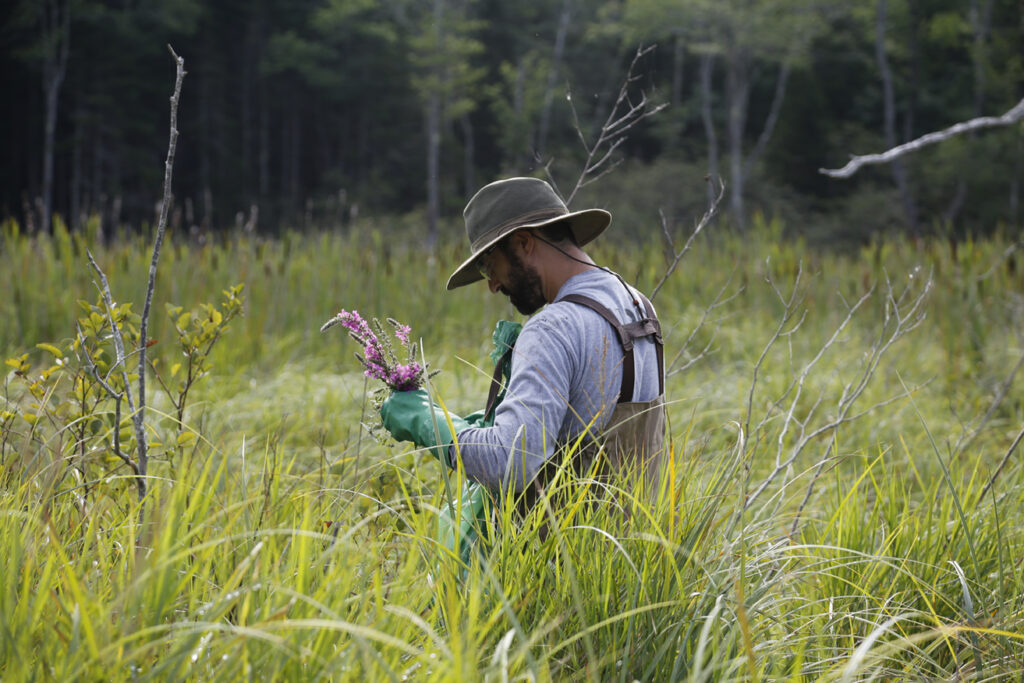 Ongoing and future climate change affects all aspects of park management, including natural and cultural resource protection, operations and infrastructure, and visitor use and experience.

Climate change also presents an opportunity to recognize, appreciate, and work with the dynamism of nature; to work across large landscapes and long spans of time; and to recognize the emerging relevance of parks and other protected areas for climate change mitigation and adaptation. Mitigation is reducing the concentration of greenhouse gases in the atmosphere by cutting emissions and storing or sequestering carbon. Adaptation is, in simple terms, adjusting to changing conditions.

Climate change is an opportunity to move beyond assumptions of a single past condition or reference state for Acadia. For more than a century, the past has guided management interventions to preserve and restore the structure, composition, and function of landscapes.

But climate change challenges this one-size-fits all approach, and strongly points to a future that will not resemble the recent past. For example, Acadia’s plants and birds are already different than they were when the park was founded, and they will be changing more in the coming years. The past, therefore, cannot be the sole guide for the future; this is a core challenge of adaptation.

There is no single adaptation option that is appropriate in all situations; rather, the appropriate strategy will vary across resources, locations, and time. For example, many resistance strategies are suitable in the near term but are likely to become increasingly risky and costly as time goes on. The stewardship response to climate change therefore needs to be continuous, and continually reassessed.

This paradigm shift in management is promising and will take many decades to fully form, but managers and partners at Acadia National Park are already applying this framework.

Invasive plant management is an example of resisting an undesired change. Larger culverts are an example of accepting and adapting to the heavier rain events driven by climate change. Restoration experiments in the park by Schoodic Institute and partners, including examining how tree species will fare under a changing climate and evaluating vegetation plantings on the summit of Cadillac Mountain, provide managers with critical information on how to direct change toward desired future conditions.

Friends of Acadia’s Wild Acadia Initiative and other projects are in turn helping park staff apply the RAD framework to on-the-ground actions that will help steward the future of Acadia.

In May, The New York Times did a comprehensive piece on the RAD concept titled, “What to Save? Climate Change Forces Brutal Choices at National Parks,” in which Acadia National Park was featured. You can read the article at nytimes.com/2021/05/18/climate/national-parks-climate-change.html.

DR. NICK FISICHELLI is the President and CEO of Schoodic Institute and co-author of “Resist-Accept-Direct (RAD) – A Framework for the 21st-century Natural Resource Manager.” 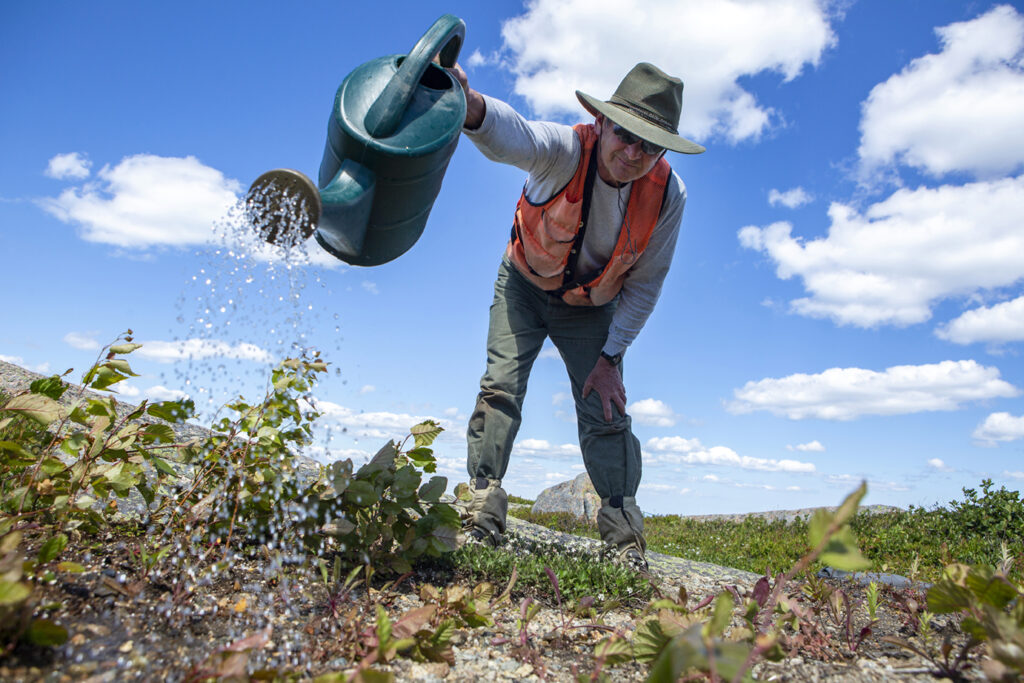 Many visitors to Acadia National Park are familiar with the stunning views and congested traffic on Cadillac Mountain, but most are less familiar with the loss of the summit’s fragile subalpine plant communities.

Among the large areas of bare or lichen-covered granite are pockets of soil and plants. More than 150 years of trampling has damaged these low-lying plants and the intense rainfall and longer dry periods caused by climate change have combined to wash away much of the thin summit soils.

Starting in the 1990s, park staff roped off sections of remaining summit plants and asked visitors to avoid certain areas in an attempt to stem the loss. Unfortunately, these special plant communities are very slow to regenerate on their own.

In the last few years, with help from the Schoodic Institute, Native Plant Trust, and Friends of Acadia, park staff have begun to restore these pocket communities from the soil up. They have been testing different approaches to see what works. In this fifth year of restoration, staff and volunteers brought in a specialized sterilized soil mixture to replenish the soil lost from erosion. They planted seedlings grown from locally collected seeds to help stabilize the soil and rebuild the plant communities.

With a grant from the BAND Foundation and National Park Service funds, the team will continue the restoration work and will use the lessons they learn to expand restoration efforts to other summits in Acadia.

This work is part of the Wild Acadia Initiative—a multifaceted set of programs to help Acadia’s native plants and wildlife thrive despite threats from climate change, invasive pests, and other rapid environmental changes. The approach the park is taking to evaluate vegetation plantings on the summit of Cadillac Mountain and other Wild Acadia locations (e.g. Great Meadow anbd Bass Harbor Marsh) is an example of directing change, a new approach for the National Park Service. (See story on page 16).

BRIAN HENKEL is Friends of Acadia’s Wild Acadia Project Coordinator. Abe Miller-Rushing is an ecologist and the science coordinator at Acadia National Park.