What Next for the Historic Maple Spring Trail?

A Climate-Scenario Planning Workshop is part of the park’s new management approach to managing climate change in Acadia. 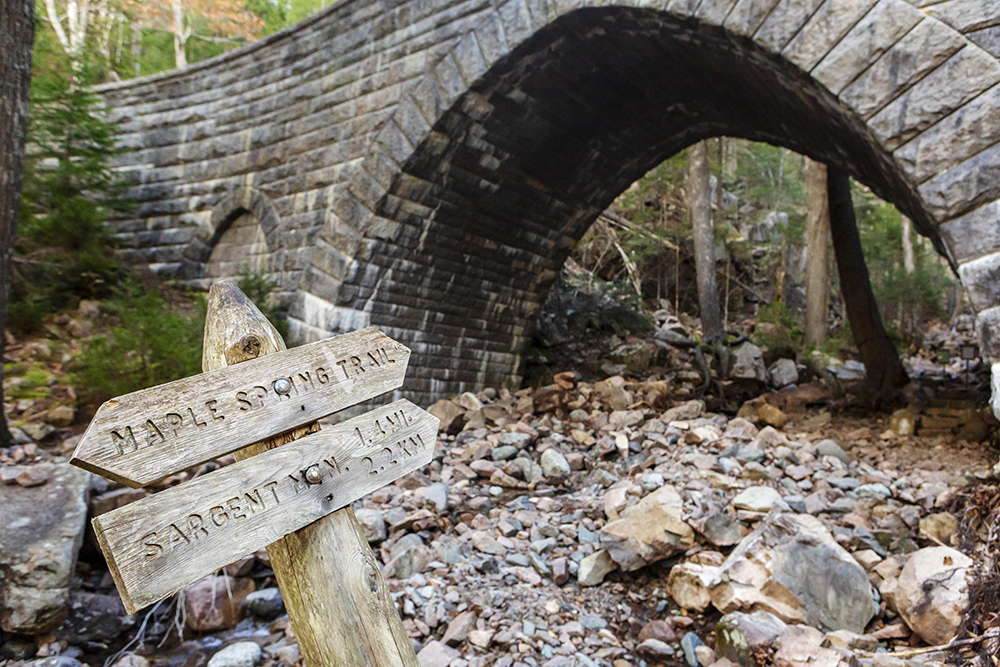 Signage indicating the Maple Spring Trail sits at an angle near the most heavily damaged section near the Hemlock Bridge in Acadia National Park. The trail is currently closed after an early June rainstorm. Park officials, with the help of Friends of Acadia and Schoodic Institute are formulating a plan on what to do next with the section of trail. (Photo by: Ashley L. Conti/Friends of Acadia)

Early on Wednesday, June 9, 2021, rain began to fall. It had been hot, and the warm air held a lot of moisture. Inches of rain fell within a few hours.

On the bare granite slopes of Sargent Mountain, sheets of water washed over carriage roads, carrying gravel hundreds of feet into the woods. In the narrow gorge where hikers have ascended the Maple Spring Trail for more than 150 years, the rain became a torrent, ripping through roots, washing away soil, and tumbling boulders.

Within a few weeks, the National Park Service had initiated plans to fix the carriage roads. But Maple Spring Trail? No one at Acadia National Park was sure what to do.

The June storm was the latest manifestation of rapidly warming temperatures. Among the climate changes impacting Acadia, flooding is especially prominent. Annual precipitation has increased by six inches over the last century. There is more rain and less snow, and more frequent intense storms.

The devastation along the Maple Spring Trail was enough to break the hearts of the Acadia Trails Crew, the master builders who had rehabilitated the trail just eight years ago.

You can only get your heart broken so many times before you decide it’s time to make a change.

After a pandemic summer that saw record numbers of visitors, a warm fall when it seemed the leaves would never change color, and back-to-back Nor’easters that flooded some of the same carriage roads that washed out back in June, everyone at Acadia National Park was ready to try a different approach to deciding what to do about the Maple Spring Trail. 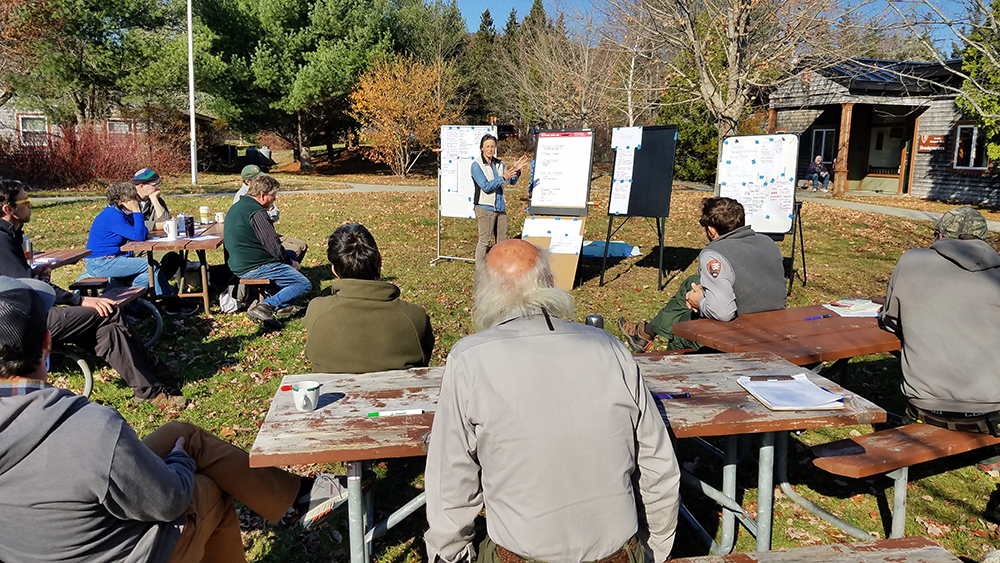 Park officials, with the help of Friends of Acadia and Schoodic Institute, meet to consider options on what to do next with this heavily damaged section of the trail. (Photo by Stephanie Clement/FOA

In early November, park leaders, rangers, scientists, historians, and the trail crew came together to evaluate their options under climate scenarios recently developed by the Park.

“This is the first time we are evaluating a trail as a group,” said Gail Gladstone, Acadia’s Cultural Resources Program Manager, who helped organize the workshop. Gladstone is overseeing the listing of Acadia’s hiking trail system on the National Register of Historic Places. The National Historic Preservation Act requires federal agencies to consider the impact of management actions on historic properties.

With decades of experience building and rebuilding Acadia’s historic hiking paths, trail crew members could not help but imagine reconstruction. But, having seen the power of the June runoff, no one could be sure that even big blocks of granite wouldn’t also wash away during the next deluge. They wanted to hear the perspectives of other park departments.

“We want to know, what does the science tell us?” said Trail Crew Leader Gary Stellpflug.

“Is what we are doing going to last, given everything with climate change?” asked Trail Crew Leader Christian Barter.

The uncertainty of Acadia’s future climate hung like a cloud over the two days of the workshop. 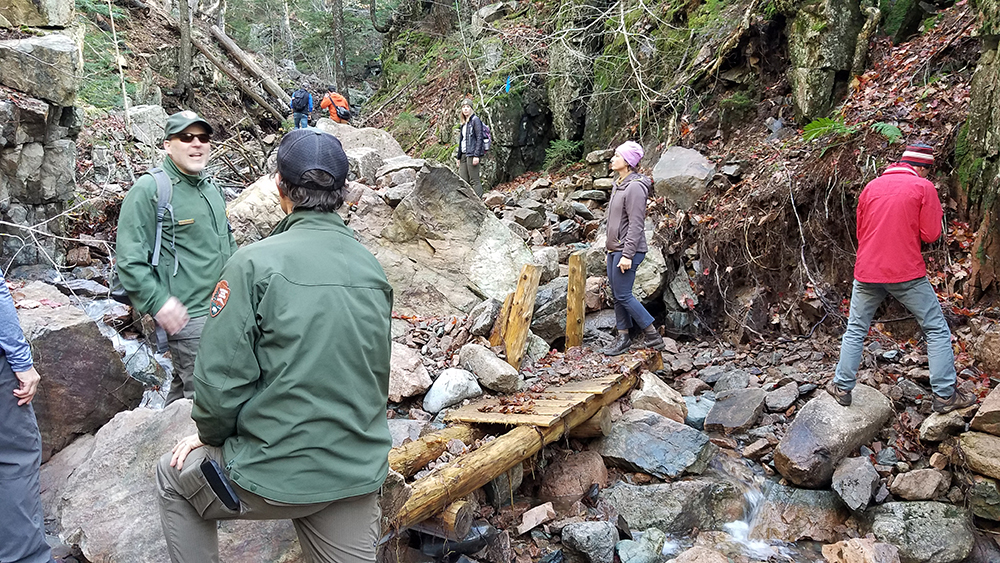 ANP and FOA staff survey damage to the Maple Spring Trail during a site visit in November 2021. (photo by Stephanie Clement)

The June 9th rain was part of a belt of highly localized, fast- moving convective storms estimated to be of the size that only occurs every 250 years or more, according to Charles Hebson of the Maine Department of Transportation. “There is much uncertainty in assigning probabilities to such extreme events, so this is best understood as a rare extreme rainfall event well outside the limits of standard design,” he said.

At its most intense moments, rain fell at a rate of two inches per hour. “This same volume over 24 hours would not have been nearly so damaging,” said Hebson.

“We have an array of things that happen now that we didn’t used to have to deal with,” said Brian Henkel, a hydrologist and Wild Acadia Coordinator with Friends of Acadia. “I started this job six years ago and it’s just been storm after storm after storm.”

Restoring park trails inspired the creation of Friends of Acadia in 1986. Thirty-five years later, it’s clear that the park’s drainage infrastructure was not designed for today’s precipitation. When the park rehabilitated the Eagle Lake carriage road this year, they used larger culverts and raised its elevation where it had been repeatedly flooding and washing out. As simple as this seems, it goes against a preservation philosophy that supports repair and restoration, but not much remodeling.

“Our first instinct is to put things back together again, like Humpty Dumpty,” said Schoodic Institute President and CEO Nick Fisichelli. “But we need to adapt. We need to change along with the climate.” Fisichelli recently co- authored the Resist-Accept-Direct Framework for climate change adaptation that was being applied in the Maple Spring Trail workshop.

Maple Spring Trail before and after the June 2021 rain event. (Photo by Will Newton/FOA)

To re-build the trail as it was would be “resistance” to a wetter future. But the seasonality of flows that once left the stream route dry when most people used it, is no longer reliably predictable.

To close the trail permanently and delete it from the trail system would be “accepting” the likelihood of recurring damage. Many workshop participants had difficulty envisioning this option.

Other options included modifying the trail to accommodate more and bigger rains, or re-routing it along new paths, both a kind of “directing” response to climate change. But these, too, would have impacts on the environment, said biologist Bik Wheeler, who offered the perspective of someone who works with endangered species. “I’m used to letting things go. We need to get

comfortable letting go of some things—that’s what climate change planning is.”

Cost and time are major considerations. Of course the trail crew could fix it, but at what cost? What work on other trails would not get done because all efforts would be directed at Maple Spring?

Visitor behavior and perceptions are also factors. If the park does nothing, the trail would continue to erode and potentially be dangerous for visitors who would still use  it, said Chief Ranger Thérèse Picard. “At this point, it’s very unstable.” Picard spent nine years at Zion National Park dealing with flash flooding and related trail closures, both temporary and permanent, and thinks about search-and- rescue operations. “When do we say ‘uncle’?”

“Doing nothing isn’t a real option,” said Acadia National Park Superintendent Kevin Schneider. “All of these choices are actions of some kind – so ‘doing nothing’ is not possible.” 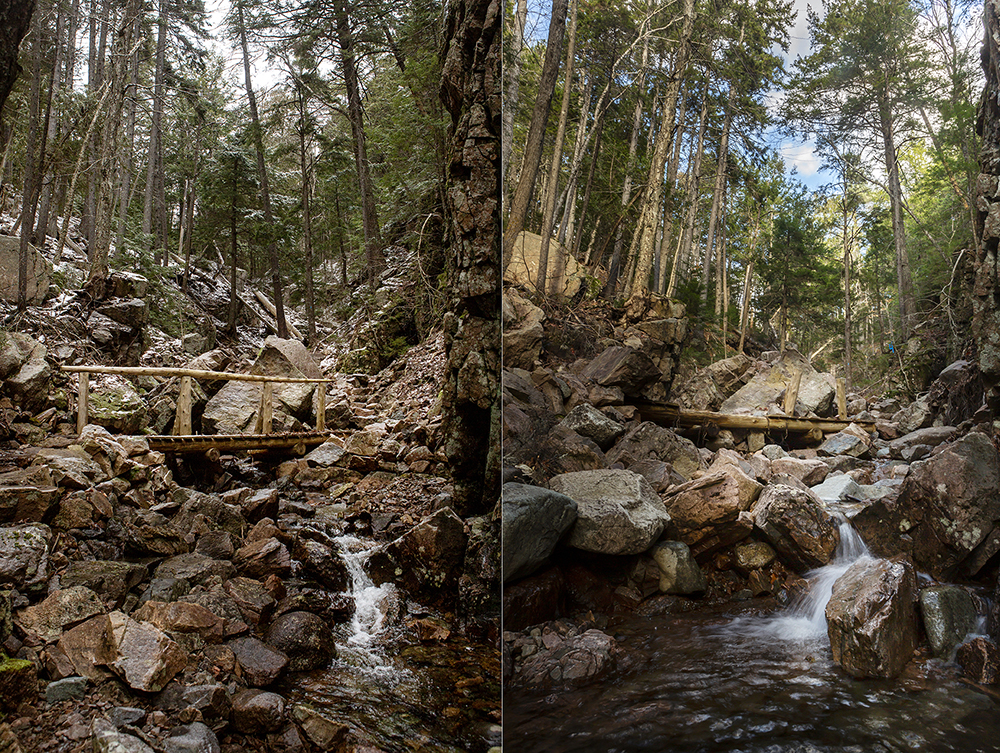 Maple Spring Trail before and after the June 2021 rain event. (Photo by Ashley L. Conti/FOA)

What Next for Maple Spring Trail?

The goal of the workshop wasn’t to make the decision, but to gather enough input and information for the trail crew to come up with a plan.

“We will continue to monitor the situation as the trail crew evaluates the options, including costs,” said Chief of

Facilities Management Keith Johnston. But they also agreed that they will have to make a decision before too long, even if the decision is to take relatively small steps and adapt management of the trail as conditions change.

Environmental Protection Specialist Jason Flynn, who helped organize the workshop with Gladstone and Abe Miller- Rushing, expressed gratitude to the participants. “It shows the value of the trail network, and this process, that everyone spent a day and a half to listen to each other and try to figure this out. These are hard decisions, but we can sit down together and work through them.”

Whether or not the decision sets a precedent, there is a new precedent for making decisions about responding to climate change in Acadia National Park, and for that, the Maple Spring Trail will maintain its place in park history.

CATHERINE SCHMITT is the Science Communication Specialist at Schoodic Institute.