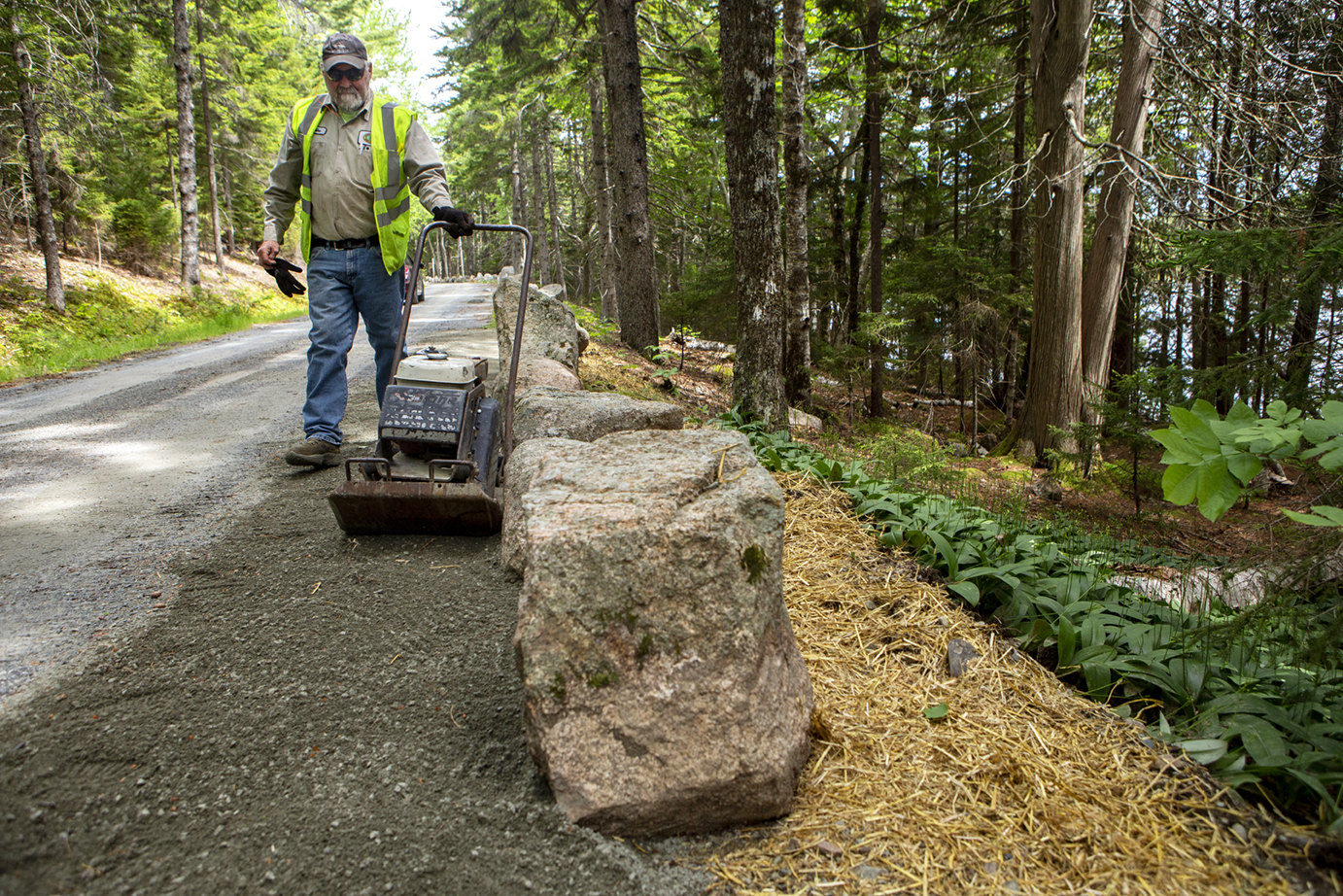 Mike Allen, foreman at Harold MacQuinn, Inc., uses a compacter to compress dirt around coping stones after ﬁnishing work to regrade an area of the Eagle Lake section of the carriage road.

RESTORING EVERY FOOT OF ACADIA NATIONAL PARK’S 45 MILES OF HISTORIC CARRIAGE ROADS HAS TAKEN A LOT OF TIME, a lot of effort and no small amount of money. It has also taken an incredible amount of muscle, both human and mechanical.

Over the past two and a half decades, much of that muscle, and the experience and expertise needed to wield it in a subtle, effective, and cost-effective manner, has come from three generations of just one Bar Harbor family, the MacQuinns. 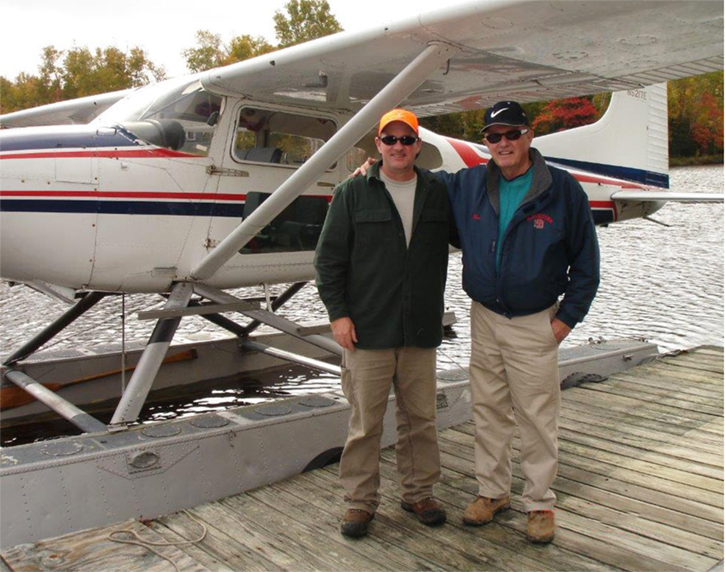 Paul MacQuinn of Bar Harbor, left, and his dad Ronnie, the second and third generations
of their family to help build and maintain Acadia’s carriage roads.

Harold was soon joined in running the company by son Ronnie who was in charge when the company was selected to widen the bridge on Route 233, over the carriage road at Eagle Lake, in the early 1970s.

The 118-foot long bridge was built in 1927. Decades later, as the Eagle Lake Road became the main east/west highway on Mount Desert Island, the state determined the bridge should be widened, but acknowledged its historic status precluded total replacement.

MacQuinn Construction’s bold and innovative solution? Split the bridge in half lengthwise. Skilled craftsmen carefully liberated the 700-ton, 25-foot-high granite block wall on the north side from the rest of the structure. The walls were then slid on special ball bearings 13 feet farther north. All this was done while striving to keep at least one lane of traffic open on the road.

Company masons then built a new center arch, all while preserving the historical character of the original.

In 1975, that herculean effort and the company’s legendary Down East ingenuity earned it two prestigious national engineering awards. Harold MacQuinn retired in the mid-1970s passing the baton to Ronnie. Harold passed away in 1984. 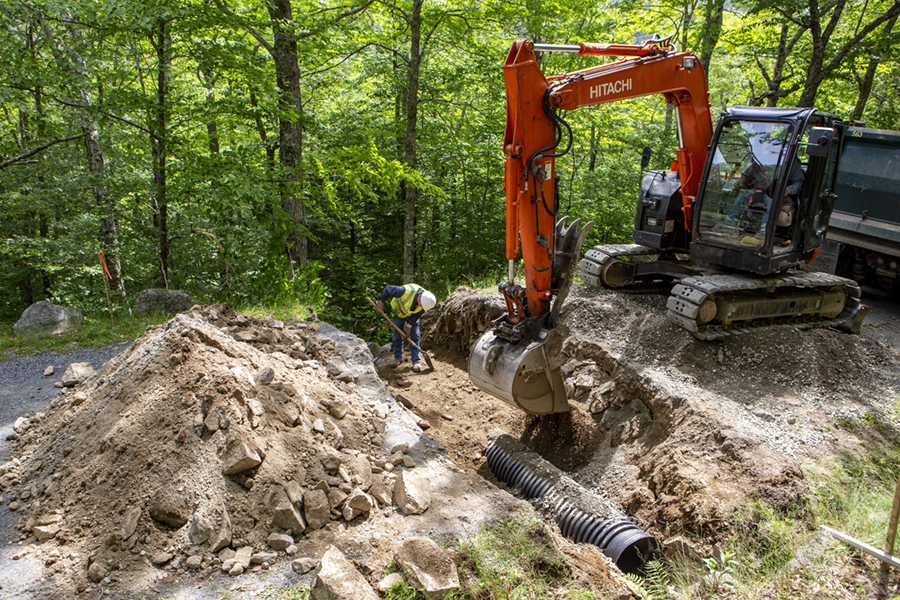 Mike Bunker, foreman at Harold MacQuinn, Inc., evens the dirt while replacing a culvert as part of the restoration of the Eagle Lake section of carriage road. 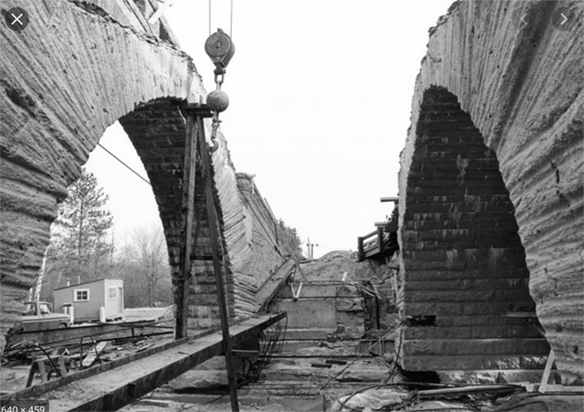 Harold MacQuinn, Inc. of Bar Harbor won a prestigious national award for its innovative work widening a historically signiﬁcant highway bridge over one of Acadia’s carriage roads in 1975.

Carriage Roads get an Overhaul Thanks to FOA Endowment

In June 1994, the National Park Service selected MacQuinn to rehabilitate the first 20 miles of the carriage roads. The carriage paths are not gravel roads in the traditional sense. They are actually “broken stone” roads. They are constructed of multiple layers of various grades of materials and compacted to exacting standards.

MacQuinn crews and equipment, under Ronnie’s direction, got the first contract to begin restoring a section near Aunt Betty Pond: digging up the surfaces, re-laying sediments to precise historic standards, replacing culverts, and rehabbing and improving ditches.

By then, Ronnie had been joined by his son Paul who, according to a company history, had been playing on and learning to operate heavy equipment since the age of 10. Paul became president of the company when Ronnie passed away in 2009. 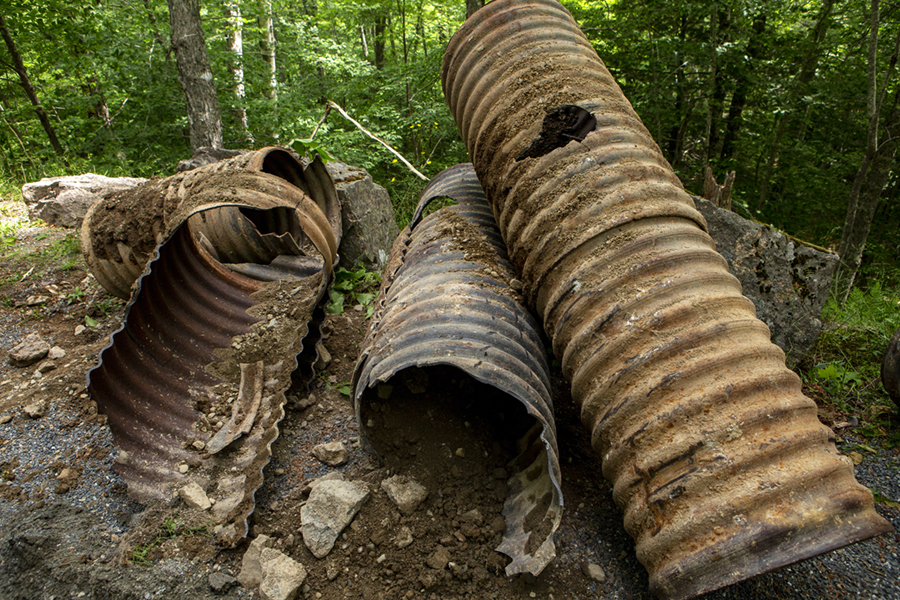 Original cast iron culvert that was recently replaced on the Eagle Lake section of carriage road. 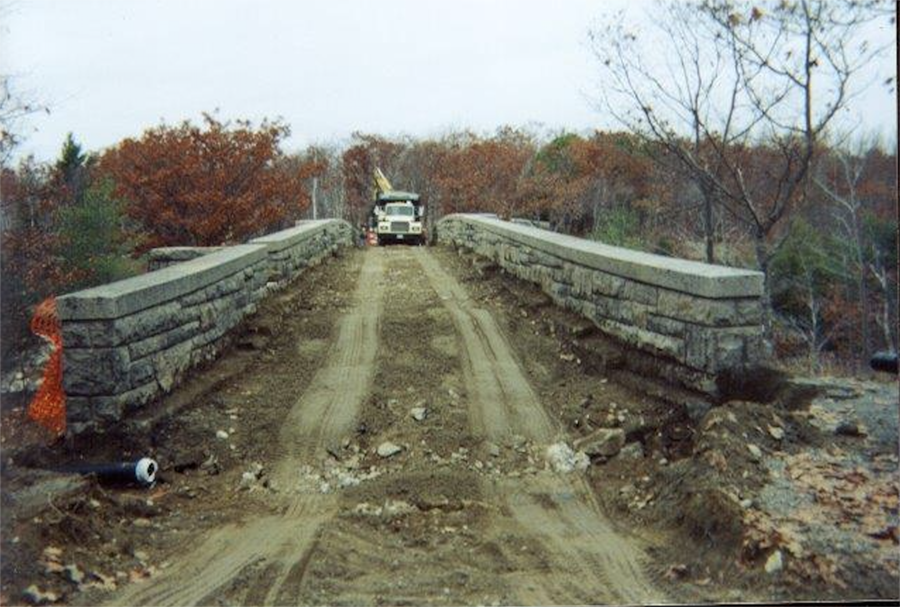 A MacQuinn Construction dump truck moves across the Duck Brook Bridge while that section of the Acadia National Park carriage roads was being rehabilitated during the 1990s.

Eagle Lake is the Last Section for Rehab

Fast forward to 2021, and again, it is Harold MacQuinn, Inc. that won the contract for completion of the last piece of rehabilitation of the 44 miles of carriage roads.

The last section of carriage road to be rehabbed, approximately six miles around Eagle Lake, is being done this season. It had been left for last as it was in the best shape when the endeavor began.

It seems fitting that the latest segment, overseen by Paul, the third generation of his family to run the company, connects with the bridge widened by his grandfather Harold in 1975 and the first section of carriage road redone by his father Ronnie in 1994.

“Visitors for multiple generations have benefited immensely from the long-term preservation experience that the MacQuinn family has brought to bear on the historic resources of Acadia National Park,” says Keith Johnston, Chief of Facility Management at Acadia.

“The gift of carriage road creation came from the Rockefellers and preservation work provided by the MacQuinn family has helped keep the legacy alive.” 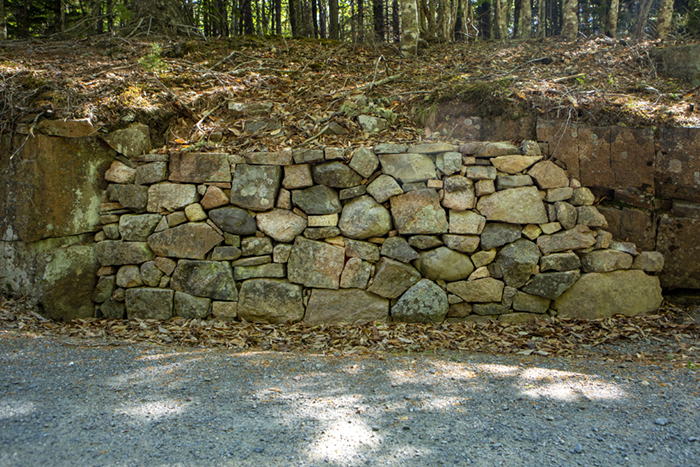 A rebuild dry-laid stone masonry retaining wall is seen during a project to rehabilitate the carriage road while preserving its historic character around Eagle Lake in Acadia National Park.

Access to Witch Hole Pond from the Eagle Lake parking lot on the north side of Route 233 should remain open, and the National Park Service hopes to keep the short distance to the Aunt Betty Pond carriage road open as much as possible.

Completion of the carriage road rehab is expected by mid-September. Visitors are advised to check the status of closures through the alerts on Acadia National Park’s website, www.nps.gov/acad.

This article appeared in the Summer 2021 Acadia magazine.