Women of Acadia: Then & Now

Home » Women of Acadia: Then & Now

Gifts for the Future

With this feature, we continue our series recognizing women of Acadia, both past and present. Here we present two sisters of the Gilded Age juxtaposed with a modern-day scientist. Their stories highlight how women’s roles have changed, yet remind us of the influence summers in Acadia can have on the trajectory of one’s life—and those of others.

THEN… the Schermerhorn Sisters, Benefactors During the Gilded Age

Annie Schermerhorn Kane (1857-1926) and Fanny Schermerhorn Bridgham (1846-1919) of New York City, were sisters who spent summers in Bar Harbor during the Gilded Age, a period of great economic, technological, and governmental transformation. They personified American upper-class opulence, along with the rise of philanthropy. After the death of her husband, who was an explorer, amateur scientist, and member of the Bar Harbor VillagevImprovement Association, Mrs. Kane provided funds to build the Kane Path, in his memory. The two sisters also donated Lake Wood and the surrounding land. But their philanthropy extended to the local community as well. Two scholarships to assist Mount Desert Island high school students with college funding still exist today. Honoring her sister, Mrs. Kane designated that her award be given to young women. 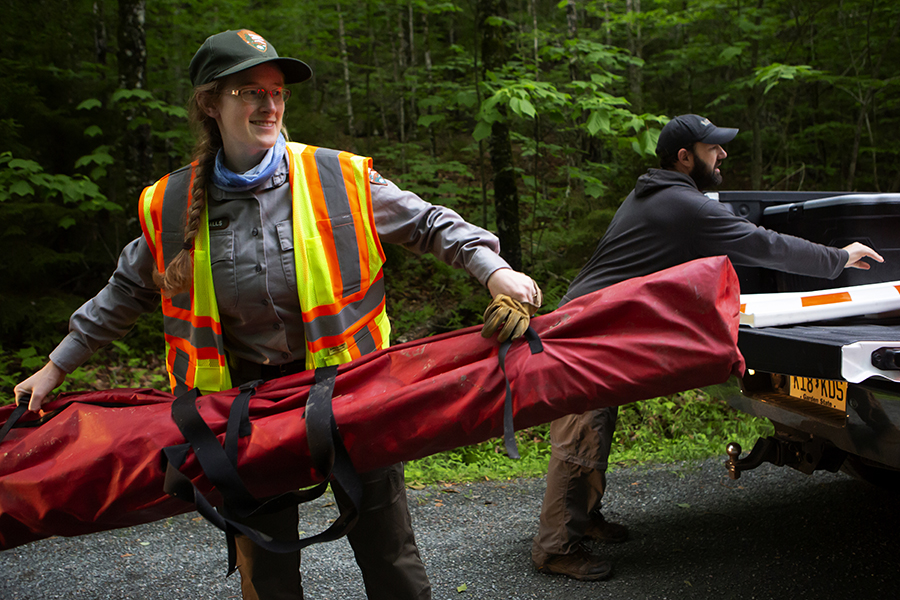 MORGAN INGALLS’ connection to Acadia began just as the Schermerhorn sisters’ was concluding. In the 1920s, her great-grandfather purchased property on Mount Desert Island, where her parents ultimately met.

Many memorable summers followed. Ingalls first “hiked” in Acadia, loaded into her father’s backpack, with her infant sister resting on his chest in a snuggly carrier. She recalls “a really sad, rundown sailboat that we’d occasionally venture out on.”

Ingalls attended a progressive elementary school near Brattleboro, Vermont. There she learned how to build a shelter in the woods—not part of a conventional curriculum, she chuckles. That education, along with her parents’ encouragement, ignited her curiosity. As she moved through college and pursued environmental studies in graduate school, so much interested her that it was hard to zero in on a career plan.

Her love of learning and the outdoors stuck. And she found her specialty: bats. Today, as a wildlife biological technician in Acadia, she studies mouse-eared bats or Myotis with keen attention. Why? “Well, they’re cool,” she says.

It’s easy to see why she thinks so. Bats are the only flying mammal. Adult females cooperatively care for pups in maternity colonies. Bats have different searching, feeding, and social calls, all at frequencies people can’t hear.

Ingalls’ role within the division of resource management protecting and managing them in the national park.

Loss of habitat, wind turbines, and a disease known as white nose syndrome have posed serious threats nationally. In Maine, the Department of Inland Fisheries and Wildlife estimates that the bat population has declined over 90 percent since the syndrome appeared in 2011-12.

“Acadia is one of the few places in Maine where a so-called ‘remnant population’ can still be reliably sampled so that we can monitor the bats’ health, reproduction, and behavior,” Ingalls says. She is pursuing questions like: Why do bats in Acadia do better than those in other parts of the state? Are there enough bats here for this population to grow? How can that occur? Can it help repopulate other areas?

Ingalls loves science because it involves asking questions like these. Plus, she’s always enjoyed the actual work of seeking answers, whether in the lab as she did as a biochemistry major, or now in her field work as part of Acadia’s wildlife team.

As far back as 2008, they set delicate “mist nets” to capture bats and band them for tracking. Since COVID, however, there has been much less capture of live animals, rising from concern that humans could transmit the coronavirus to bats.

Beginning in 2012, Ingalls began working in Acadia on a contract basis while employed at Biodiversity Research Institute, a nonprofit in Portland, Maine. She officially joined the National Park Service in 2018.

One multi-year project has addressed a dual challenge that confronted the National Park Service: how to restore Acadia’s historic gatehouses while not further endangering the female bats that roost in them. Fitting bats with radio transmitters, the technicians studied patterns and roosting areas over time. They learned, for example, that the clay tiles on the gatehouse roof retained heat, making it an optimal maternity ward. This led to specific recommendations for the repairs that occurred last year.

As compelling as the bat work is, Ingalls has other duties. In the spring, she is out with her binoculars and scope looking for breeding behavior among peregrine falcons, any of their nests, and hopefully fledglings. At other times, she is counting alewives, a species of herring whose breeding journeys between the ocean and freshwater have been interrupted by the dams humans have built.

Ingalls also works with visiting researchers who use Acadia as their laboratory. She is grateful for the stimulating work and the supportive environment she enjoys. “It’s a really good place for a woman doing science,” she says.

Though many years lie ahead for this committed conservationist, Ingalls has already established her own bequest to Acadia National Park: she is helping preserve its wildlife.