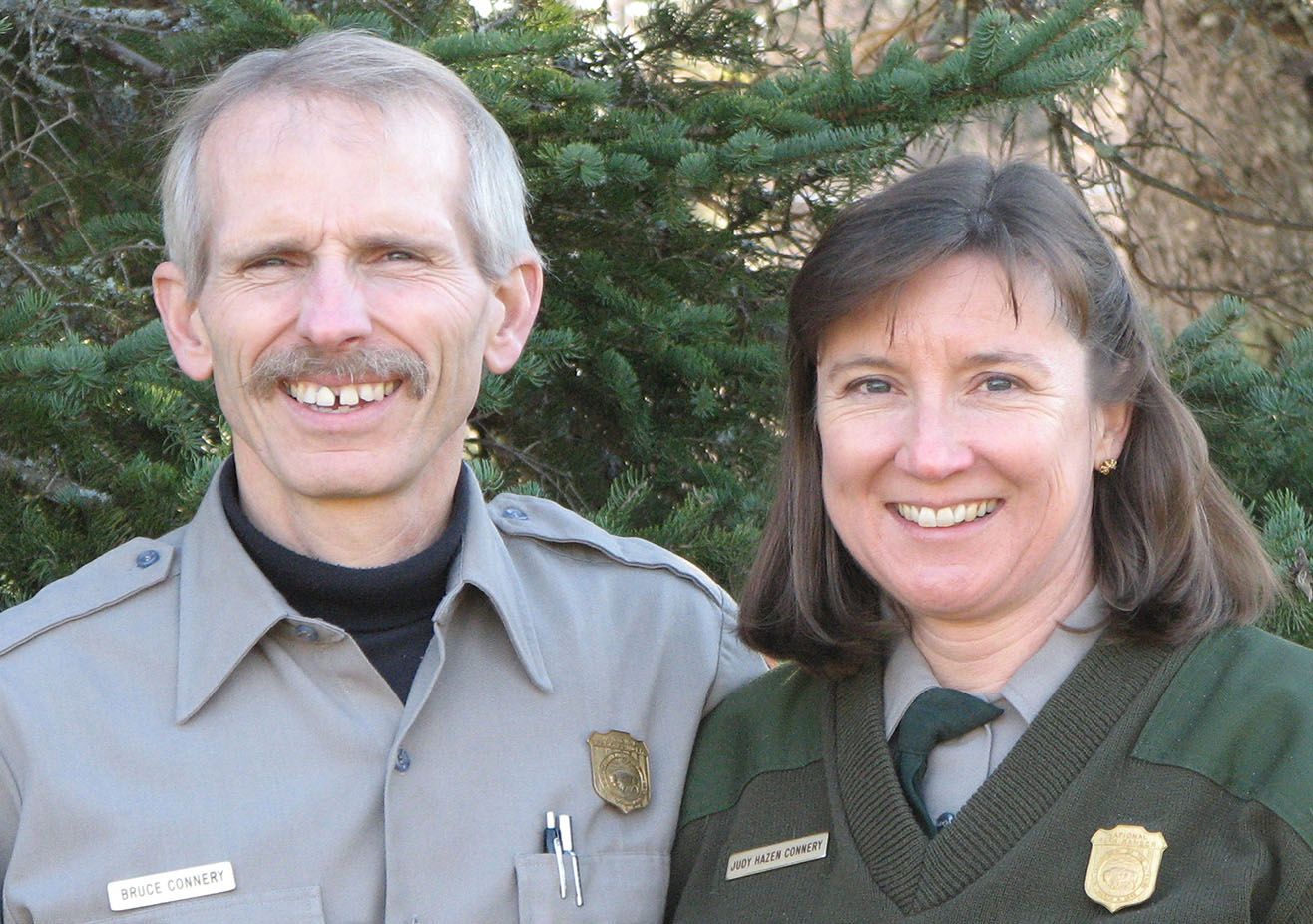 BAR HARBOR — Awards for public service, volunteerism, corporate support and distinguished service were announced during the Friends of Acadia (FOA) Annual Meeting on earlier this month.

The top honor, the Marianne Edwards Distinguished Service Award, was given to Bruce Connery and Judy Hazen Connery, retired Acadia National Park Rangers. Acadia National Park Roads Foreman Alan Farnsworth received the Outstanding Public Service Award. Volunteers who tend the Wild Gardens of Acadia were given the Excellence in Volunteerism Award. And, the Acadia Corporation, a former park concessionaire which operates gift shops and restaurants on Mount Desert Island, was given the Conservation Colleague Award.

In announcing the Marianne Edwards Award, Friends of Acadia Digital Media Team member Will Greene noted the couple’s commitment to science, education and to inspiring young conservation stewards in the park. “They were way ahead of their time in the importance they placed on mentoring the next generation,” Greene said. “They always pointed out that good science leads to good management,” he added.

Bruce, a wildlife biologist and Judy, a natural resources specialist, both retired this year and recently moved to Teton Valley, Idaho.

In videotaped acceptance remarks, Judy Connery urged former colleagues and their Friends of Acadia partners to keep up “your fantastic and vital work.”

“Thank you to Friends, so very much, for all the wonderful support you have provided to help preserve and protect Acadia National Park and its environs,” she added.

Farnsworth, who will be retiring later this year, has been responsible for all roads in the park, especially the motor-free carriage road system. He was given the Outstanding Public Service Award in honor of his nearly 30 years of work “creating daily moments of joy for visitors by providing them with safe routes to experience the beauty of Acadia in every season.”

In presenting the award, FOA Conservation Projects Manager Paige Steele praised Farnsworth for his “masterful curation of Acadia’s historic carriage and motor roads, meeting the park’s preservation standards through high-quality rehabilitation and maintenance of the roads, and for his kind and insightful leadership of numerous park staff and volunteer teams.”

During his acceptance remarks, Farnsworth praised Friends of Acadia and the group’s numerous volunteers for all their support over the decades. “I feel as I should be up here giving you guys the award. I’ve never seen such hard-working volunteers in my life.”

In announcing the Wild Gardens of Acadia Volunteers winning the Excellence in Volunteering Award, Supervisory Gardener Geneva Langley noted their triumph over adversity in restoring the garden after a disastrous flood and flash-freeze event during the winter of 2018. She praised the group’s work to not only take care of the gardens but also to raise funds and make sure visitors can continue to learn about Acadia’s native plants and natural habitats.

“I’m ever grateful for the love, knowledge, dedication, and time you bring to the Wild Gardens,” Langley said.

In accepting the award volunteer, Anne Kozak recounted the challenges of responding to damage to the garden’s plants and infrastructure during the flood and freeze. “We could not have restored the gardens to the extend we have without the support from many of you, the volunteers, park personnel, and Friends of Acadia,” Kozak said. “Thank you for sustaining us.”

FOA Director of Development Lisa Horsch Clark presented the Conservation Colleague Award to the Acadia Corporation. In addition to regular donations and in-kind support, the company also allocates a percentage of all sales from their Acadia Park Company store in downtown Bar Harbor to FOA. “They are a key part of who we are,” Horsch Clark said. “They have made gifts for 31 years,” she added. “I also want to celebrate their forward thinking and their leadership. They were among the first organizations on this island to implement an environmental management system.”

David Woodside, Acadia Corp President and CEO, said on behalf of the board and employees of the company, he was honored to accept the award. “It was important to us to continue to support this park,” Woodside said. “It’s a vital part or our legacy.”

Thanks to donors and members “2018 was another fantastic year,” said MacDonald. He noted the grants, staffing, and resources FOA made available to the park were up in 2018. “All of us are beneficiaries of this enduring wellspring of beauty and inspiration that is Acadia National Park,” he said.

In her remarks, Green highlighted the foresight of George B. Dorr who is considered to be the father of Acadia. It is that legacy that FOA strives to protect and preserve. “It has been a banner year for FOA,” Greene said. “That is highlighted by all the support we get from this community,” she continued.

Green announced that two new members would be joining the FOA Board including David Katona, and Julie Banzhaf-Stone. “I also have the privilege of announcing three new honorary trustees, Fred Benson, Cookie Horner and Jack Russell,” she added.

Clement reported that, along with funding trail and carriage road projects, advocacy efforts, and striving to increase youth diversity and educational opportunities, significant progress had been made under a wide variety of endeavors including exotic plant management, restoring ecological integrity of park watersheds, and water quality monitoring. “I’m proud of Friends of Acadia’s investing in the science that will keep us going over the long term.”

Acadia superintendent Kevin Schneider told FOA’s membership that the implementation of the recently-adopted transportation plan would be as challenging, if not more so, than the four-year process to draft the document. That process has been “like putting together a multi-dimensional puzzle,” Schneider said. “We were only able to do it with Friends of Acadia’s support.”

Following the business meeting, attendees enjoyed refreshments and conversation on the terrace overlooking Frenchman Bay. The annual meeting was held at the Bar Harbor Club on West Street.

A video of the entire meeting can be viewed online on the Friends of Acadia Facebook Page.

Friends of Acadia preserves, protects, and promotes stewardship of the outstanding natural beauty, ecological vitality, and distinctive cultural resources of Acadia National Park and surrounding communities for the inspiration and enjoyment of current and future generations.

For more information about Friends of Acadia visit www.friendsofacadia.org, or call 207-288-3340.